Celeste Buckingham is an 18-year-old singer who first found fame appearing on the Czech version of American Idol. Most recently she was also nominated for a Radio Disney Music Award for the Best New artist category! 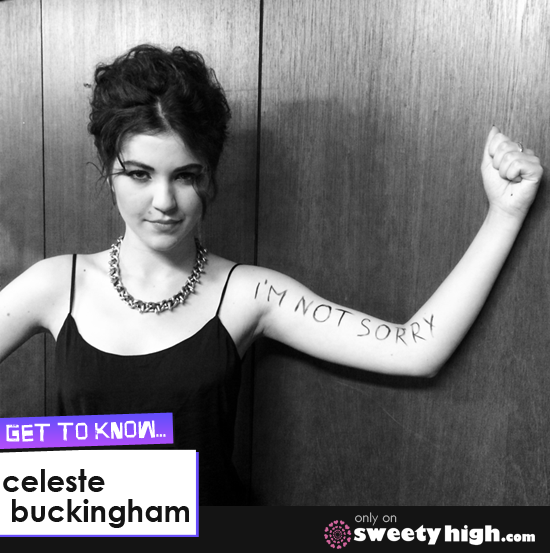 For today's celebration of International Women's Day, Celeste also wrote a song called "I'm Not Sorry," about how women should embrace their womanhood and never apologize for it. In a Q&A, Celeste spoke with us about her career and the new track!

1. How old were you when you first started making music? In the beginning did you ever think it was something you would pursue as a career?

I've been writing and singing songs since I was just four yearsold, but I was 12 when I actually wrote songs that were later produced. For example, I wrote "Blue Guitar" and "Nobody Knows" when I was 12 and recorded them when I was 15. They both became radio hits in Slovakia and Czech Republic, which was so exciting! I didn't think I would pursue music as my career, but I knew that I would at least make music and sing because I'm so passionate about it!

2. Who are some of your biggest musical influences?

I listen to all kinds of music from Jazz to Pop, to Blues to Rap. It just depends on if I like it. There is a long list of both older and newer artists who have influenced my music ranging from Frank Sinatra and Eta James to Amy Winehouse and Maroon5.

3. What is it like to be chosen to be the youngest-ever X Factor judge? Are you excited for the opportunity?

I'm SO excited! I also understand that is it huge responsibility. I know that I am young and not as experienced as the other judges, but I do have one advantage over the others: three years ago I was standing where those contestants are standing now. I totally understand their ambition, nervousness, and the stress they are experiencing. I really hope that I can be helpful to the contestants so they have a chance to share their music the way I did.

4. What motivated you to write the song "Nobody Knows" to benefit kids with autism? Is that a topic that has touched your life in any way?

I actually wrote this song when I was 12 about children and poverty. Later, I was approached by a foundation for children with autism to write a song for them. I looked at some songs that I had previously written, picked this one out and worked on it a little more. The song had the right spirit and feeling, and I feel it was destined for this cause. I love children and think that every child should be loved and happy!

5. What was the inspiration behind the song "I'm Not Sorry"?

I have been fortunate enough to have the opportunity to study, learn, and enjoy my life. Through school projects and helping my mother work with non-profit organizations, I became aware that not everyone is as fortunate or has these opportunities and freedoms. When I was 12, I remember watching a particular news story about the extreme mistreatment and of women in the Middle East who were wanting to read. That left a lasting impression on me, and I will never forget it. Women should be praised for wanting to learn! That being said, since I am free and able, I want to lend my voice to those who can't.

6. What made you decide to release the song on International Women's Day?

While working on my album, "Where I Belong", I planned the release of this song and video especially for International Women's Day! I wanted to draw attention to the cause, so that others will be inspired to learn more about International Women's Day. I was also hoping that women's organizations and foundations would use this song and video to enrich their actives and programs for this day.

7. Why are Women's Rights an important issue that everyone should get behind? What does girl power mean to you?

Girls are the mothers of the future! Their education, health, success, and confidence are all keys to the future generations. Women are half the population, so how can humanity hope to survive if half of it's population are not able to work to their full potential? One of my favorite quotes is, "The bird of humanity has two wings, one man and one woman, and that bird cannot fly unless both wings are equally used!"

I just want to say a big thank you to my fans for all their support! I love you and can't wait for you to see the video for "I'm Not Sorry"!

Listen to Celeste Buckingham's hit single "Run Run Run" below, and to learn more, be sure to follow Celeste on her social pages! You can also become a part of our sweet community at SweetyHigh.com!