Chicken Wiggle is a light and simple but deeply satisfying platformer for the Nintendo 3DS—and it doesn't hurt that its protagonists are so adorable. 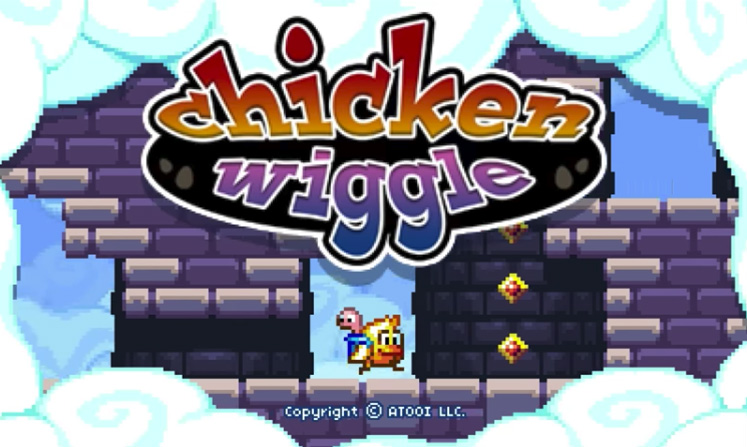 You play the game as a cute yellow chick whose fellow fowl are kidnapped by a witch. Shortly afterward, you meet a worm who's willing to join you on your journey to save your imprisoned bird buddies. There isn't much more to the plot than that, but it doesn't really matter that Chicken Wiggle is light on story.

Only together can this chicken-worm duo traverse through eight towers consisting of six levels each to get to the witch. While the chicken can peck at enemies to defeat them, it's still a baby and has a limited jumping range.

That's where the worm in his backpack comes in. The sticky critter can jut out up, down, left or right to latch onto walls or obstacles, bringing the chick with him. This move is also great for stunning enemies, keeping them in place so the chick can deal a blow and knock them out completely. 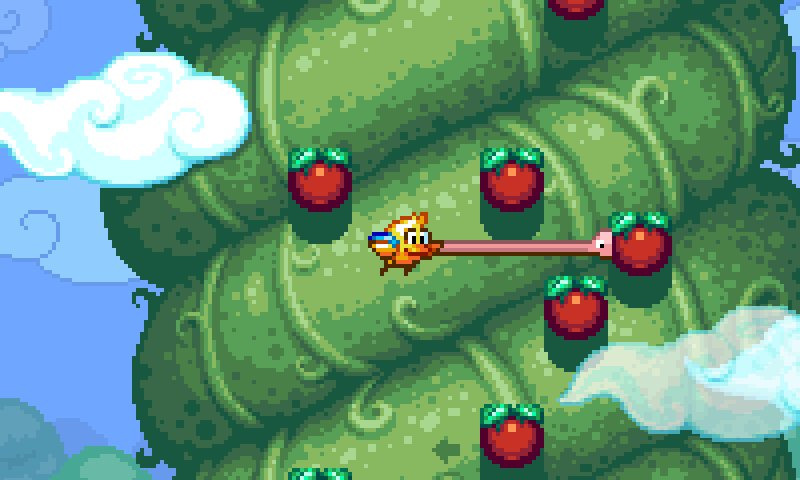 The levels use this stretching worm mechanic to their fullest, requiring players to really grasp this new style of gameplay before they progress very far. While these areas start off simple, they quickly progress into real challenges as spiky obstacles and trickier enemies are introduced. Each of the game's levels ends when you rescue another chick from its cage. Most of the levels are quick with satisfying platforming, making it tough not to play another level after every completion.

This game is also full of items to collect. While there's no in-game incentive to grab all 100 pieces of loot strewn across every level, they do serve as guiding bread crumbs to the end, and I didn't finish a single one of the 47 exploratory stages of the game without collecting every single piece.

Each level also has three collectible coins spelling out the word "FUN," which are tougher to locate. Again, the game doesn't explicitly reward you for getting them, but completionists will want to go back to every level to nab them all, giving the game further replayability. 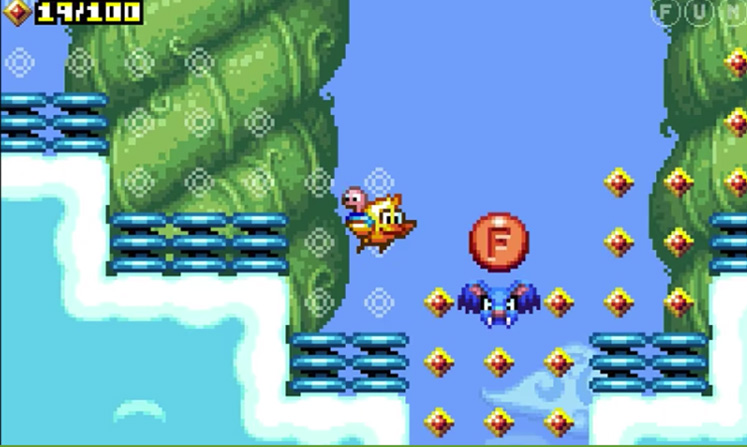 Certain enemies can make later levels particularly tough. The chick's peck must be timed carefully to catch baddies at just the right moment to defeat them, making it critical to stun bad guys when they're headed right at you. And I can't tell you how many times I aimed to stun an enemy with the worm, only to accidentally grab onto a wall or ceiling behind them instead, pulling me right into harm's way.

There were certain levels where I found myself dying a lot, but luckily this game doesn't give you a limited number of lives, so you're free to retry as often as you need to before making it to the next area. There are also checkpoints, so you don't always have to start from the very beginning of the level.

Even if you start getting frustrated with a tricky portion of the game, it's charming enough to keep you coming back. The character designs are simple but sweet, and even enemies like giant floating eyeballs and devilish imps are just cute enough not to be totally menacing. 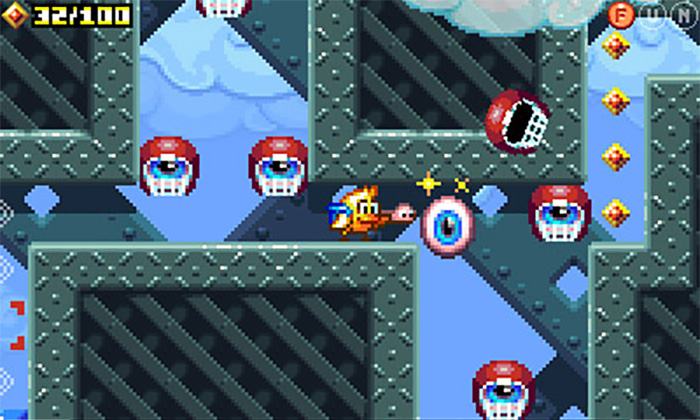 There are also various level themes, each with their own unique looks and great 16-bit music. My favorites are the ghost levels, which are typically full of untouchable specters, hidden floors and passages, and doors that can only be unlocked once you can locate carefully placed keys. 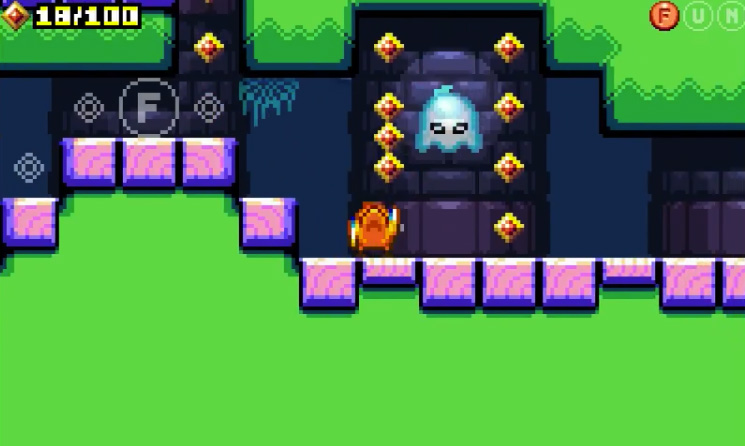 Certain levels in every tower also require you to use special power-ups to progress. A hero mask allows the chick to fly, while a demo hat gives him the power to peck even through tough walls. Speed shoes make him fast on his feet, while a jetpack gives his jumps a little extra boost. There's also an orb that turns the chick into a ghost capable of finally beating other ghosts and walking through otherwise deadly spikes. If you're like me and had to start over many a section because of spikes, it's a welcome power. 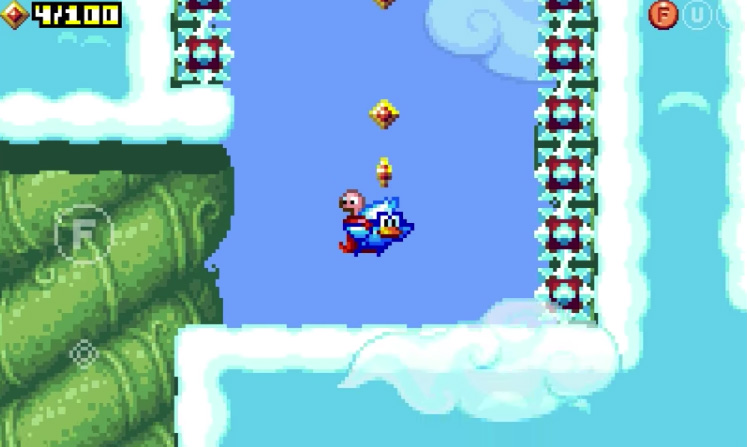 The game is a lot of fun, with great levels that always mix up the gameplay, but with six levels for each of eight worlds, the main game won't take more than a few hours to beat—even with an interesting final boss fight that forces you to really put the worm and pecking abilities to work.

That's why it's so great that the game has a built-in level customization tool. Within it, you can make your own Chicken Wiggle levels and share them so anyone with the game and internet access can play them.

And the level making tool has everything featured in the actual game. If you've played Super Mario Maker, you're familiar with the ease of dragging and dropping enemies, blocks and interactive items to craft your own levels. It's intuitive and fun to use, and it even has features that weren't showcased in the actual game, including warps that zip you around a level. 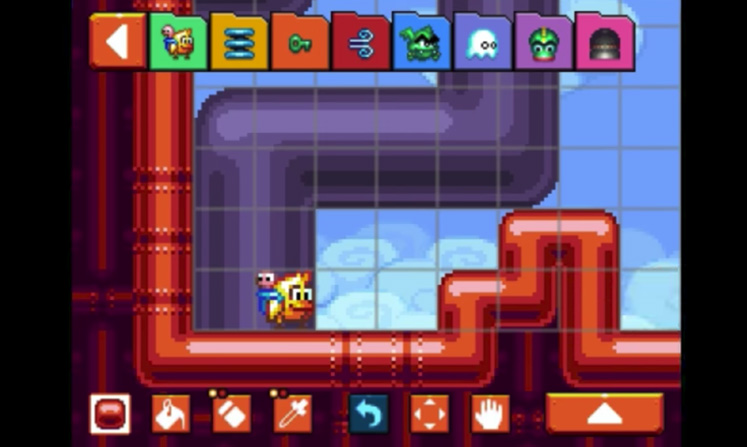 You can also create different play modes, where instead of freeing a chick at the end, your goal is to defeat all the stage's enemies, collect all of the level's loot or guide a skeleton enemy to its tombstone home. I find it odd that none of these were implemented in the main game, but they are utilized in some of the custom levels by the creators of the game.

My one gripe with the level creation tool is that if you want to test your stage, you have to do it from the beginning every time. If you're trying to finely tune a section at the end of your level, you'll have to play the entire level up to that point to test it after every edit. Buy maybe that's just my fault for saving the most complicated part of my level until the end.

While I've never really enjoyed making levels in Mario Maker, I really did enjoy making my own Chicken Wiggle level utilizing all of the game's powerups. If you'd ever want to play it, you can locate the level with  the ID 289.

Overall, Chicken Wiggle is a 2D platformer that doesn't just look and sound like a retro game—it feels like one too. Though its story is a bit shallow, the gameplay is compelling enough to keep you busy for a while, and if you ever grow bored of the game's core levels, there will always be great fan-made levels to play.

Chicken Wiggle will be available starting tomorrow, Aug. 17, for $14.99 in the Nintendo 3DS eShop.

And if you're looking for more games to add to your 3DS collection, click HERE to find out why we recommend Miitopia.