China Anne McClain is a singer and actress best known for her role as Chyna Parks on the Disney Channel show A.N.T. Farm. Tonight is the show's final episode, and we spoke with the young star about the emotional finale! 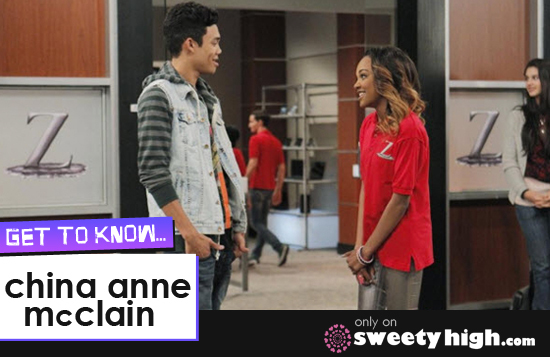 "It's definitely very sad for me because it was a show that I really enjoyed working on," China said. "I'll always remember it, no matter what I do or where my career takes me."

Though she's sad to see the show come to a close, she said she is proud of what she was able to achieve on the show.

"It's very sad, but at the same time, it was a good thing because I finished it and I accomplished what I wanted to accomplish when I was a little girl," she said. "It's bittersweet."

China said that the episode took an emotional tone never yet seen on the show.

"The main thing for me was really just the emotional aspect of the episode because an ANT is actually leaving the ANT farm," she said. "We didn't really get to do emotional scenes in the show, so it was really cool to be able to do that."

She said that when it came to filming those scenes, her tears were all real.

"I thought about it being the last episode and that really brought tears to my eyes," she said. "I really did just have to pull that out of myself and think of that the whole time."

"There''s a new Z-Store opening in New York, so we all go and I meet Roshon there," she said. "It was great working with him because he is just so hilarious and so funny, really great and really likable. It was awesome for him to be on the show and for me to work with him and see him."

She added that her best memories from the A.N.T. Farm set came with hanging out with the rest of the cast and crew.

"There were a lot of fun activities that we'd do onset," she said. "We did activities like playing basketball or going up to the ball pit, or just going out to lunch, or having lunch onset with them was really fun. Also we caused a lot of trouble onset, and that was really fun."

Her experience filming three seasons of the show also taught her a lot of valuable lessons that she plans to take with her.

Now that the show is over, China Anne McClain plans to devote most of her time to making music with her sisters Sierra and Lauryn.

"I do have a few other acting things lined up, but I'm focusing on the music right now," she said.

Recently they released the first single off their upcoming album, "He Loves Me," on iTunes.

You can also check out a sneak peek of their upcoming song on their Instagram here!

"We actually do have a new song coming out very very soon," she said. "I don't want to say too much, but this song is very very different than 'He Loves Me.'"

We absolutely can't wait to hear even more from China Anne McClain and her sisters! Check out China's social media pages below.

Also be sure to tune into the series finale of A.N.T. Farm tonight on Disney Channel at 8pm tonight, and if you're going to miss the series, be sure to become part of our community at SweetyHigh.com!