Ever since I was first introduced to the game and its ingenious time travel mechanics at E3 in 2019, I've been anxiously awaiting the release of an indie RPG called Cris Tales.

The game stars a young woman named Crisbell, who, with the help of a time-hopping frog named Matias, discovers her powers as a time mage, and the important role she's set to play in saving the earth in an upcoming conflict. She has the ability to glimpse into the past as well as the future, seeing (and changing) history as well as her destiny, and to use those powers within battle as well.

At last, the game released in July, and the team behind the game was kind enough to send me a review key on the Nintendo Switch to try out for myself. After playing it, I can honestly say that it's a must-play for RPG fans everywhere. Here's why.

The story of Cris Tales unfolds in a well-developed world separated into four main lands, with the areas seeing unique issues with class disparity, the aftermath of war, dealing with refugees, mysterious illnesses and more. As Cribell, you're eventually tasked with taking on the Empress and stopping her plot to destroy the world. That might sound like a lot to deal with, but the story is richly told, and with its bold and colorful presentation, it never feels like too much.

As you explore the towns, the screen is split into three, allowing Crisbell to glimpse into the past, present and future all at once. You'll be able to send the time-traveling frog Matias into the past or future to collect items, eavesdrop on conversations or otherwise mess with time to progress. 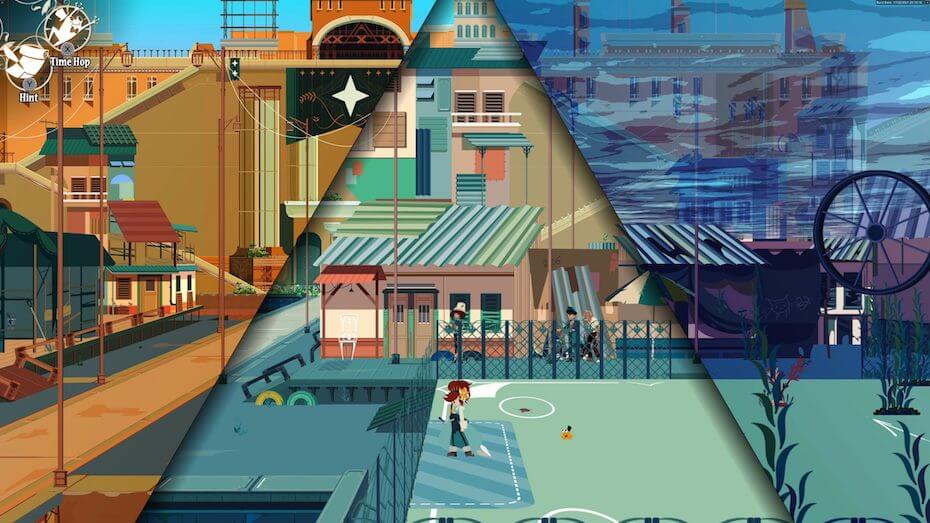 That also means that you get to see how your actions have a butterfly effect in the world, and the choices you make have implications you can see by peeking into the future. When you have a finite resource and can only save one person's home, who will you choose? There are also other choices to be made, though how thorough you are with the sidequests will decide how many options you're given—and what ending you'll receive at the end of the game. I recommend being a completionist and making sure you take on everything you can before you decide to move forward in each chapter. The decisions you make can literally be life or death for certain characters, so make them wisely!

The game's also packed with memorable characters you'll grow to adore. Some of those who seem kind of heart may not actually have the best intentions, while some villainous characters may be more morally grey than they first appeared—evil from your perspective, perhaps, but with generous and altruistic motives in other respects. And they're all brought to life with fully voice-acting dialogue for every spoken line. 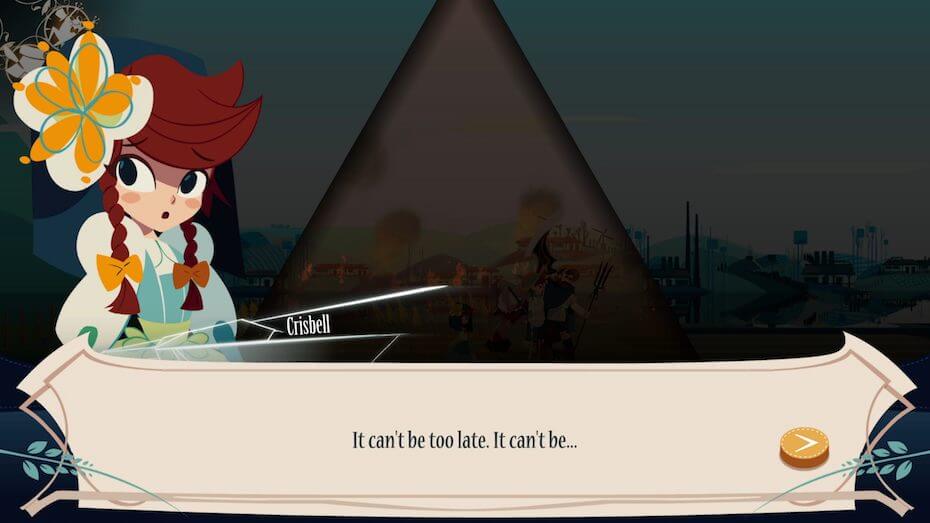 In fact, every aspect of the presentation is spectacular, with the gorgeous, colorful and meticulously crafted lands to the character designs and a swelling, stunning score by Tyson Wernli (also known as com_poser in the Mario Maker and Super Mario World communities). It's also a love letter to JRPGs, and as I played, I couldn't help but notice the multitude of references to the Final Fantasy series. It all drew me in one element at a time, though as the story unfolded, I started feeling a twinge of doubt about the narrative I was being served. Something seemed amiss, and I felt like some plot twists were coming—and I could not have been more right.

As an RPG, battling is a big part of Cris Tales, and the developers get the combat just right—so long as you're okay with random encounters. They pop up frequently, and besides boss battles and battles triggered by story elements, they're the bread and butter of this game's fighting system. You can run away if you're leveled up enough, but if not, prepare for trouble.

The most important thing to understand in the game's turn-based battles is the attack order, which is displayed at the top of the screen. Knowing who's going when is critical to success, and can also be manipulated with speed buffs and debuffs, as well as Crisbell's time powers, to maximize your attack potential and minimize the number of times the enemy can get hits in.

They are six party members in total to try out during the course of the game, with time mage Crisbell being the constant. Your introduction to your first two companions, the element-wielding Christopher and plant magic-user Willhelm will show you a lot of what you need to succeed in the game, and how to use Crisbell's power to your full advantage. 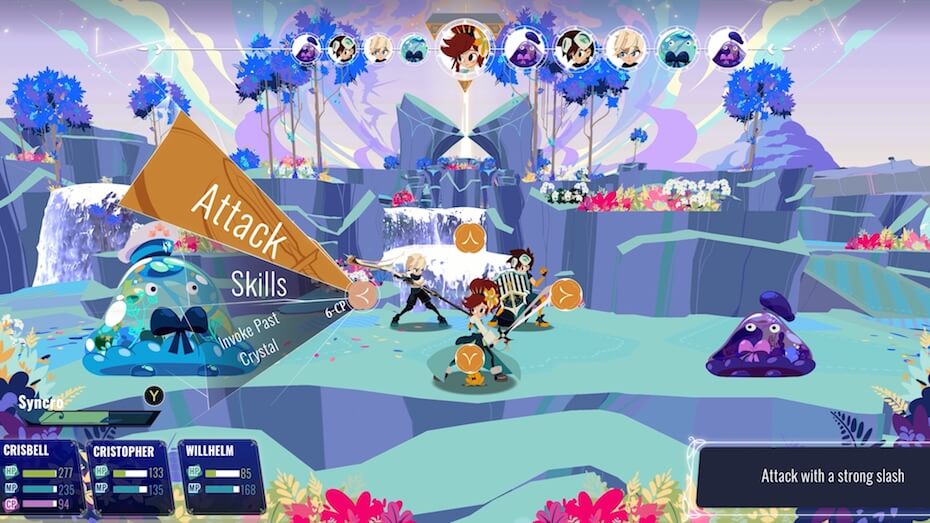 Maybe you want to soak someone with a water attack and then push them into the future, where their armor will be weakened by rust, or plant a poison seed in the present and send them to the future so the poisonous plant bursts in their faces the second they arrive. Perhaps you want to send an enemy into the past and take on their younger, less powerful form instead. There's so much to play with and explore with these mechanics—and on the off chance that you do game over, there's a valid in-game reason as to why you can continue—time travel!

The game also teaches some valuable lessons along the way. Over time, I really came to rely on two main characters in my party, because I enjoyed their move sets and the way they worked in tandem with Crisbell the best. I won't say too much, but both of those characters were taken away from me momentarily for plot-related reasons, and I can say that their absence was dearly missed—not just because I needed their unique in-battle skillsets, but because I came to really enjoy them as characters (though their usefulness probably made me start to adore them even more.) It also didn't help that for the first, I'd just spent all of my Marbles (the in-game currency) fully upgrading them and equipping them with pricey accessories. While I felt frustrated at first, I did appreciate that this forced me to try other characters on for size and discover their unique abilities, which came in handy in the endgame when I needed every tool possible at my disposal.

As with any RPG, leveling up is essential if you want to get powerful enough to win, but getting to higher levels through experience isn't the only way to get stronger. Time Synthesis upgrades are available at in-town shops, and while they're pricey, they permanently upgrade your weapons' abilities. You can also add status effect charms to your physical weapons, and equip accessories like rings, necklaces, bracelets and shoes for different status effects.

Leveling up is critical, however—especially because that's how you gain new abilities. Plus, you'll only collect experience for characters in battle, so you have to fight using each character if you want them to reach their maximum potential. That's especially useful because some magic, like healing and curing, can conveniently be used outside of battle. However, unlike many other modern RPGs, leveling up does not restore your health, mana or CP (which aids Crisbell's time powers) so, besides story events that heal you, you'll need to rest at an inn or use a tent item to regain them all. Since tents are pricey (at least in the beginning, before you've racked up tons of Marbles), I definitely recommend opting to heal at inns when you can.

I, personally, didn't find it to be a game where I needed to grind a lot to level up appropriately to keep up with the bosses, though there was one situation where one healing spell would have been super handy if I'd just acquired it earlier on. If you're willing to spend more time fighting and collecting experience, those spells will make your life a lot easier. 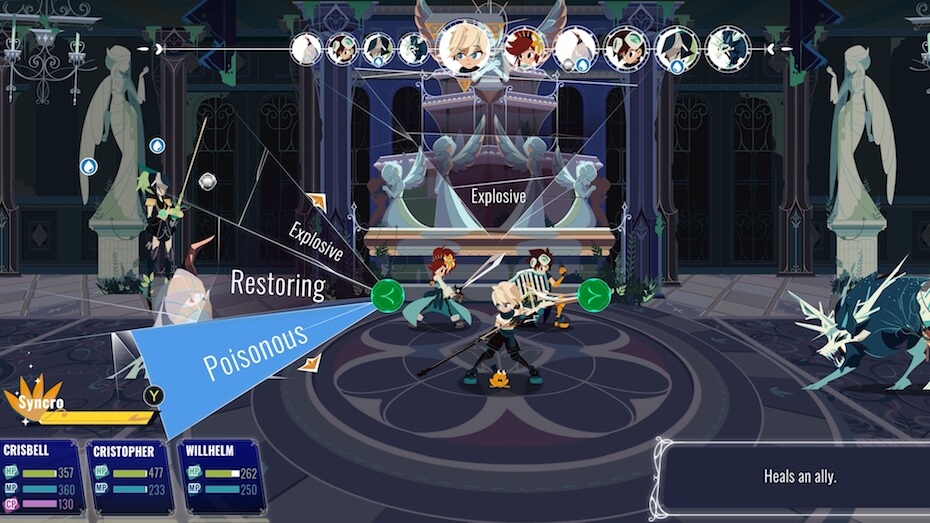 And you'll want to be strong, because some of the boss fights in this game are a doozy, with drawn-out battles that require a full understanding of which abilities work together best, knowing your party in and out and grasping everything in Crisbell's time-manipulating bag of tricks. The final fight, in particular, is a real pain, but finally winning makes the trouble completely worth it.

Cris Tales is everything I could have wanted from an RPG, with a brilliant story, stunning visuals and a battle system that was fun and kept me coming back for more. I wanted to do everything the game had to offer, not just for the sake of being a completionist, but because it was satisfying to see the story unfold and I wanted to see how the game rewarded me at each step. Its time mechanics also set it apart from anything else I've played. It's an ambitious and expertly executed game, especially from an indie studio.

However, there are a couple of things that weren't my favorite, which might just be byproducts of the game being inspired by the retro classics. For example, there's the fact that you can only save at designated points. Mostly, this just means there's quite a bit of backtracking, but at one point I actually defeated a tough boss and escaped by the skin of my teeth, only to take two steps and get defeated by low-level enemies at the next random encounter. And while the game is far from punishing, it would be nice if there were difficulty options for those who want to see the story but have a tough time with the battles—or even those seeking an extra challenge.

And then I have a couple of small grips that might be Nintendo Switch-specific. Firstly, taking screenshots and movie clips is blocked for the entirely of the game, which is a bit of a shame, because I was constantly encountering moments that felt worthy of remembering and sharing. Secondly, I actually don't have a specific idea of how long it took me to beat the game, as the in-game timer seems to run even when the device is in rest mode, and by the time I'd beaten it, it'd run past the 99:59 mark and reset itself. And lastly, some of load times in this game can be long, which is more than slightly obnoxious in a game with frequent random encounters.

Still, none of these things were enough to dull the shine of this captivating and delightful gem of a game. Even toward the end of the adventure, when some of the quests began to feel a little bit drawn out and fetch quest-y, the game more than made up for it in the story developments in between. I had to keep going to find out the truth, and I was so glad that I did. 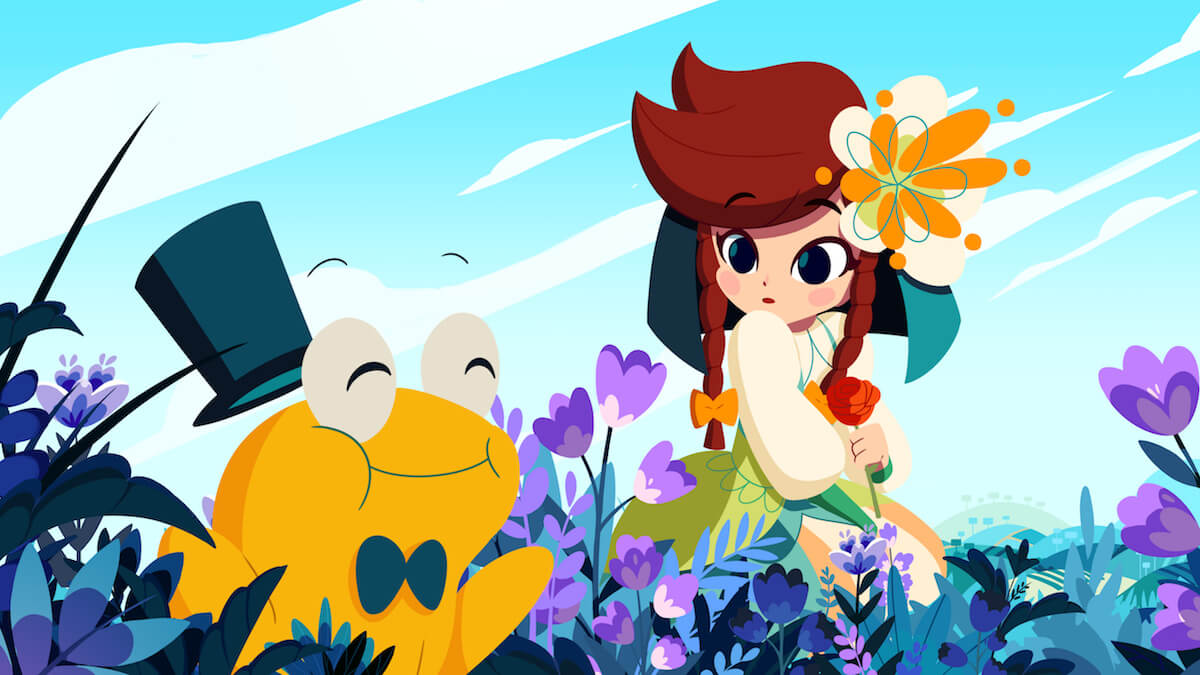 Not sure what else to add to your Switch library? Click HERE for all the reasons we're obsessed with Mario Golf: Super Rush on the Switch.