Christina Cimorelli: What Girl Power Means To Me

Girl power means being able to feel free to be who you actually are, rather than having to shape and mold yourself to something else that you think people want you to be. It means getting in touch with your real, true self and expressing that to the world. 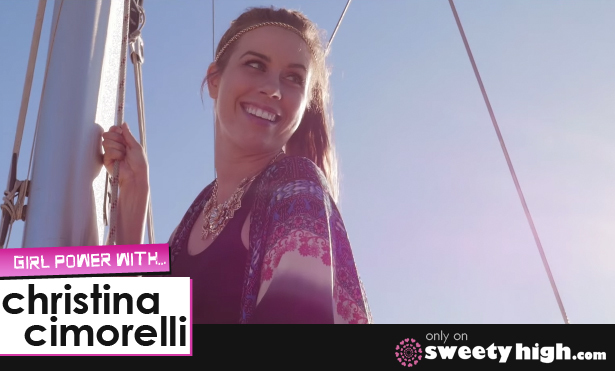 Girl power is about being brave enough to put that out there, and being able to be assertive, which is not aggressive, not passive, just assertive, and actually stand up for yourself. Let your "yes" mean "yes," let your "no" mean "no."

Be brave enough to be who you really are and be upfront with your intentions. Speak your mind, because I think a lot of girls are scared to put themselves out there and be who they really are. Sometimes they try to stay back and not cause trouble or not get people mad at them.

I would like to know why that happens. From my own experience, when you do put yourself out there, you get backlash. People get mad at you for saying what you really think and being who you really are, because they're mad that they feel like they don't have the courage to say what they really think or be who they really are.

I think that just happens because people are scared. When you're a kid, it's not like that. You express yourself. When you're angry, you can say, "I'm mad at you." You say, "I want to wear this today."

But then when you get a little older you get scared what other people will think and you start molding yourself to fit what you think is normal, and how you think you should fit in with everyone. I think it's because people are scared and you let other people's fears get to them and put them down.

I think a lot of people go throughout their lives without hearing many positive things from others, especially from their own families. They can put out a lot of negative things, so you have to be there for yourself and tell yourself you can do it. You can be this. Don't worry about what they said. No, you're not really that negative thing, you're this positive thing.

This year I made a goal to be more confrontational and more blunt with people and to really say what's on my mind, and act in the appropriate way but really not hold back. It's only been a couple of months so far in the year but I've pretty much gotten to where I wanted to be by the end of the year, which is really exciting.

Basically, you make a goal to be whatever you want to be, whether it's to get in touch with your true self, to speak your mind more, to say what you really feel. Then, be your number one supporter. Give yourself positive affirmation, even if there's no one else to do it.

Tell yourself "No, we can do this," (I always call myself we, I don't know why. I think there are two or more of me.). I always say, "We can do this, it's ok, it's going to be fine." And if someone says something negative, I replace it with some positive thoughts.

All I did was create that goal, and then actually take action, which was the scary part. Then I saw what happened. I've learned that when you say what you're really thinking and stand up to people and you are brave, then nothing bad actually happens. The world doesn't end like you think.

Some people do try to put you down, or put you back in your place, but when you're confident and strong about it they generally respect you. You can't be scared about speaking your mind.

Christina Cimorelli is a member of Cimorelli, a group of six singing sisters that has achieved recognition across the world thanks to their powerful voices and gorgeous harmonies. Christina is the oldest sister, and one of the group's primary songwriters. She also writes harmonies with Lisa!