In addition to winning Academy and BAFTA Awards, she's also the founder of the prestigious Christine Blundell Make-up Academy for Film & Television, and her recent credits include the highly anticipated Wonder Woman movie.

What does it take to design the looks for one of DC's most beloved superhero characters? We spoke with Christine to discover the intricacies of makeup design and how she brought the classic character to life in her big screen debut. 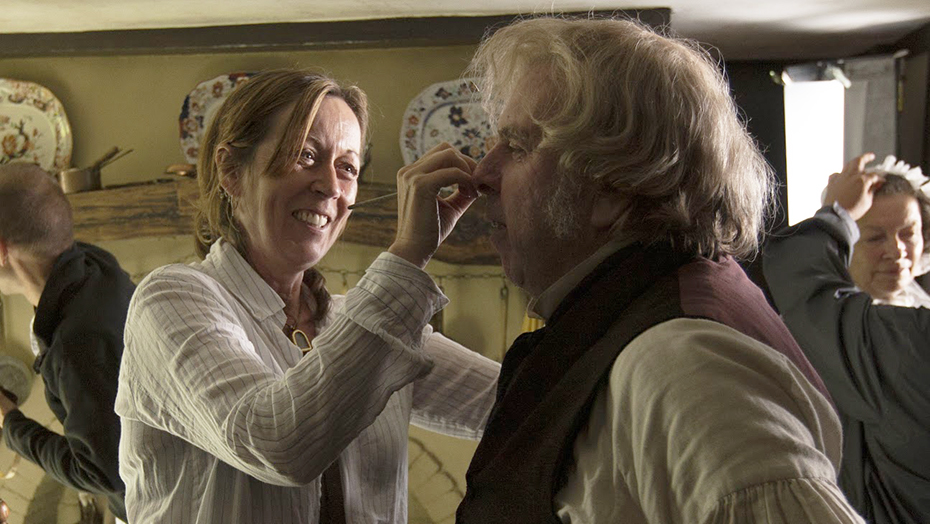 (Courtesy of the Christine Make-up Academy)

Sweety High: How did you become a makeup designer?

Christine Blundell: I was a hairdresser initially, doing hair for local bands. I ran my own hair dressing salon for a few years before I sold it and invested money into a makeup course. From there I started doing hair and makeup for theater before I transitioned from theater to TV and then TV to film.

SH: What does the role of a makeup designer entail?

CB: As a makeup designer, my job is to set the look for every single actor in the film. It's also my job to bring together the team to make this possible. Here in the UK, the designer does hair and makeup, while in America you'd typically do either-or.

In my line of work, I'm not necessarily on set all day because I'm setting up the looks for the next wave of actors who are coming in. On Wonder Woman, for example, I had to work off the fact that it's a period piece set in the war. They wanted to have some prosthetics and include glamorous hairstyles as well as wartime ones. My job is always to work alongside the costume and set designers, as well as with the director and studio, to sort out all the looks and make sure they're executed. Once the style is established, I'll allocate somebody to work on that character on a day-to-day basis while I move on to the next section of the film. As a makeup artist, that person's job is to carry out the look that I've thought up.

I think people generally misconceive what movie makeup is all about. Even some of my family members aren't entirely clear on what I really do. As soon as you say you're a makeup designer in film, people immediately think you do beauty makeup. That's actually very low on the list of things you have to do on a day-to-day shoot. Nine times out of 10 you're making people look muddy and dirty and like they haven't slept for a week. You're helping the actor look grief-stricken or tired or like they've just been in a fight to help tell the story. When it comes to beauty in films, you actually don't want the work to stand out. I have to suck up the fact that people think I just do beauty.

SH: How did you get involved in Wonder Woman?

CB: Booking a film is mostly about building up a reputation and word of mouth. I'd worked with the Wonder Woman costume designer, Lindy Hemming, for many years—we both won an Oscar together for Topsy-Turvy. I met the director, Patty Jenkins, when I was filming Arthur: Legend of the Sword, and she was a big fan of my work. We got along well because she's very visual and had a clear vision of how she wanted everything to be done. I, very luckily, was offered the job.

SH: What was the process of designing the looks for the film?

CB: Once I finished Arthur I went straight into prep for Wonder Woman. We usually get a couple of months before the filming starts to pull together the wigs and plan for the doubles and stunt people for all of the actors. I worked alongside Lindy on her designs for the Amazonians. Once we'd put together a look, we'd show Patty and tweak it based on her feedback until we came across the final look for the Amazon warriors.

When they're all on their island, the Amazonian warriors look like strong, powerful women. That's why I decided to create the mohawks and keep everyone's hair in a tight plait. They're meant to be like gladiators in training, and should look like they haven't really got makeup on. But when Diana comes into England, there's this massive shift from her beautiful, colorful island where everything is idyllic to this grey, war-torn land where everyone looks a bit defeated and ashen.

When Diana arrives, she's just come out of her training plait and her hair is down, and we designed her hairstyle to be her idea of what the women around her are wearing, which is obviously nothing like the actual styles of the time. She's meant to look like she's out of place. We want her to look like a strong woman who's here to rescue people, not to blend in.

SH: What motivated you to start your own makeup school for film and TV?

CB: I'd been talking about setting up a makeup school for a long time because I felt the training in other schools wasn't covering the skills I needed my trainees to have. The schools that were open around London at the time were doing monster makeup and stuff you rarely, if ever, actually need on a film set. I wanted my trainees to know about how to make people look dirty and down, and what they'd be expected to do as a trainee. Nobody was being taught how to look at scripts. Nobody was being given work experience.

I knew that if I had my own school, I could instigate that. After they'd finished the course, I would give them experience on sets, so they'd get real experience and know what they were getting into. I wanted to dispel the myths that students could take a few courses and come out as designers at the end of it. I'm very adamant and clear about the fact that when they come out of the school, they're still a trainee, and they'll continue to be for a couple of years as they work their way up within the industry. I felt the training needed a little kick, so I opened up the school once I finished working on Casino Royale.

Can't wait to check out Wonder Woman in theaters on June 2? In the meantime, click HERE to see which female superhero you are based on your zodiac sign.