If you're a Marvel fanatic, you've seen the work of screenwriting duo Christopher Markus and Stephen McFeely.

The two collaborated on the scripts for Captain America, Thor: The Dark World, Captain America: The Winter Soldier, Captain America: Civil War, Avengers: Infinity War and Avengers: Endgame, making them bona fide MCU royalty, and their panel in San Diego Comic-Con's Hall H last week was all about celebrating their work with Marvel.

Throughout the panel, they revealed some little-known secrets about the films and how they were made. Here were our favorite revelations—but if you aren't caught up on all of the MCU movies up to Avengers: Endgame, stop reading now unless you want to see some major spoilers.

In Avengers: Endgame, the Avengers realize they can use time travel to go to the past and temporarily steal each Infinity Stone from its former place in time. Unfortunately, they only have enough time travel-enabling Pym Particles for a limited number of trips. Eventually, the Avengers realize they only need to travel to three places in three times to make it work. For the writers, picking them out was a tricky process that required some whiteboarding to nail down. The panel showcased a photo of this whiteboard on Hall H's massive screens. 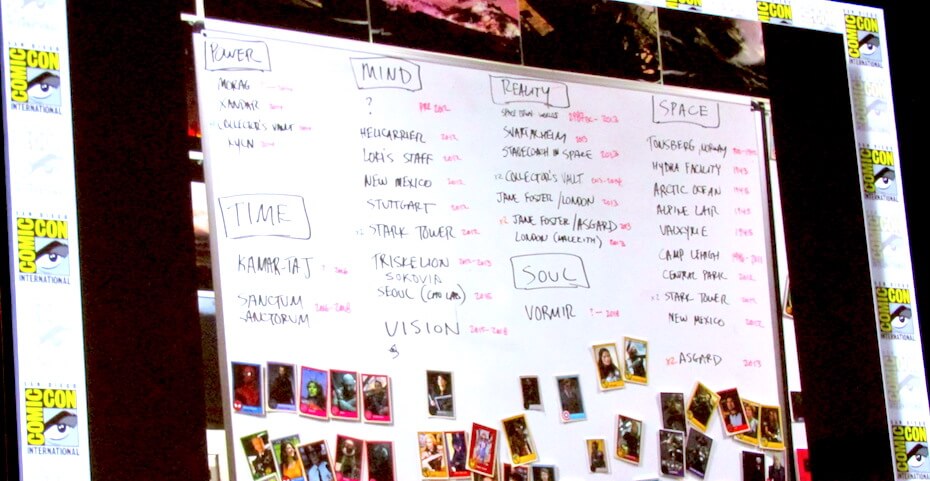 "This is in between drafts one and two," Stephen explained, "In our first drafts, they didn't go to all the same places. Specifically, they moved around a lot. They didn't go to the Avengers movie in that first draft. Then Joe Russo said, 'Why don't they go to the Avengers movie?' So this is a list of everywhere we could think that they had been in the movies, and we were trying to figure out where we could go. So we eventually just picked some places."

"And those are the legendary baseball cards," Christoper added. "Every single available Marvel character. And it really does start like this. Throw it on the board—is there a story there? We can go Kamar-Taj, Stark Tower, Stan Lee and give me a side of fries."

Of the six Infinity Stones, the Soul Stone is the most difficult and painful to retrieve. The only way to collect it is by sacrificing the life of someone you love on the far off planet called Vormir. Thanos does this willingly, throwing his adopted daughter Gamora off of Vormir's highest cliff, and though his "love" is empty and shallow, he succeeds.

When Natasha and Clint arrive there in Endgame, they're both willing to commit an act of self-sacrifice, with Natasha eventually losing her life to save the universe. But according to the writers, it wasn't always going to be Clint who survived.

"That's the second or third iteration of that," Stephen said. "A lot of that choreography was explaining a warranted way to do this. They're both fighting to be the hero. It's not a negotiation."

"You never want one of them to go, 'Okay, you die,' " Christopher explained. "They both have to be the one who wants to do it."

"And they both feel that they are the ones to do it for a number of reasons," Stephen said. "He, because he doesn't deserve to keep going, and she, because the only thing that she's been working for all of her life, and certainly the last five years, is getting to this one place so that she can get everyone back." 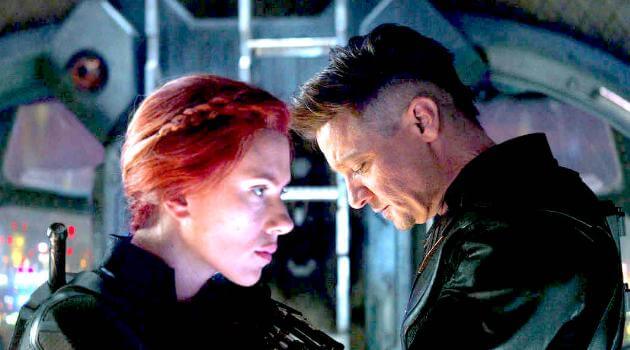 With an unlimited number of places and times to visit, and hundreds of Marvel characters at their disposal, crafting Avengers: Infinity War as well as Endgame must have been a massive undertaking for its writers. In order to get to the right choices, they had to list out all of the choices first. As decisions were tentatively made, the duo turned again to their trusty whiteboard.

"We wrote a big document that was everything you can possibly do in these movies, even contradictory ideas," Christopher said. "In there is that the Red Skull is clearly alive and has been sucked either into or across space by one of the Infinity Stones. He's awesome, so let's find a way to tie this whole thing together."

Originally, Thanos's reintroduction in Endgame also had a much darker tone.

"We were working on different ways on bringing Thanos into the present day, because we'd killed present-day Thanos," Christopher continued. "We'd activated the past Thanos. In one, Thanos had no idea it would take his Nebula some time to rejigger the time machine to bring him back, and so he went down to his present-day earth, which would be 2014, and wiped it out and killed the Avengers. And then, when you turned on the time machine, he would walk through with the Avenger he had killed and go, 'I killed you, again. What are you gonna do about it?' " 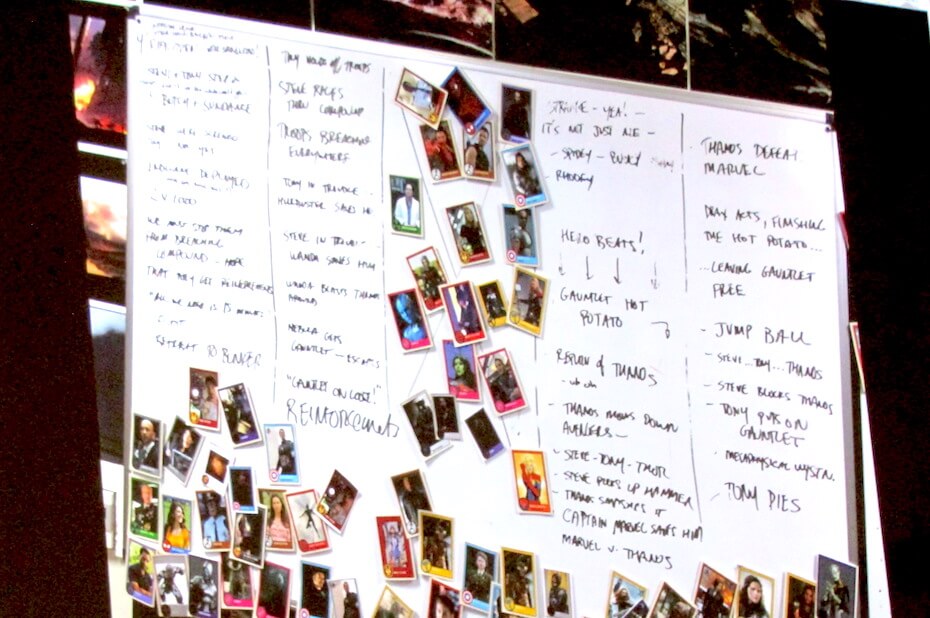 We're glad that's not how things worked out, even if not everyone made it out alive. And if your eyes are being drawn to the bottom right-hand corner of the image, you aren't the only one.

"You're misreading it," Christopher said in Hall H. "It says 'Tony pies.'"

After more than a decade of playing Tony Stark, Robert Downey Jr. ended his Marvel career in Endgame when Tony sacrificed himself for the safety of the universe. When it came to Robert's goodbye, the writers eventually trusted the actor's intuition.

"These actors have spent a lot of time as these characters," Stephen said. "Chris and I were very happy to, and did, write all sorts of lovely dying works for Tony Stark. Robert was not happy to say them. Robert knew this instinctively. A guy who talked, and talked, and talked for many movies, when he doesn't talk, you are crushed. He knew that, and we didn't feel we could turn the page where he doesn't talk. So he said, 'Guys, listen, I want to do much less,' and he was right." 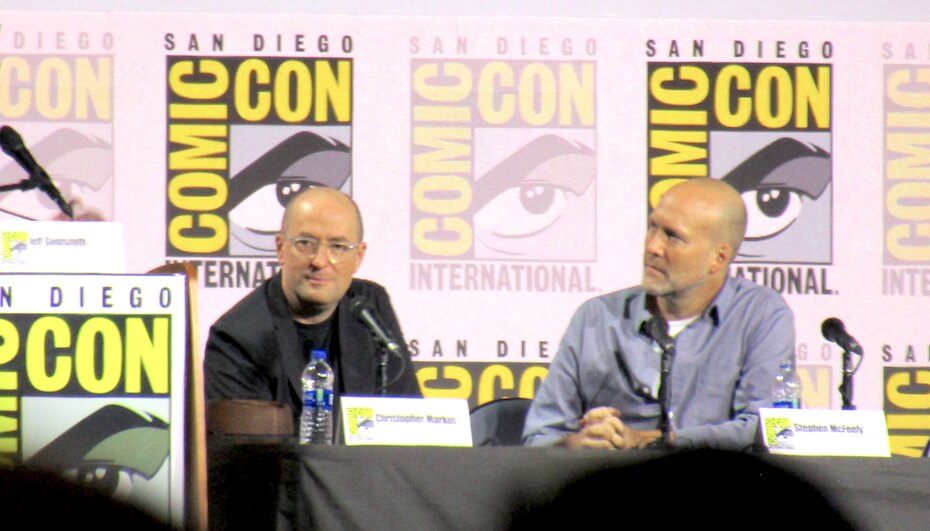 Want to know what's next in the MCU? Click HERE for a recap of every massive Marvel announcement you missed at San Diego Comic-Con 2019.