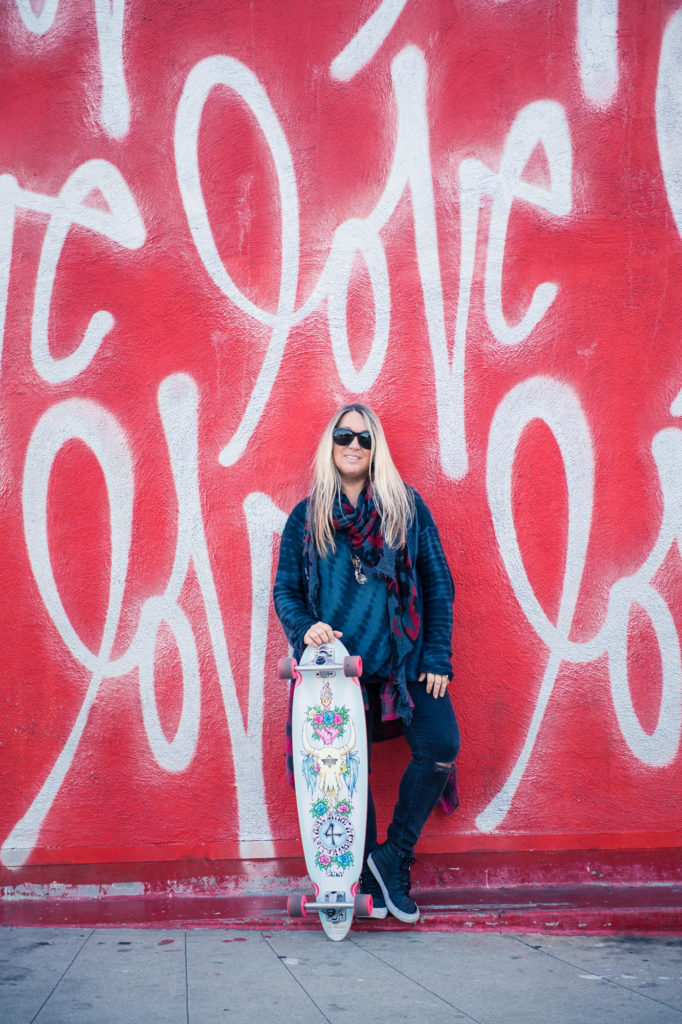 Although Cindy ended her professional skating career at the age 0f 22, she's still very much involved in the female skating community.

Now, Cindy is known for being the world's leading sports stylist, having her own empowering brand (Girl is NOT a 4 Letter Word) and authoring the book It's Not About Pretty: A Book About Radical Skater Girls.

Scroll below to hear Cindy's incredible story and learn how she's paving the way to success for fellow female skateboarders.

Sweety High: When did you first fall in love with skateboarding?

Cindy Whitehead: The first time I jumped on a skateboard, I was probably about eight years old. I didn't really come back to the sport until I was about 14, and that's when I completely fell in love with it. 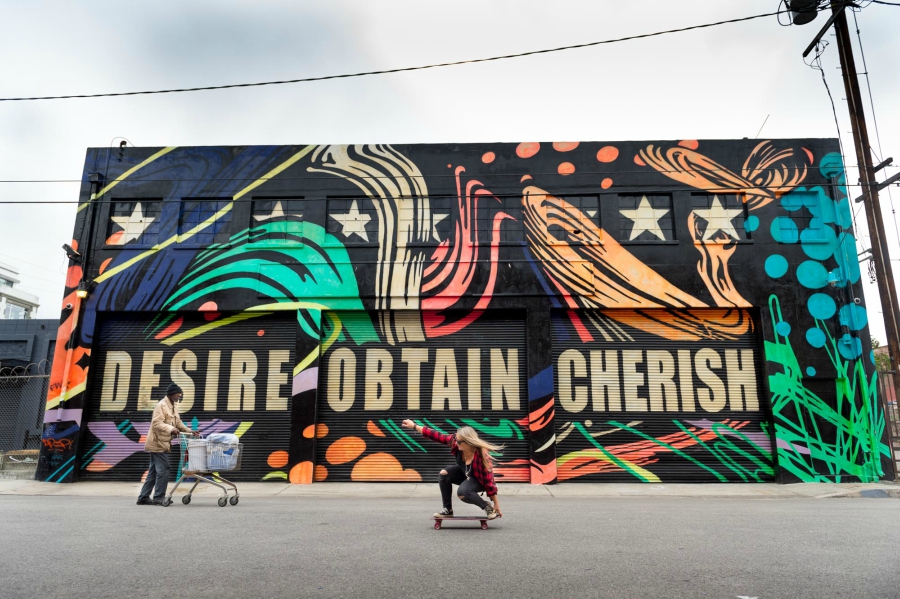 SH: How did you first get involved in competitions? And when did your skateboarding career really take off?

CW: I first started competing when a place in Torrance [California] called Skateboard World opened up. That was the first skatepark that I really hung out at and I rode for their team. That's also how I started competing in local competitions.

I think the biggest competition in the beginning, when I was amateur, was a Hang Ten Skateboard Olympics at Magic Mountain. I remember going to that freestyle contest and having so much fun riding all the rides. So much fun, in fact, that I almost missed my heat. They were calling my name over a loudspeaker and I was on some ride.

At this competition there were 29 girls from skateparks all over California. I placed third, missing second by a like a quarter of a point!

I remember thinking, "This is pretty cool. I'm on a podium. I like this and this is fun." I was nerve-racked putting together a routine to music, but I liked it.

After I did that with the freestyle, I still did freestyle in demos all over Southern California, but I really moved into halfpipe and ramp. That was my thing and I never looked back. 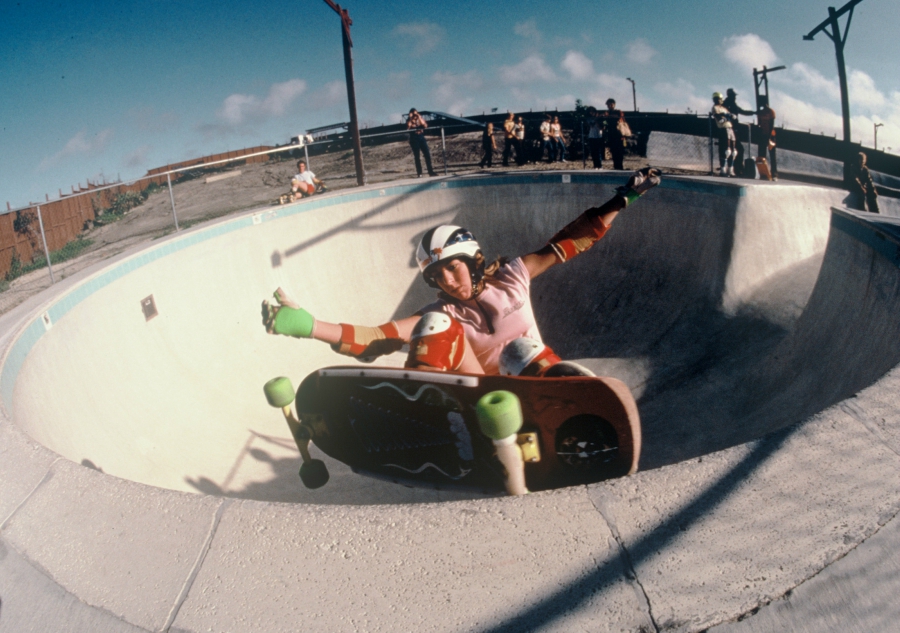 SH: How did you come up with the concept of your brand Girl is NOT a 4 Letter World?

CW: I turned pro when I was about 16, and when I was a pro skater, I noticed a couple things.

There really weren't brands for women out there to wear. We kind of adapted the guy's stuff to us and made it our own. I've always been into fashion and later on I became a fashion stylist for athletes working for Nike, Adidas and Gatorade. I've always had a love for fashion and sports, even when it was not popular to mix the two.

So after I was done skateboarding and had been styling for quite a bit of time, I started thinking, "How do we start a movement to promote skater girls?"

My thought was that as women, we need to be inclusive rather than exclusive. We should include everybody. So, we started a movement and we started thinking about how we could give back to girls in skateboarding, too.

Dwindle—which is a very male-dominated skate company with 14 brands underneath it—started talking to me, and we decided to do a collab skateboard aimed at the female market. 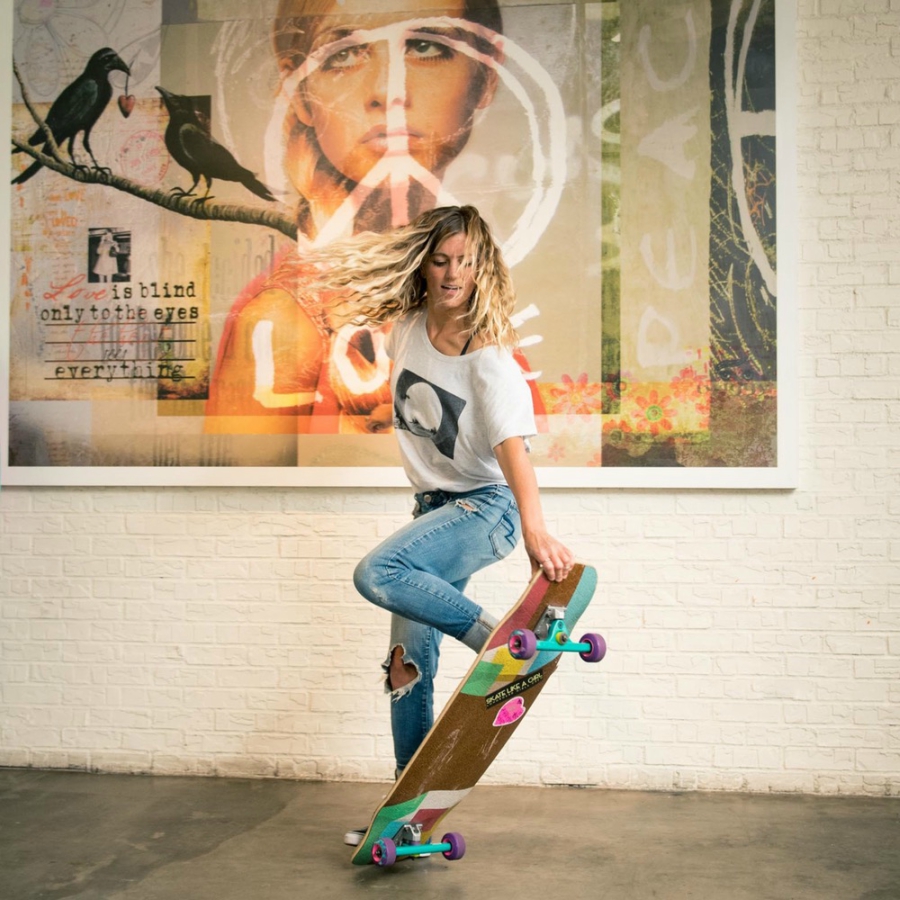 We also decided with that board to give back to 501(c)(3) non-profits in skateboarding, and only those that were giving back to girls in action sports.

We're now on our fifth non-profit, and we're on our seventh skateboard, and every year the non-profit changes who we give to.

SH: How did you decide to start the Girl is NOT a 4 Letter Word clothing line?

CW: People kept asking for apparel and I was like, "Oh, yeah, I forgot about apparel! I should be doing something about that… that's kind of my thing."

So I started just doing really cool, catchy phrases on clothing and also vintage photos of myself on T-shirts. It really took off.

That's when I really decided that every component of Girl is NOT a 4 Letter Word needed to give back in some way, shape or form. With the apparel line, instead of the money made going to a non-profit which we already do, that money is used for any sort of funding for girl skateboarders. 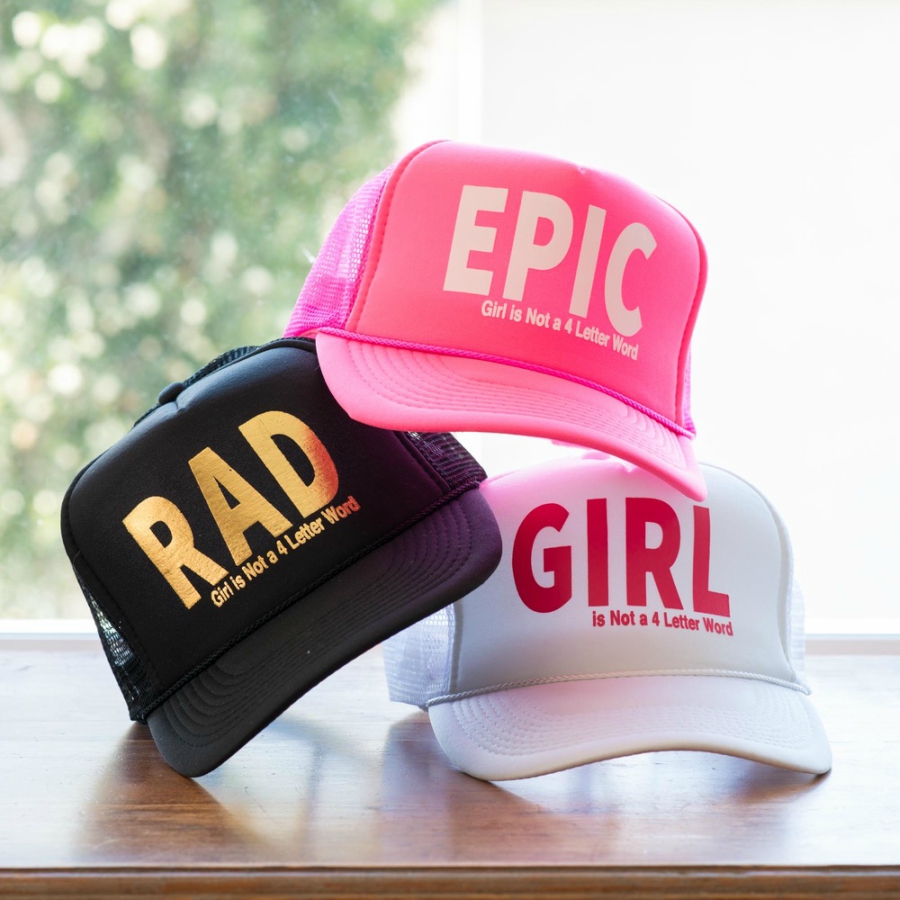 SH: You coined the term "sport stylist"—how did did you come up with this concept?

CW: Seventeen years ago, it definitely wasn't a thing. Nike was out there, but they were doing basketball ads—you didn't see Nike doing ads with strong athletic women. It was only starting to just happen.

I met a photographer who was doing just that, concentrating on strong athletic women, and that segment of the market. My husband actually introduced me to him and said, "Oh my gosh you guys need to talk. She's a stylist and she's well-versed in sports. You guys would be perfect!" 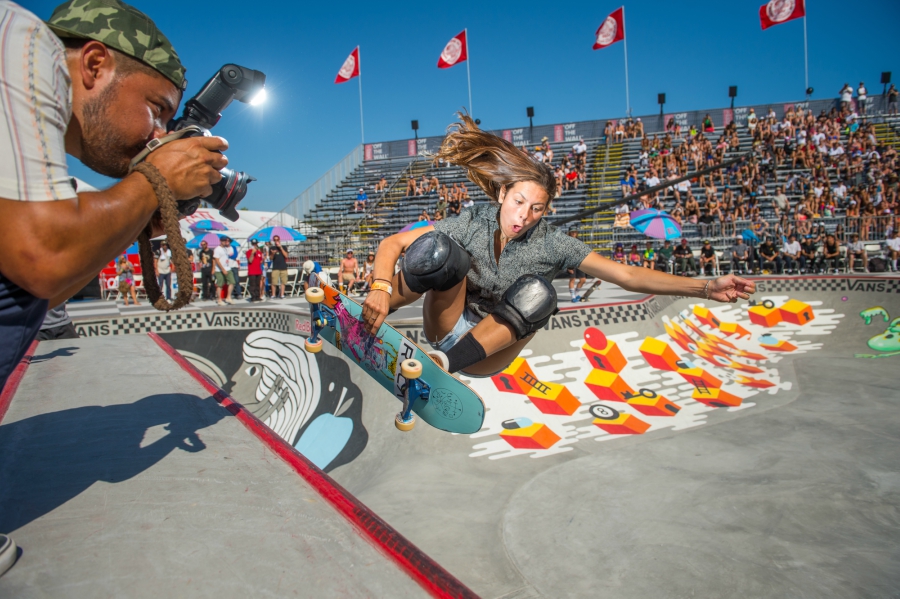 Back then, to coin and trademark the term "sports stylists" was not that difficult. Now, it's funny because I see people reference it. People will call me and say, "Oh, we can't afford to have you travel. Do you know somebody in Milwaukee who is a sports stylist?"

And I'm like, "Ha, That's actually a trademarked term, not a general reference." I like that people are using it now as an actual term. You know just like people use the word athleisure as a term rather than a brand.

SH: Do you have a favorite athlete who you've styled?

CW: I would say Michelle Kwan, the Olympic ice skater who now works in Washington D.C., and is a Fulbright Scholar. She is amazing. I was with her for many years and I think her work ethic and the way she handles herself in the press and on the ice is just spectacular. True class.

Bethany Hamilton was also wonderful—she's the surfer who lost her arm. It was always a pleasure and so much fun working with Bethany. She is such a cool girl, and man, if there's anybody who could complain about life or what's happened it's her—and she never did. So that tells you a lot.

SH: Tell me about your new book It's Not About Pretty: A Book About Radical Skater Girls!

CW: It's 144 pages of all girls skateboarding! There are 65 girls featured in this book all the way from ages five, to a couple girls who are in their fifties who were once pro skaters. It's jam-packed with color, action, soul skating, portraits…. basically any type of skateboarding you can think of, it's in this book.

The reason that we did it was because most of the skateboard magazines don't cover girls too much, and there's never been a book done on female skateboarding. My husband, who shot the book, agreed that these girls work so hard, harder than anybody because they have a lot of obstacles against them. They deserve to have something really beautiful to sit on their bookshelf, to sit on their coffee table and to inspire them. 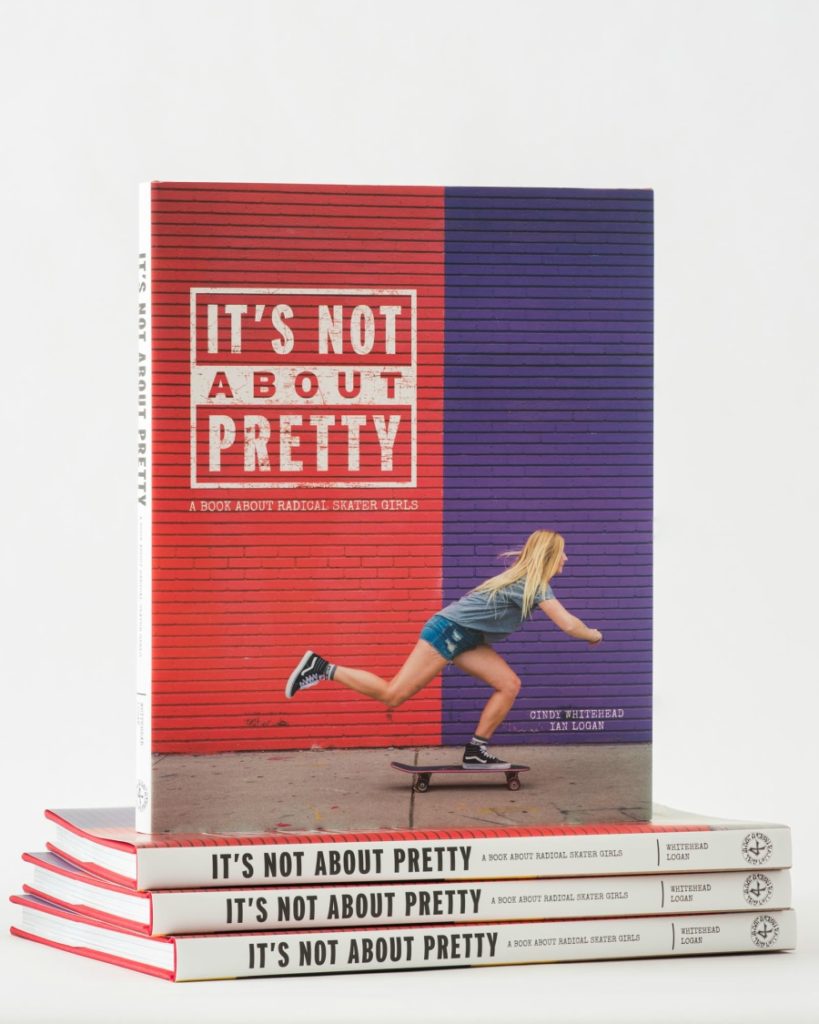 SH: Any words of advice for young girls just starting out in this action sport?

CW: Just keep trying, there is a learning curve. Keep doing what you're doing and stay with it! If you love it, it's going to come far. Everybody has a hard time in the beginning, just like with anything you learn. And also, just have a good support system—I think that's the best idea.