It's been a huge week for singer-songwriter and actress Coco Jones. She released her new single, "Let 'Em Know" earlier this week, and the music video for the track is out today. We caught up with her to get the inside scoop on the new track and find out a few little-known facts about her Coco herself!

What's the one makeup product you can't live without?

1. Eyeliner, because even on my worst days, if I have eye liner, I feel like I look great. So that's just a necessity for me. And also, it's really small and compact, so you can just put it in your purse. I like the NYX eyeliner. I get their liquid one and their regular pencil one.

2. I mean it's not strange, but I have a lot of almonds, like two cans of almonds, in my purse, in two different flavors. So I guess that's strange. Having one would be normal, but two? I don't know!

Describe your favorite pair of shoes?

3. My favorite pair of shoes would be something cute and comfortable, because I do a lot of activities during the day and I'm trying not to have my feet on fire. So that would probably be my black Pastrys. They're really, really cute. They have all these studs, but they're super comfortable and very flexible, so I can do a lot with them.

4. This is totally not what people would expect, but The Lorax is my movie! Whenever I'm just wanting to watch something, I'll watch The Lorax. And they just took it off Netflix and I had a small breakdown.

What single album defined your childhood?

5. The Raven-Symoné album. I don't know what the name of it is, but she has on the purple sleeping mask and that definitely defines my whole childhood. I was obsessed with that whole album. I just listened to it today and had flashbacks.

What's your zodiac sign and what does it say about you?

6. The Capricorn, that's mine. I don't know how I feel about that, because I tried reading up on it and everything and it made me feel a certain way, like I had to do certain things in order for whatever to happen. But I don't really read up on it. Something about me being courageous or something like that, which is true.

Who's your single biggest inspiration as a musician?

7. That's a great question. I have a bunch. I take little pieces from people's careers. For instance, Beyoncé. I really like her work ethic. I follow her journey and everything. I've seen her upbringing and how she worked to get where she is. I'm really inspired by that. Another person I like creatively is Justin Timberlake. He's amazing. His music is so cool and so original. I don't have one specific person. There's always little pieces from everybody.

8. Probably me singing without noticing it at all. People will be like "Please god, stop singing!" and I'm like "Oh, what?!" I don't even notice it!

And if you could have any meal right this second, what would it be?

9. I like love food, so things just started flooding into my mind. I'm going to go with shrimp alfredo. Yaaaasss! Pasta is life! 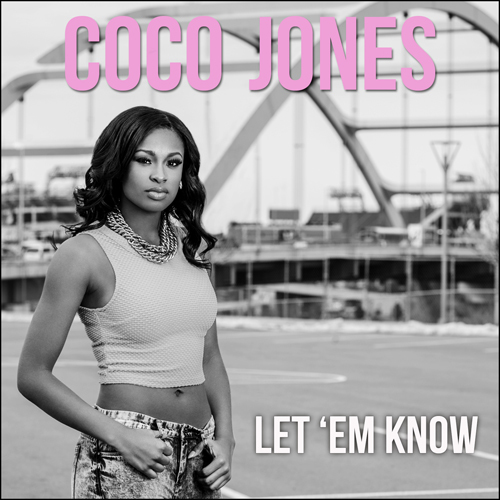 Your new song "Let 'Em Know" is out. What can you tell me about the song?

"Let 'Em Know" is kind of a transition for me, just because I really wanted to find my sound. I feel like "Let 'Em Know" is the little sneak peek of what's going to be coming up on my album. It's the new sound that I'm going for and I hope that everybody really enjoys it.

What was the inspiration behind it?

I'd performed a song I really liked written by this team of producers. They really liked my voice and decided to write for me, based on who I was and what I wanted to say. They sent me "Let 'Em Know" and I fell in love with it, just switching up some of the lyrics to make it a little more relatable to me and my age group. After that, it all came together. The producer, Thaddeus Dixon, kind of got my vibe and he really captured it in the song, so I immediately fell in love with it.

Why are you excited for your fans to hear the new song?

I'm excited because I know they were really anticipating something from me and on the edge of their seats for me to bring them a new single. I know they were craving it. I'm excited for them just to have it. It takes time, but I wanted to get something out there for them to hear my new sound. I'm really excited about it. It's more pop, but also has a little taste of urban that I always really enjoy.

What was it like to film the music video for this song?

Filming "Let 'Em Know" was really, really cool. It was my first time working with WilldaBeast, who is an amazing, amazing choreographer. And it was so cool, because he brought all of these up-and-coming dancers and they were all so enthusiastic just like me. They're really hard workers and it was so fun to like get that vibe from other young people my age.

What themes from the song did you aim to get across in the video?

The theme that I really wanted was just carefree and kind of international. I had a lot of my favorite people and guests appear in it, just because I wanted it to be relatable to everybody, so I kind of have this theme of everybody saying 'Ayy Yo'. It's like a group coming together, a group of people that are really cool with each other.

What else do you have planned in the near future?

Honestly, I'm still working on my music and I want to have a full body of music that I can get out there, but it takes time to make everything the way that I hear it in my head. That's still a work in progress. This summer I'm going to be touring all over the place. I've got to get prepared for all these concerts coming up and my Coco Locos got to get prepared to come to them and support me!

I just want to say thank you guys to everybody who listens to "Let 'Em Know". I hope you guys like it. Be sure to check out my website, therealcocojones.com, for all the tour dates and all the info. I'll keep you guys updated on my Twitter, @TheRealCocoJ. And my Instagram, @cocojones.

Check out the music video for Coco Jones' "Let 'Em Know" below and be sure to leave your thoughts in the comments! You can also join our Coco Jones fan club only at SweetyHigh.com.