21-year-old Cody Saintgnue is a model and actor who has made a huge splash with his recent addition to the cast of MTV's Teen Wolf. 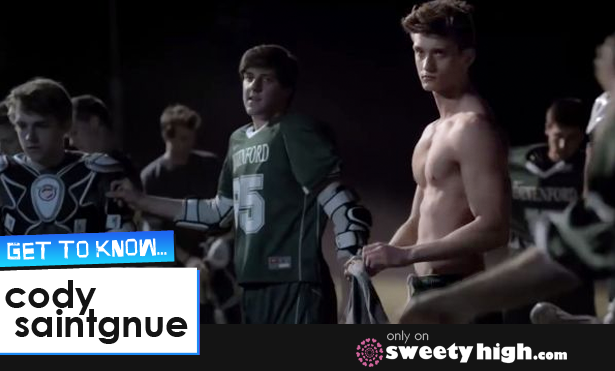 In a recent interview, Cody spoke with us all about Teen Wolf, his introduction to acting and much more!

Before he ever considered acting as a career, Cody Saintgnue started out as a model.

"I did the modeling to impress a girl," he laughed.

He did that for a while, until his modeling eventually opened up doors for him as an actor.

"I had a lot of emotions growing up, due to my childhood, so acting was a very good release," he said.

It wasn't long before Cody was fully engrossed in his acting. It felt like what he was meant to do.

"It was my niche," he said. "I was great at sports but this was what Cody was personally good at. When I saw the power it had to affect people in a positive way, that really solidified it for me."

Starting in 2009, Cody's talents earned him a number of roles in TV as well as feature film. One of the highlights came when he was 17 and appeared on House M.D.

"I played a kid who had cerebral palsy," Cody said. "That was something I wanted to do for a long time."

But he said his latest role, as Brett Talbot, on the hit MTV series Teen Wolf has been his biggest acting achievement to date.

"I was a fan of the show and it's really taken me to a whole 'nother platform for my career," he said. "I'm very thankful for it."

So far, Brett, a lacrosse player who also happens to be a werewolf, has appeared a few times throughout Teen Wolf's 4th season.

"It was truly humbling that a hot hit TV show wanted me to be part of their cast," he said. "It was indescribable. I just was so thankful and so humbled and so excited."

It didn't take long for fans of the series to fully embrace his character. The adoration is apparent on Twitter, where fans have gotten his name to trend a number of times.

"It's overwhelming in a way," he said.  "It's so flattering. I take acting so seriously and I really work hard on my roles to bring something special to them, and to see such a great reaction from it all is a dream come true."

Cody said that Brett's appeal is that he's "the bad boy that you love to hate."

"I think there's a certain intensity to Brett, and a certain power that he holds," Cody explained. "It's just his presence."

He added that there's more to Brett than just his "bad" image.

"He's comes across as a bad boy with the way he holds himself but he has a really good heart," he said. "That's the thing with Brett. He's not a pushover, but if you've seen the last episode, he was protecting his little sitter. He has a good heart and he will do the hero thing, with a bad boy style."

So what has it been like to play a werewolf on TV?

"Hairy," he joked. "It's really cool. I've always wanted to play a supernatural, whether it's a vampire or a werewolf, and I'm definitely loving the whole werewolf thing."

Playing a werewolf has given Cody the chance to test his acting chops in an entirely new way.

"It's exciting," he said. "It's current and it's primal. Werewolves and the supernatural have been very popular, but to actually be able to play one is very cool."

The young actor cited Bradley Cooper as one of his biggest acting inspirations.

"I love how current he is and I love how diverse his characters are," Cody said. "He does all of them well and I think that's what I want to portray with my career. I think he's really cool and I definitely look up to him."

One of Cody's dreams is to share the screen with Bradley Cooper.

"I would love to play his son in a role," he said. "I would just love to work with him.That's on my vision board."

To keep up on all of the latest updates from Cody Saintgnue, be sure to follow him on his social pages below! Also tune in to Teen Wolf on MTV Monday nights at 10/9c, and join us at SweetyHigh.com to share all of your favorite Teen Wolf news and more!