Here's What Happened When I Visited Flora Giragosian, the Coffee Fortune Teller

I'm guessing I'm not the only person who watched Harry Potter and the Prisoner of Azkaban and wished I could have my fortune told through a tea leaf reading.

At the time, I didn't even realize tasseomancy—the art of using tea leaf and coffee ground patterns for divination purposes—was a real practice. Recently, a little research led me to discover Flora Giragosian, the Coffee Fortuneteller, whose work immediately stuck out to me.

I reached out to Flora, who was kind enough to invite me to her home in Glendale to offer me a cup of coffee—and then use it to read my past, present and future.

From the moment Flora invited me in, I knew that I was going to have a good reading. She greeted me with kindness, and the decor was bright and inviting.  As she began to prepare the coffee for my reading,  I asked her about how she started her fortunetelling.

Flora is originally from Armenia, and she told me that she's been reading fortunes for more than 30 years. Her mother was a seamstress, and in Armenian culture, it's common courtesy to invite them in and offer them coffee when they patronize your business. That tie to coffee is one way she discovered her gift. Her mother also had some of that ability, but when it came to Flora, she felt like it was a powerful force that simply had to be shared with others. Her sons encouraged her to pursue those abilities and see customers—and they even set up her Yelp page, which happens to be exactly how I stumbled upon her business.

Flora offered me some delectable Armenian pastries as I waited for the coffee to brew. She commented that she expected me to be older because I had a mature presence on the phone. When she asked me what my zodiac sign was (I'm a Sagittarius) she said that was exactly what she had expected based on that maturity. She pulled out a set of tiny mugs before selecting an adorable Sagittarius-themed cup and zodiac saucer, filling the mug with deeply colored coffee and placing it before me. 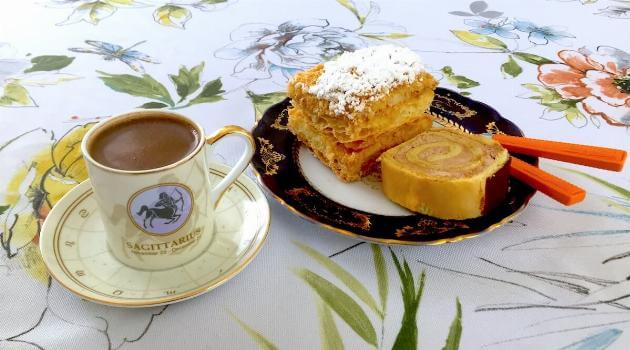 Before taking my first sip, I had to let it cool for a while. I held the cup up, blowing away little puffs of steam, as she explained that it was a Brazilian coffee prepared in the Turkish style. Turkish coffee is an unfiltered coffee made by grinding the beans down into a fine powder and bringing them to a boil with water in a special pot over heat. After the coffee is consumed, the grounds left in the bottom of the cup allow the reading to take place.

She also warned me that it's not uncommon for people to cry or otherwise get very emotional during their readings. This surprised me at first, and made me very curious about what my coffee might reveal about me, and whether those things might upset me in some way. At the same time, she wanted me to know that she cared about me and that anything she said was meant to help and guide, rather than to offend. If something was hard to hear, it would be because it was the truth, and because it would be coming straight from her heart.

While I waited for it to cool further, I enjoyed the pastries. The roulade, filled with a cocoa custard and topped with a fine layer of chocolate, was soft and scrumptious, but I loved the flaky, powdered-sugar-coated Napoleon even more. When it was finally time to take my first sip of the coffee, I found the bold, slightly bitter taste delicious. I can be a bit sensitive to caffeine so I don't have coffee much, and I found it to be a real treat. A little sugar made it easy to drink, and it wasn't long before I'd sipped the coffee away and all that was left was the residue of ground coffee at the bottom of the cup.

Next, Flora asked me to make a wish (which I intend to keep private) before placing the saucer over the rim of the cup and then pulling them both toward my heart as I flipped them upside-down. As I waited for the grounds to settle, she asked me to read the description on the bottom of the cup. I felt it was an apt description. 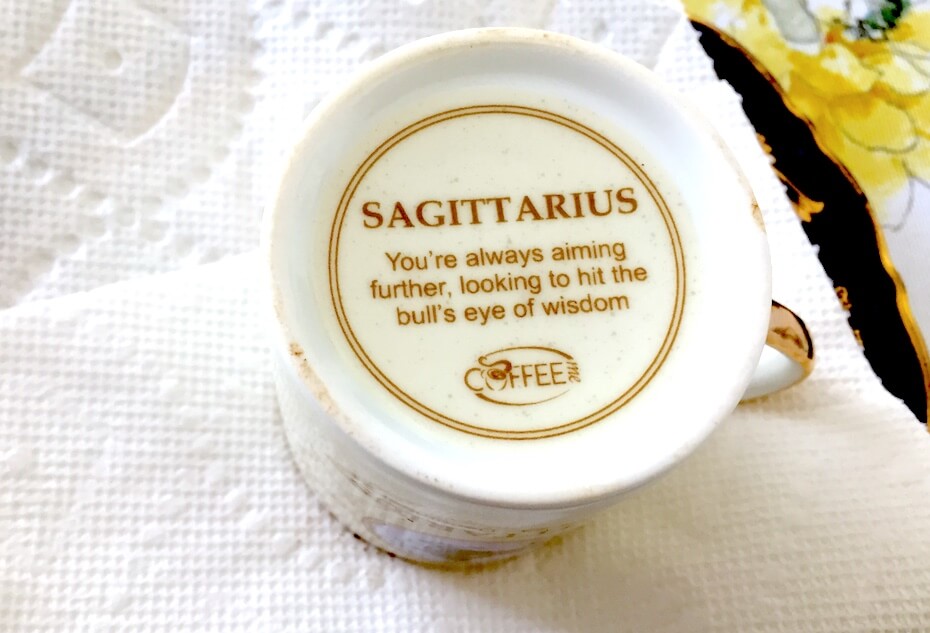 After a few moments, she had me lift the cup. Typically, she reads the formation the grounds leave on the inside of the cup, as well as whatever spills down onto the saucer. Perhaps I drank too much of the liquid, because only a few dribbles made their way out of the cup. However, Flora insisted that this wasn't a problem and continued with my reading, focusing first on the markings left inside of the cup.

Flora started with a description of my personality. She said that despite the fact that I'm very quiet, there's a lot going on inside of me, and that I'm like an emotional volcano waiting to erupt. In new situations, she said, I tend to be quiet, observing and listening rather than speaking out. I focus on understanding situations and taking in all of the information before I act. Perhaps she'd observed these things about me in our opening moments together, but I found this account to be spot on.

One of her biggest concerns was with my connection to my emotions. She said that I needed to show them more, to demonstrate when I really care and communicate what I'm feeling with others. Historically, I find that to be true, and I've spent the last couple of years specifically working on better understanding my feelings and sharing them with others so that that they don't get bottled up. I thought that it was great that she was able to accurately tap into that.

She saw me as a quiet and reserved person who only truly opens up to a select few in my life. She said that in my childhood, I was more open, but that I'd learned to be closed off, and that back then, I wanted to make a big name for myself and make my talents known. She saw that whatever my dreams were at the time hadn't exactly come to pass, and that I might still be enjoying a successful career. As far as I can recall, I was a very shy child, but that doesn't mean this prediction was all wrong.

Flora dove into my work life as well. She said that I'm very ambitious, likely more than my siblings, and that I have a different career path from them. While it's tough to compare drive, I'm a writer and project manager and my sister is an accountant, so it's safe to say our jobs are in different areas.

To me, it seemed that Flora's biggest focus during the reading was on my relationship. She started by correctly stating that my husband is more extroverted and has a bigger personality than me, and also that I'm the younger person in the relationship. She also said that the partnership can sometimes feel lopsided, like it isn't split 50/50 down the middle. Though I think this is something that can be said of most relationships from time to time, it did strike a chord with me because of a similar number-based analogy my husband and I have used to discuss certain topics in the past.

She also said that he's holding onto something that hurt him in the past that hasn't been fully communicated to me. While part of me doubts this—typically he shares everything, and his past is pretty much an open book—it's possible there are things he hasn't properly addressed and doesn't feel ready to communicate just yet. In fact, the need for more communication was a common theme throughout my time with Flora. Though I feel like I've been doing a much better job expressing myself and sharing what I want and need over the last year or so, I think communication is something I can always work on, and I didn't mind having that reiterated.

She also made comments about my feeling tied down in my relationship, and that I wasn't actually ready to settle down because I require more freedom. While those things didn't exactly ring true to me, I made sure to take a note of it in case this became clearer later.

She correctly knew that my anniversary had either just passed or was about to come. However, for our anniversary, she envisioned that we had plans to go on a trip, but that he postponed them and we did not get to go. This never actually happened, but who can be certain that she wasn't picturing our next anniversary? I don't want to reject the idea outright, so I'll keep my eyes open.

I tend to be a big crier when I'm upset, so after the warning that I might become overwhelmed with emotion during my reading, I was on the defensive. However, besides a little jitteriness from the caffeine kicking in, I didn't have a strong emotional reaction to anything I heard during my time with Flora. Anything negative or difficult around my life was either something that I'd already accepted as the truth or didn't quite seem accurate to me. Again, I didn't want to deny these ideas, so I thought over them carefully and worked on seeing if they could apply to my life in other ways. Perhaps this gave me the distance not to be hurt by these words.

Flora managed to get all of that from the pattern of grounds inside my cup. When she was done reading that, she had me make another wish and press my finger down into the leftover sludge at the bottom of the mug until I had cleared a white space. She read this as well, saying there was going to be a parachute in my life. It would capture me and change my direction in the near future, and though it would help me find exactly what's right for me, it might not be a happy thing for me at first. I'll have to pay attention to see if that comes to pass. 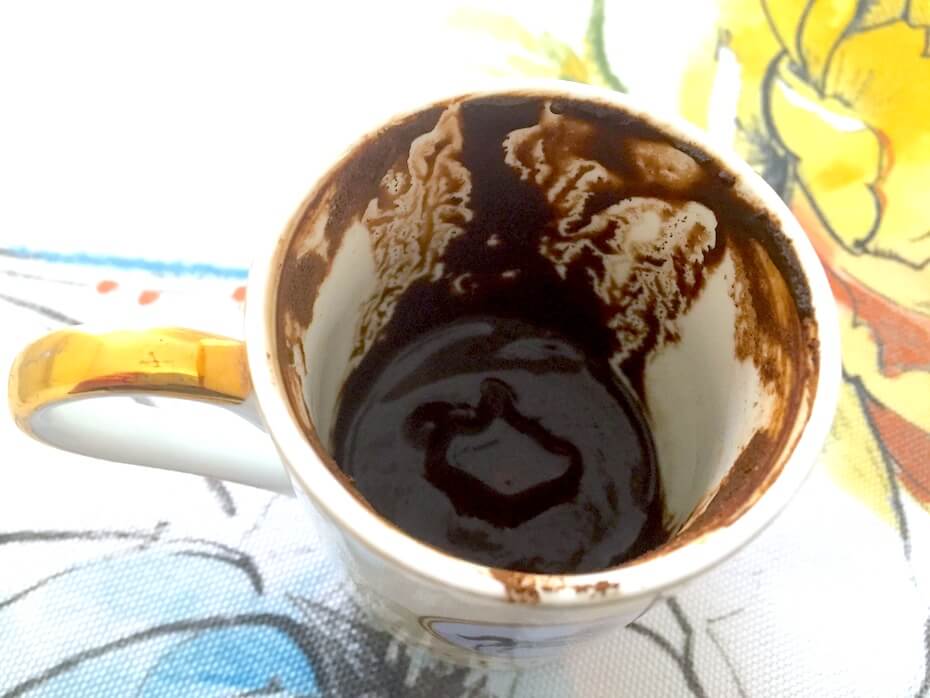 I had a wonderful time during my reading with Flora, and though it wasn't 100% accurate, I felt there were more hits than misses. Even though she knew I'd be writing about my experience for this article, she made sure not to hold back or sugarcoat anything, and I truly felt that the entire reading was from her heart. It was a unique experience, and the coffee and tasty pastries she served were delightful, too.

Flora was thoughtful and kind, really taking her time to give me as thorough a reading as possible. From beginning to end, the experience took about 45 minutes. She encouraged me to follow up with her if any of her predictions come true. I'm curious to see if they do, and hope that her insights will be able to guide me further when that happens.

If coffee reading sounds interesting to you, click HERE to learn about the art of bibliomancy.