Conrad Sewell Dishes On "Hold Me Up": 20 Questions With Conrad!

Conrad Sewell's "Hold Me Up" needs to be your jam this fall (and if it isn't already, do yourself a favor and click here to listen) and his All I Know EP, out November 13, deserves a spot on your wish list. We chatted with Conrad to find out what inspired the hit, what we can expect from the new EP, AND you'll never in a million years guess his weirdest habit! 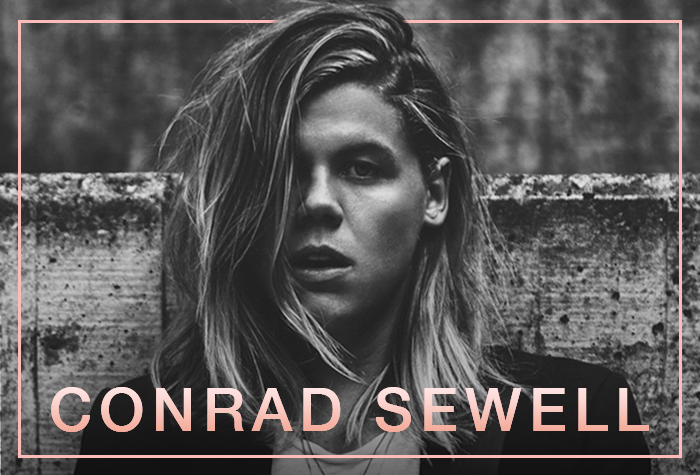 1. What was the inspiration behind "Hold Me Up"?
I wanted a song like Pharrell's "Happy" that makes you feel good, with a big, anthemic pop song and a huge vocal hook. It's about the people in your life who've been there for you when times weren't so good, when you're in that lonely hour and nothing seems to be going your way. I thought that was a message that everyone could learn from.

2. If you could live in any movie, which one would it be?
I'm a massive chick flick fan. Clueless is one of my favorite films ever. That or Forrest Gump, because that guy did everything.

3. Which fictional character's style would you love to steal?

4. What's the last song you had stuck in your head?

? "If you like causing trouble up in hotel rooms…" ? "Perfect" by One Direction

It's my head down, touching my hair with a little bit of a pout going on.

7. Is there anything you can tell us about your All I Know EP?

It's all about my journey up until now. I wanted to write something vocally moving. I'm just throwing my heart out there on these songs. There are moments of sadness and moments of pure happiness. I want it to take you on a little journey.

Journey – "Don't Stop Believing" because it's the hardest song to sing, and I'm very competitive and I smash it.

9. If you could only eat one food for the rest of your life, what would it be?

McDonald's. Just a Quarter Pounder meal or a Big Mac meal with a bit of mayonnaise on the side.

To win a Grammy.

11. If you could instantly learn any one skill, what would it be?

To be able to pick up a language in an instant.

Any of The Mighty Ducks movies, any of the Home Alones.

13. Who would play you in a movie about your life?

14. What's in your pockets right this second?

15. What was it like to tour with Ed Sheeran?

I'm a massive fan of his. The stadiums were huge, and he has such a passionate fan base. When I left the stage, I left with some amazing new fans. He's a great guy and we hung out a bunch. He taught me a few lessons to keep me steady on the road.

16. If you could listen to just one song for the rest of your life, what would it be?

"God Only Knows" by the Beach Boys.

A lion. I'm the king of the jungle.

Cars. I don't know if it's a phobia exactly, but I'm the worst backseat driver in the world. Every time I get in a car, I think I'm going to be in a car accident.

19. If you could go back in time and be the featured artist on any track, which one would it be?

It would have to be "All Falls Down" by Kanye West, and I would have sang the "Oh when it falls, it all falls down…" bit.

20. What's the last photo in the camera roll on your phone?

We also asked "Fight Song" singer Rachel Platten which movie she'd love to live in. What do you think she picked?