Crash Team Racing: Nitro-Fueled will be out by the end of the month, but since it was available to play on the floor at E3, I decided it wouldn't hurt to get a sneak peek.

I loved the original CTR game back in the day, so I couldn't wait to see this newly remastered version and find out how it might stack up.

When I got my hands on the demo and landed on the character selection screen, my eyes were immediately drawn to all the blank space below the 17 available racers. It appeared to me that up to 30 could fit on the screen at once, and the fact that the L1 and R1 buttons are indicated on the top of the screen hints that there may actually be multiple pages of playable characters in the final game. 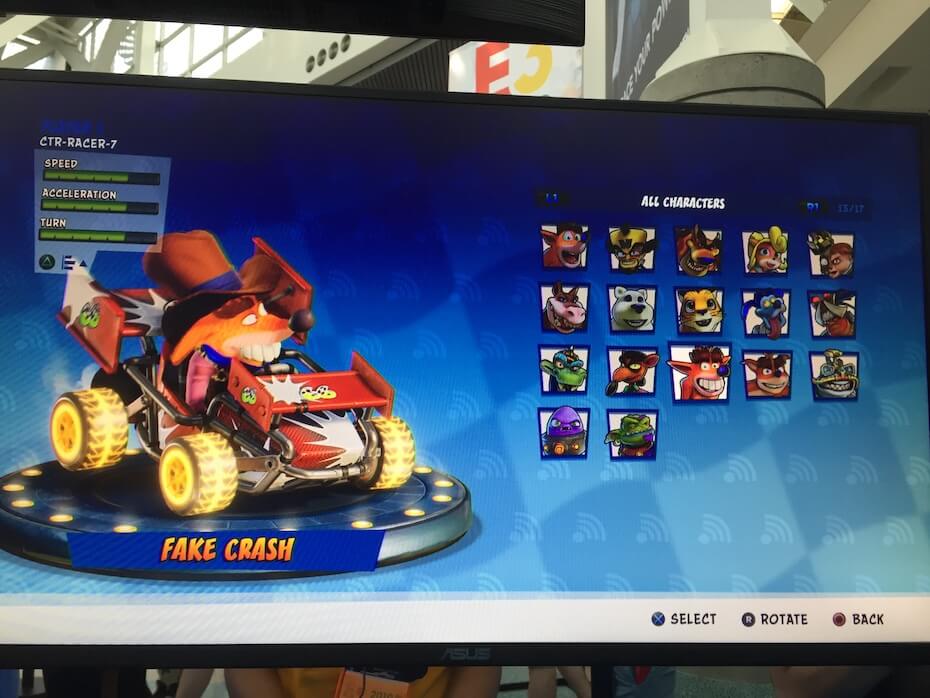 But even these 17 racers felt like plenty to pick from, with a roster featuring both classic and more recent additions to the Crash mythos. For the first race, I selected the adorable polar bear, aptly named Polar. The game offers different skins for each character, so I dressed him up as a cute little panda. The game also gave me options to customize my kart and wheels, with options to even add stickers and decals, though I can't say whether this is totally cosmetic or actually has an impact on the gameplay stats. 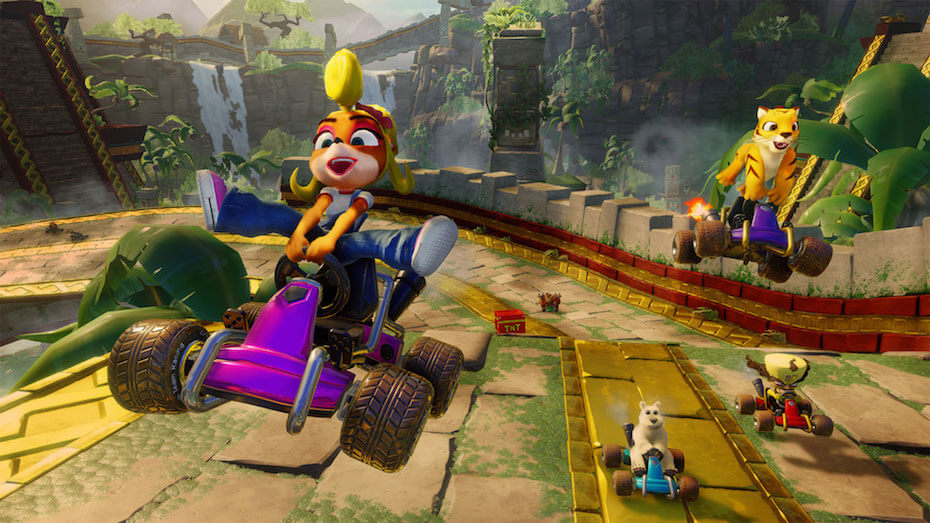 I got to race on two different courses during my demo. The first was Jungle Boogie, a lush rainforest level that was perfect for practicing and refamiliarizing myself with the controls of CTR. Like in other racing games, you can use the shoulder buttons to hop and make dash turns around corners. At first, I didn't have a handle on this at all, underestimating the sharpness of every hop and turn. I'm a bit embarrassed to admit it, but I was in dead last for a good chunk of the race.

While that didn't bode too well for me at first, Crash Team Racing's strength has always been that it does its own thing. The karts have a unique way of handling, with extremely tight turns that totally threw me off because I was so used to other kart racing games. Of course, this also means the movements are more precise than in other games of the genre, and you don't get racing quite like this anywhere else. That slickness was a core feature in the original CTR, and this game feels like a faithful recreation.

Also back are the items of the classic game, including the protective Aku Aku (and Uka Uka) masks, projectile bombs, gooey green barriers, TNT crate and nitro vials. Collecting and utilizing the right item at the right time can either be the cause of a miraculous comeback or destroy a first place racer's run. For this reason, items are loved as well as loathed. 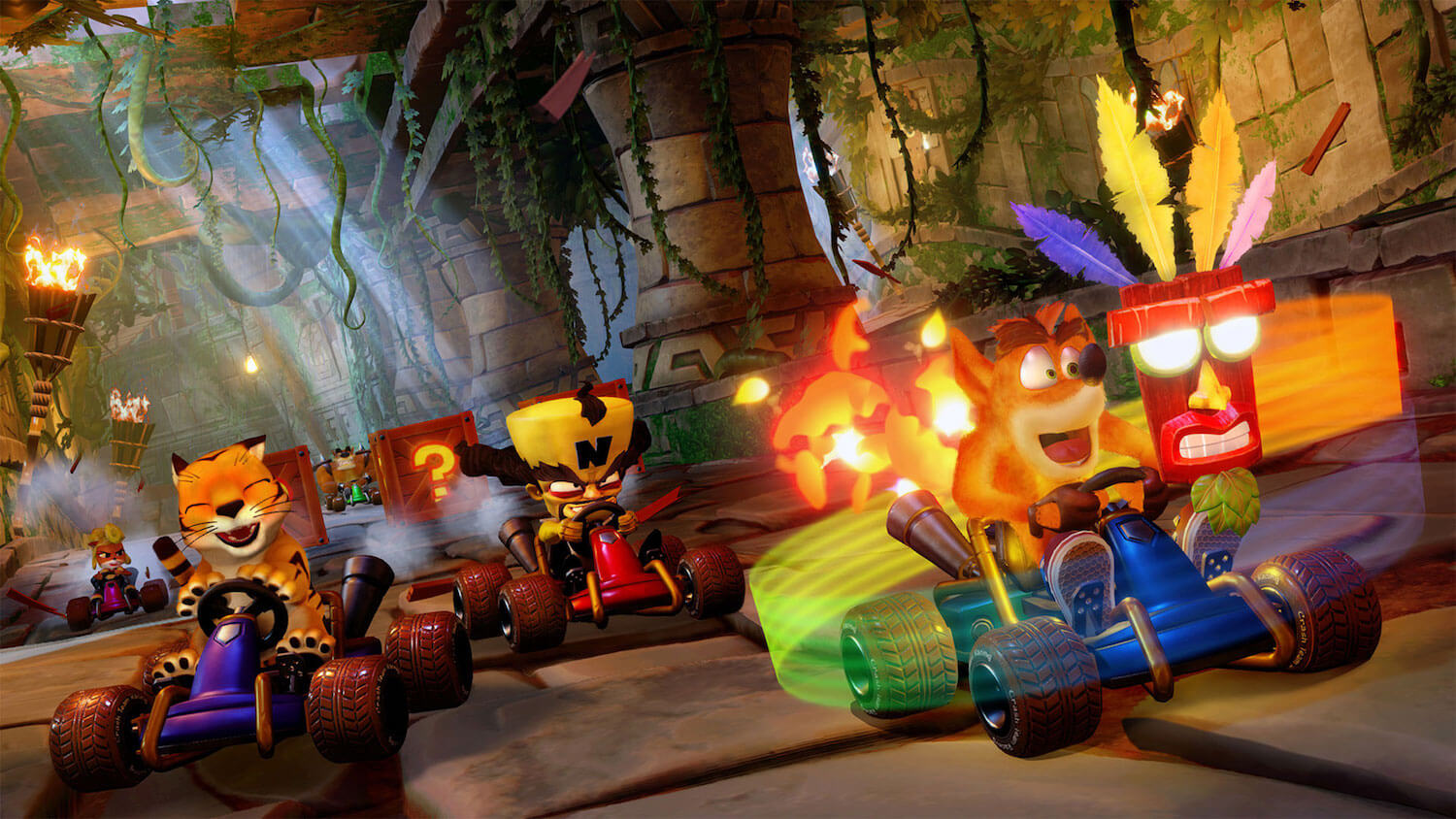 Perhaps thanks to those items (and relearning the ropes a bit during my run) I was about to rise from last place to sixth in that first race. For the second, I decided to pick the large-browed Fake Crash as my racer, dressing him in a ridiculous cowboy outfit to boot.

This time around, the track was Hot Air Skyway, a course floating perilously above the clouds. By this time, I felt I'd gotten the hang of things. Now, my hopping turns actually kept me on the track while my competitors fell off of it again and again. I even managed to take first place for the majority of this second race, but in the third and final round, I found myself getting hit by attack after attack from other players, frustratingly finding myself in a fine third place at the end of it. 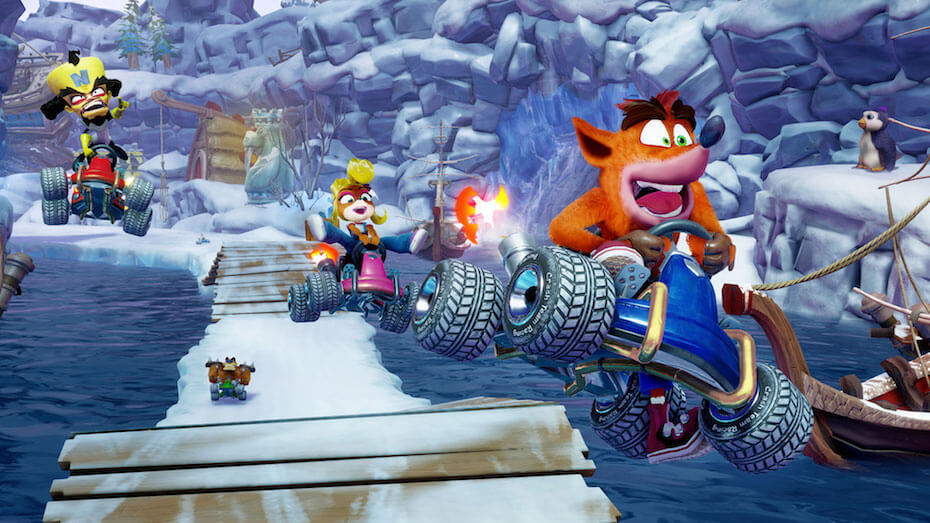 I know I have a lot of room for improvement, and look forward to doing better when Crash Team Racing: Nitro-Fueled releases on June 21. It'll be available on Nintendo Switch, Xbox One and PlayStation 4.

Not familiar with Crash? Click HERE to find out all the reasons you'll love the N. Sane Trilogy.