If you're a proud Mahomie and have always wanted your own private Austin Mahone concert, now is your chance! Pop-Tarts is making it possible as part of the Crazy Good Summer Concert series! 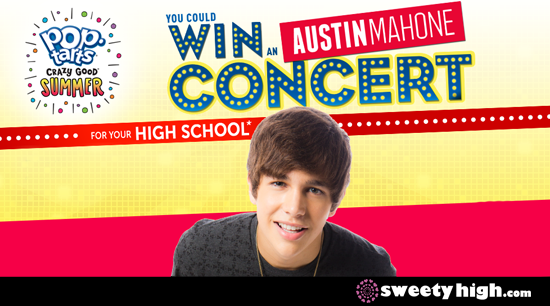 Until July 31, fans can redeem codes on Pop-Tarts boxes for a chance to win a free, private Austin Mahone concert for their high school to celebrate Pop-Tarts' 50th anniversary. Each code will enter you in the contest three times!

In this third annual Crazy Good Summer Concert Tour, Austin will return for the third time! The tour, produced by Live Nation, will be free and take place in three U.S. cities.

The lineups and locations will be announced two weeks before each show. Stay tuned, because only a limited number of tickets will be available for each city.

"It's cool that Pop-Tarts is helping me surprise my fans with a private concert this year," Austin said. "I'm excited to mix things up for my third Crazy Good Summer."

Comment below if you plan on entering the contest and join us at SweetyHigh.com to share your favorite Austin moments, pics and videos!