Sisters Colby, Shelby, Carthi and Faith Benson make up the incredible pop-alt band Crimson Apple, and we cannot get enough of them.

Originally from Hawaii, the four moved together to Los Angeles to pursue their musical dream—and we happen to think it's coming true for them.

The claustrophobic and chaotic, yet totally powerful music video for their new single, "War With My Mind," released today, and we were lucky enough to find out all about the new track and so much more, directly from the band. Keep reading to find out what they had to say:

Sweety High: Have the four of you always known you wanted to make music together? How did the band come about?

Colby Benson: When people first find out that we're all sisters, they assume that we've been playing music together our whole lives, but honestly, we all found our love of music at separate times. One day, we got to a point where we realized we made up all the pieces of a band, and decided to pursue music together. 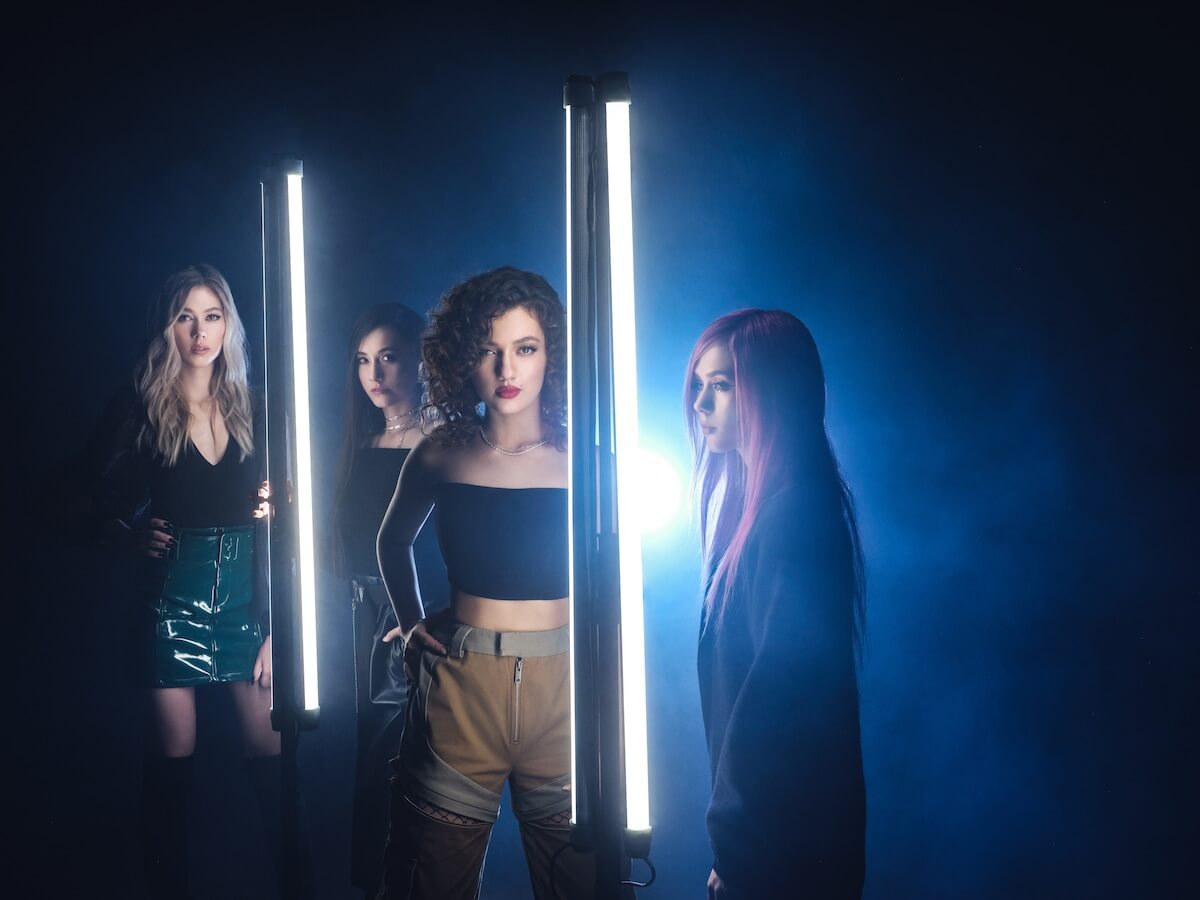 SH: What are the challenges of being in a band of sisters, and what are the advantages?

Shelby Benson: Oh man! This is a great question—we definitely see a lot more advantages than challenges being in a band of sisters. One thing we've noticed is that we find it hard to separate work and family life. It's difficult not to talk about the band when we're all together! As far as advantages, we all know each other so well that we basically have no filter. We can be open and honest with each other, which helps our creative process tremendously. Even if we get into little fights here and there, at the end of the day, we always know that we're coming from a place of love.

SH: Where did the name "Crimson Apple" come from?

Carthi Benson: The name "Crimson Apple" actually stems from the lyrics of a song called "Wine Red" by The Hush Sound. It used to be one of our favorite songs to cover when we first started out as a band. The full line is "Who shot that arrow in your throat? Who missed the crimson apple"? We thought it was a pretty cool image!

SH: What was the songwriting process behind "War With My Mind"?

Faith Benson: For this specific song, Colby (vocals) came up with the idea of "War With My Mind" and brought it to the band. We all worked together to flesh out the idea and make it into the song it is today.

SH: What was the inspiration behind the song? Is it based on a real experience?

Shelby: Yes, this song was inspired by a real experience that Colby went through. When writing the song, we all took inspiration from the sucky emotions you can get when your heart and mind don't want the same things in a toxic relationship.

SH: What kind of themes from the song did you want to get across in the music video?

Carthi: With the direction of the music video, we were really inspired by the idea of creating a "mindscape." The song speaks of anxiety and insanity in love, so we really wanted the music video to feel chaotic, as if we were going crazy inside our own minds while battling our inner desires.

SH: What was the most memorable moment from the shooting of the music video?

Faith: The most memorable moment from shooting the music video was when we shot the "water" scenes for the bridge of the song. We were out on our back patio in the middle of the night literally pouring buckets of water on each other. It was freezing, we were all sleep-deprived, and Carthi kept yelling at Shelby for throwing the water wrong. It's definitely a fun memory!

SH: How has the pandemic changed the way you all make music together, if at all? Has it been a challenge?

Colby: During the pandemic, we couldn't record in a professional studio like we normally would, so we decided to do everything ourselves! We recorded "War With My Mind" in our garage! It was definitely a new challenge and learning experience for us, but it allowed us to expand our knowledge and come out with a song that feels really authentic to us. After doing the recording process DIY, we were inspired to continue doing so by directing, filming, and editing the music video ourselves as well. We signed ourselves up for a lot of things we didn't know how to do, but in the end, we figured it out and it was all worth it!

Shelby: Thank you so much for doing this interview with us! We'd like to send out our appreciation to everyone who has been showing us love and support, you guys really inspire us to keep making music! For anyone out there who is new to Crimson Apple, we'd love it if you checked out the new single and let us know what you think!

If you're all about discovering new music, click HERE to check out our premiere of Wild Fire's new music video for "Cut U Off."