How to Decode These Common Emojis From Your Crush

Decoding messages from your crush can be tricky and a little bit stressful, but a single emoji might be the key to finally understanding how they truly feel about you. 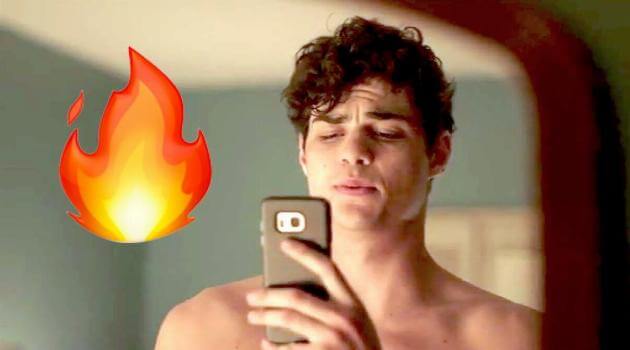 If you've been trying to interpret the real meaning of an emoji in your latest text or DM, keep scrolling for a little insight into your crush.

The flirty smirking face may seem like a cause for celebration when it's coming from your crush, but it may also be a signal that you should be cautious with them. The emoji is bolder than most, and may indicate that your crush is used to using this form of expression on people—meaning you might not be the only one they're messaging it to. Whether this emoji comes from a guy or a girl, if you're looking for more than a fling, it may be wise to watch out if you don't want to get your heart broken.

Even though the face with sunglasses indicates coolness, using it can signify that your crush is feeling anything but. Maybe they're feeling a little bit shy or uncertain of themself and are trying to make it look like they're playing it cool. You may want to bolster their confidence with a compliment and see how they take it.

If your crush texts the alien emoji, it might mean that they're been feeling like a weirdo or an outcast, but chances are that they feel like you're someone who doesn't judge them, and they feel comfortable and at home when they talk to you. That's definitely a good sign, so encourage them to open up further to push your relationship to the next level.

This mouthless face emoji signifies that your crush has nothing to say, or isn't quite sure how to respond, but doesn't want to leave you hanging. It means that they might be a little unsure, but that they don't want to let you down, either.

The winking emoji is a pretty straightforward sign that someone likes you and is trying to be subtly flirty in your messages. From a girl, this one may be more playful and platonic, but from a guy, it's usually a sign they're interested. Unless they're a major flirt with absolutely everyone, don't be afraid to flirt right back.

As bizarre as it might seem to be on the receiving end of a poop emoji, it can actually be a really good sign from your crush. It's usually an attempt at humor, with your crush attempting to catch you off-guard and start a conversation with you. It might mean that they're eager to talk to you but aren't really sure where to start, so give the pile of poop a chance.

Though this emoji can have a number of meanings, in the context of texting with a crush it usually signifies thanks. It means that your crush is feeling grateful to have you in their life—but more information is needed to know whether they're into you romantically.

The tongue emoji is playful and silly, and your crush probably won't message it to you unless they like you at least a little bit. Often, it'll follow a bold statement, with the stuck-out tongue added to imply that they might be joking. That way, they have the chance to backpedal on what they said if they don't get the response they wanted.

A nerdy face usually means that someone just revealed something profoundly geeky or embarrassing to you, but they're totally owning up to it. It means they trust you and aren't afraid to show you their true self—though that doesn't necessarily mean they want to be anything more than friends.

This nervous little monkey is usually a sign that someone has texted you something they can't take back but might have cause to regret. Now, they're a little bit anxious to see how you'll respond. It might be the perfect opportunity to let them know how interested you are.

The fire emoji is as straightforward as it gets, because it basically means that someone thinks you're looking hot. While it might be really nice to hear that from your crush, it's important to consider where they're coming from, first. Does it seem like an authentic revelation of how they feel about you, or do you think they might be aggressively flirty with everyone they message?

The eyes emoji is shorthand for "did you see that?!?" and if your crush texts it to you, they probably spied some drama and can't wait to dish on it with you. It means that you're the person they turn to when they can't wait to discuss something with someone. While that might mean that they see you as their best friend in the world, it could also mean that they see you as even more.

There's no denying that this is a flirtatious emoji, but does it always mean that someone has the hots for you? It all depends on the context. If you've just done the other person a solid, you may find that this emoji is simply a playful "thank you." However, if they use it often, and in many different contexts with you, there's a good chance they have a crush on you—especially if it comes from a guy.

Also read about: 15 Cheerful Good Morning Texts to Start Your Crush's Day on the Right Note

Now, here's a versatile one. While the upside-down face emoji sometimes just means that someone's being silly, you'll see it used more frequently as a tone indicator. Often, it denotes sarcasm—so you should take the text to mean exactly the opposite of what it says. It can also signify awkward situations or hopelessness. Again, the context of the conversation will help you to decode this one.

There's something about the classic smiling face with smiling eyes emoji that's all warm and fuzzy. As the default smiley, this one's not too difficult to decode. It just means that someone is happy, and they want to share those positive feelings with you.

While we've seen some workout fanatics use this one for when they get their sweat on, it's mostly used as an expression of embarrassment. If someone's just texted something super silly or awkward, and they follow it up with this emoji, it's generally an acknowledgment of what happened. If you're interested, play it off cooly and move on fast!

Who can resist those puppy dog eyes? While this emoji is occasionally used to recognize that something is preposterously adorable, it's really designed for begging for something. If someone's sending it to you, chances are that they want something from you, so take that into consideration before you send them your next text!

Here's another emoji that means all kinds of things, depending on the context! In addition to signifying tipsiness, it can also mean that someone's feeling sleepy or that they don't understand a situation. It also somewhat resembles the bad smirk face that some dudes make when they're trying to take a good selfie (and is pretty perfect for making fun of those people).

We love seeing this emoji when we're texting because it typically signifies good things. There's just something so peaceful and gentle about the relief on this little emoji, and when people use it, they're usually sharing that they feel grateful, comfy, relaxed and relieved. It's definitely a positive one, so when someone sends it, you can assume they're pretty comfortable with you, too.

Is there any exaggerated emotion that this face doesn't represent? The weary face can be a little confusing because it covers the whole span of human emotion, but do understand that when people use it, they're sharing some big feelings. While it was probably designed to represent the feeling of being overwhelmed, some people also use it when they're ecstatic about a situation, or just dramatically whining about the situation they're in.

Also read about: 4 Conversations You Should Never Have Over Text

It goes without saying that these two hearts represent love, but what kind of love? That all depends on the situation. Sometimes, people might use this when they're interested in someone romantically, but the smaller, pink hearts can represent an appreciation for a more platonic kind of love. People also use it to share that they're into something, so don't read too much into these hearts without more context.

Here's an emoji that shouldn't always be taken at face value. Yes, it's the smiliest of faces, but the context will tell you everything you need to know about whether someone is actually excited about a situation or if they're dreading it. Sometimes, this emoji ironically signifies misery, so keep an eye out.

Here's another emoji we love to see when texting the people we're crushing on. When you look at that warm, blushing smile and those open hands, there's no way you've got anything besides positive feelings. This one is affectionate all around, whether someone is just telling you how much they appreciate you and what they do for you, or if they're actually in love with you.

Wondering about your own emoji usage? Click HERE to find out what your most-used emoji reveals about you.

Also read about: Ear Piercings Ranked Least to Most Painful