The Cutest Garnet Birthstone Jewelry for Gals With January Birthdays

With its brilliant blood-red color and irresistible shine, January's garnet birthstone starts every year off with style.

With its romantic red shimmer, it's no surprise that garnet is representative of love, friendship and power, perfectly representing the hard-working, devoted Capricorns and Aquariuses born during the month of January. Whether you're a new year baby yourself, or are simply looking for the perfect gift for someone who was, just keep scrolling to discover the most striking garnet jewelry pieces (all under $100).

January girlies born under the sign of Capricorn tend to shy away from big, flashy pieces, which is why we love this dainty and understated pendant from Brilliant Earth featuring a single garnet flourish. It's chic and simple, with just a touch of red to allude to the month's roots without having to shout it to the world. 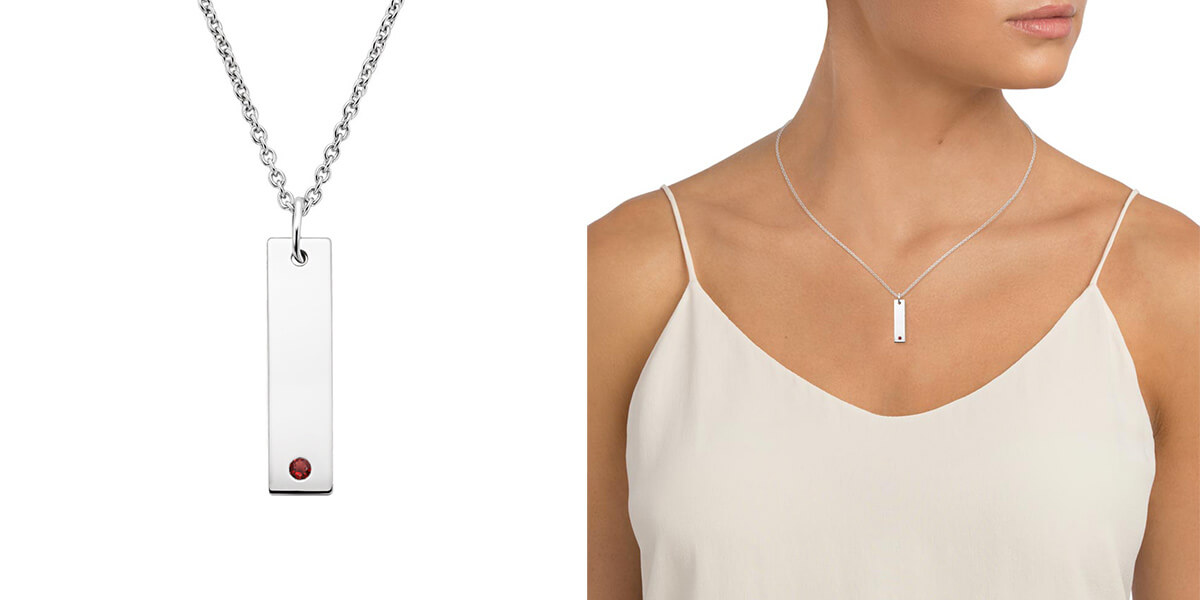 We love when natural garnet notes are so deeply red they're nearly black, and they look absolutely stunning on this Divine Passion bracelet from Karma and Luck alongside black onyx stones and gold-plated brass. It makes its statement with subtlety, with stones said to present determination, focus and reassurance.

(via Karma and Luck)

Also read about: The Cutest Topaz and Citrine Birthstone Jewelry for Girls With November Birthdays

Here's the perfect necklace for the romantics out there. Arcanum's Daily Lover Clasp necklace balances garnet with rose quartz and carnelian for an early Valentine's Day feel, with a sassy look and stones representing love, confidence and pursuing what the heart wants. 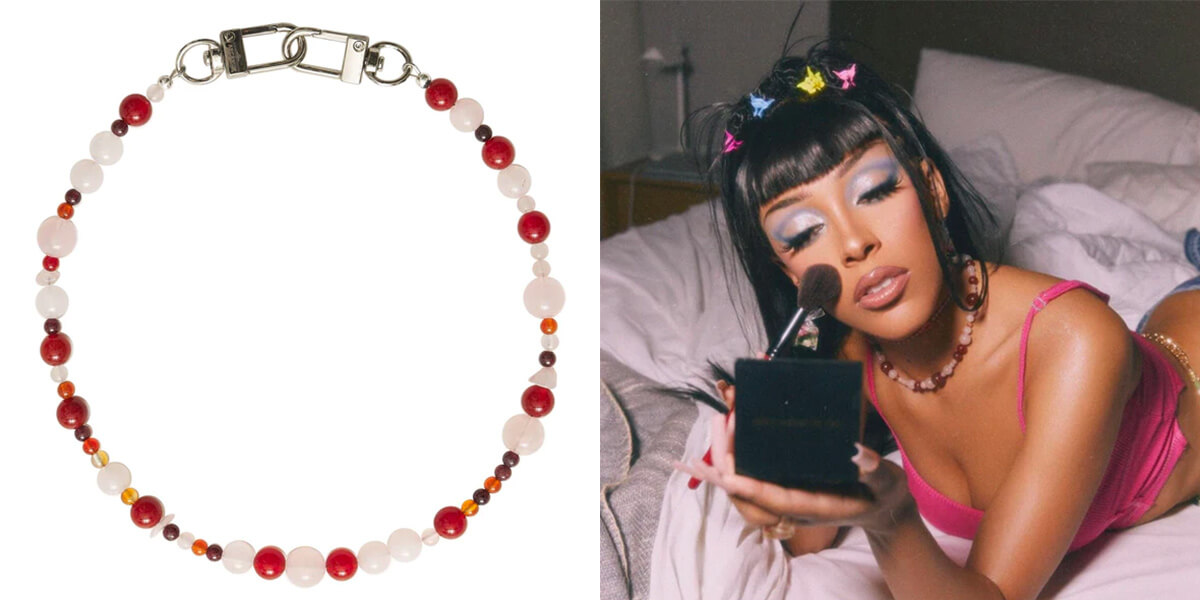 For the one who doesn't mind always being the center of attention, there's oomiay's Bachelorette Ring, consisting of a gold band with a vibrant red stone surrounded by a halo of white crystals, like flower petals or the flames of a blazing sun. It's elegant, yet playful, making it equally appropriate for nights out and everyday wear. 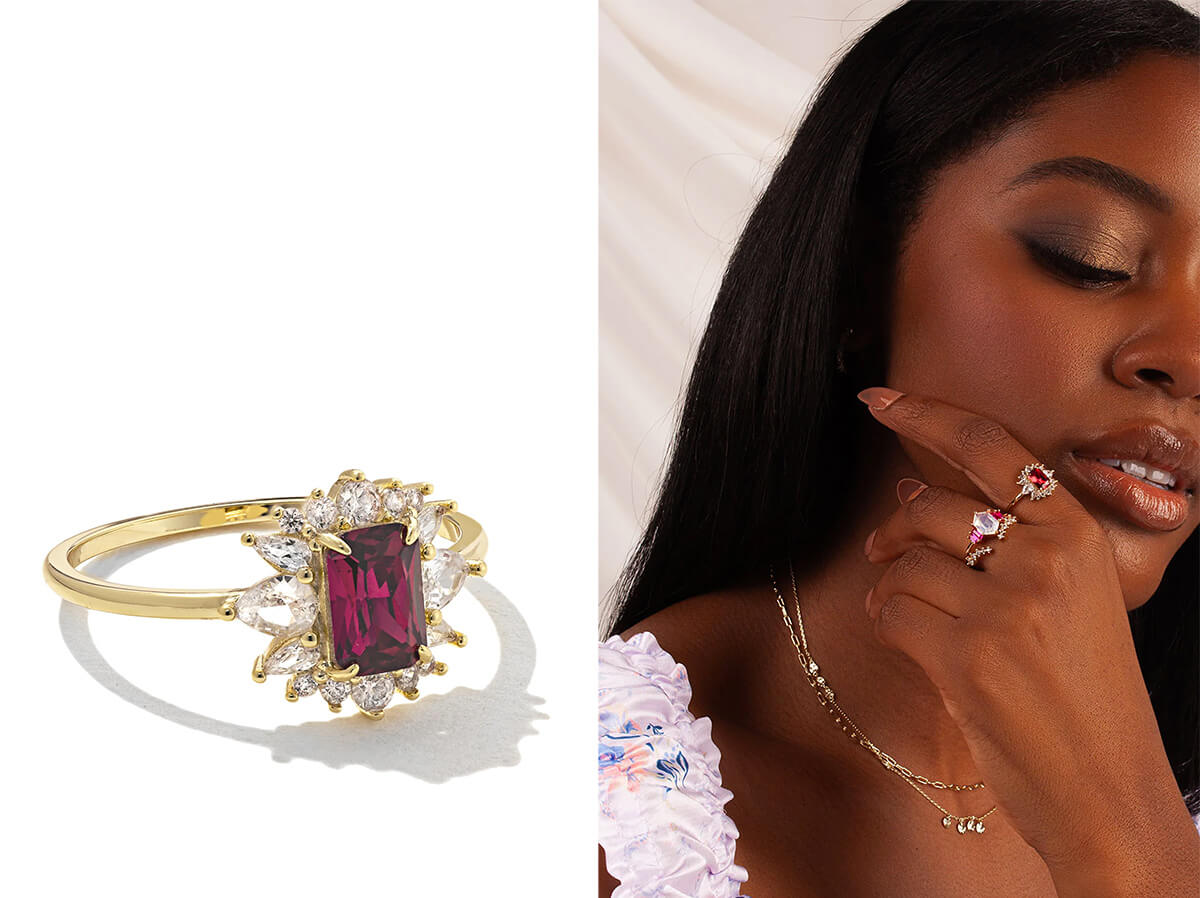 Also read about: The Cutest Opal Birthstone Jewelry for Gals With October Birthdays

Is there anything more classic than a massive heart pendant in garnet red? We think the multifaceted appearance of the fabulous stone in this Little Sky Stone Libi Garnet Heart Necklace makes this piece a bit less basic than most heart jewelry, making it feel like something out of a fairytale.

A garnet baguette stone beset with tiny cubic zirconia makes this ring from Caitlyn Minimalist simple yet striking. It's sparkly without being too showy, adding a pop of color when worn on its own or stacked with other gold rings. 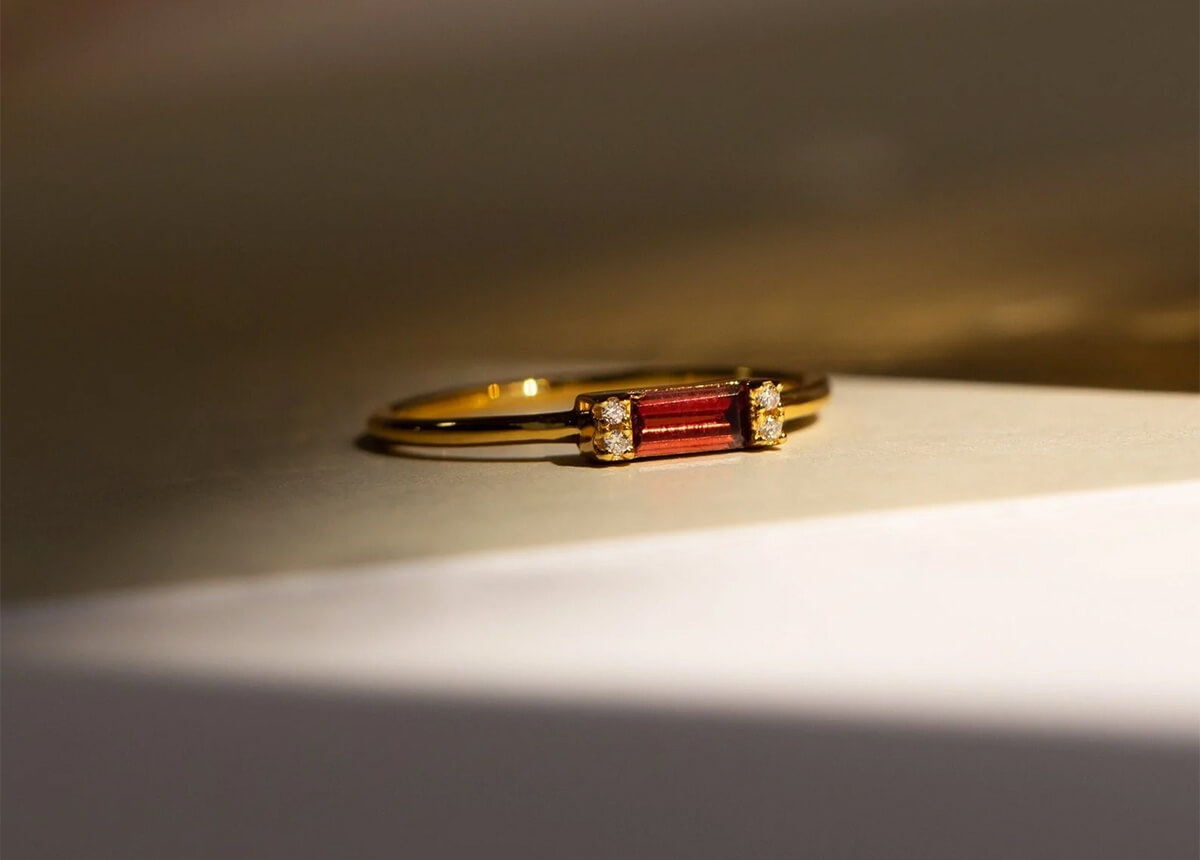 These Round Garnet Huggie Hoop Earrings from Regal Rose also feature the deep, deep red garnet stones we're so fond of, which look almost black and show off their red accents in the right light. The stone is perfectly paired with sleek gold loops and looks especially cute with other earrings to complement them. 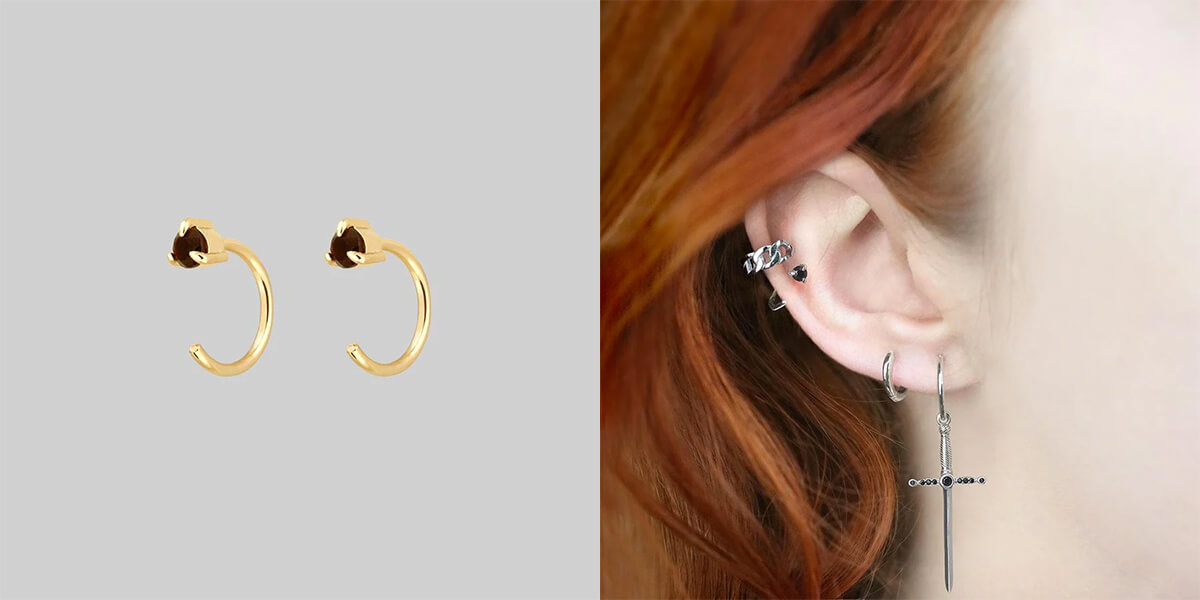 If you're on the hunt for a piece with sleek, organic shapes, check out this Wrapped in Red Ring from artisan Bhavya Jain. The garnet stone draws in the eye, accented by the patina on the sterling silver band, with unique rounded details to make this unlike anything else in your collection. 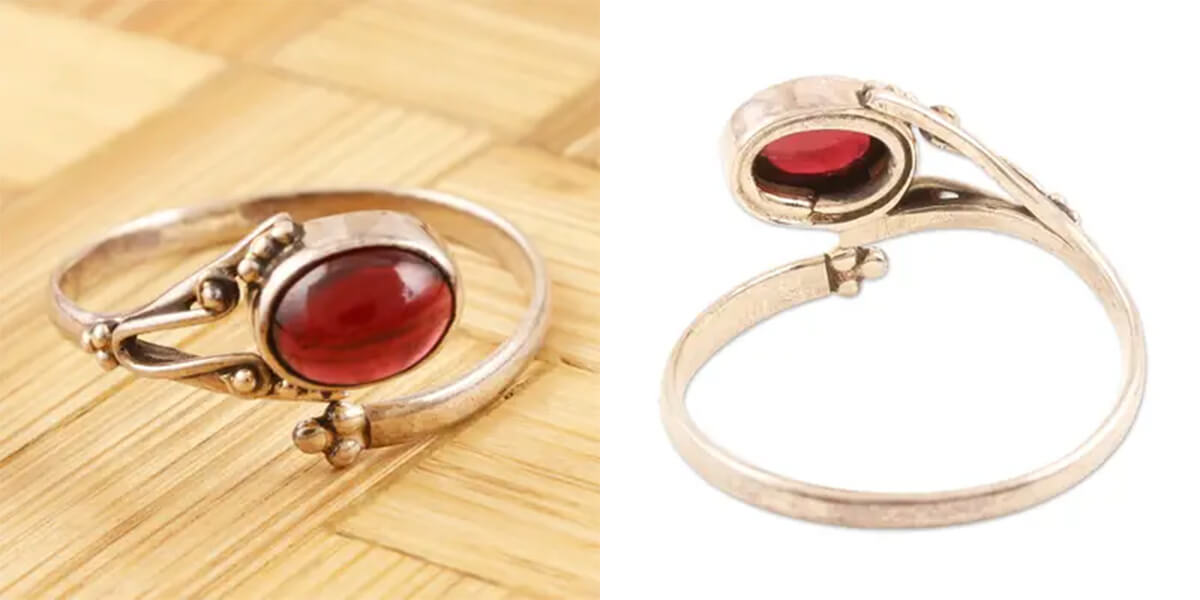 Also read about: The Cutest Sapphire Birthstone Jewelry for Girls With September Birthdays

For a piece that's as stylish as it is practical, this Garnet Stone Necklace Diffuser from Put on Love will do the trick. The dark red garnet stone is striking, while a piece of faux suede on the chain can absorb and diffuse essential oils, whether they're used for aromatherapy or just to smell incredible. 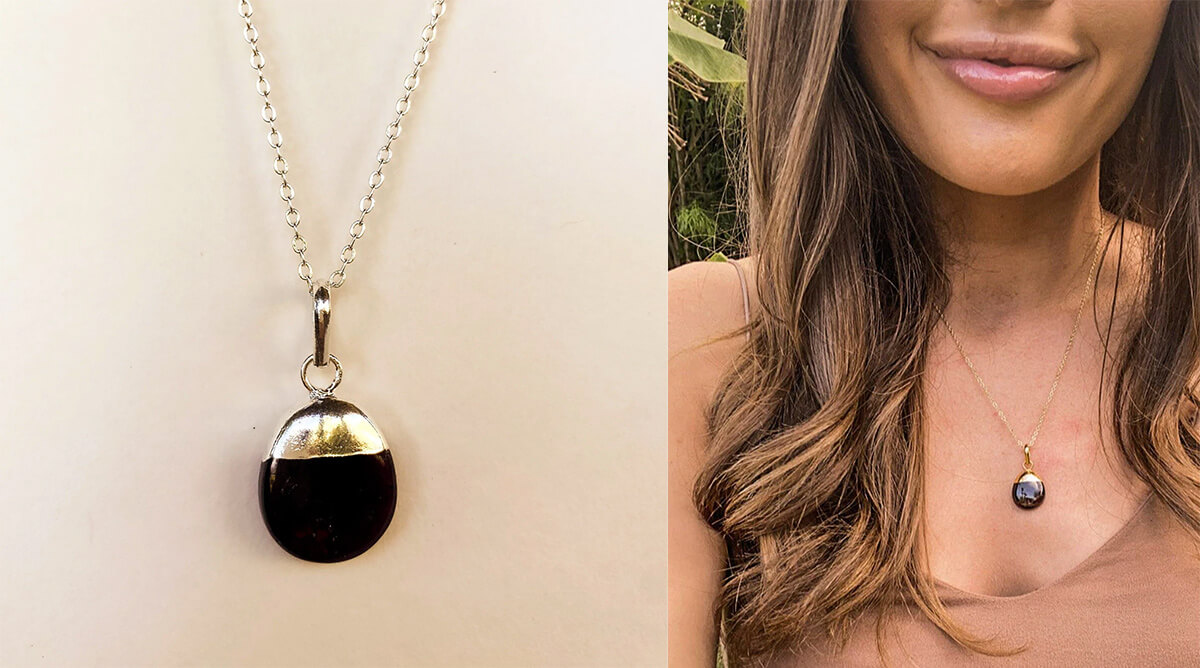 (via Put on Love Designs)

Who said that beautiful stones have to be polished round or cut into perfect facets? This unique Glendale Garnet Bracelet from One Tribe Jewelry shows off the natural raw beauty of the stone with uncut nuggets, wrapped snugly onto a playful golden bangle. 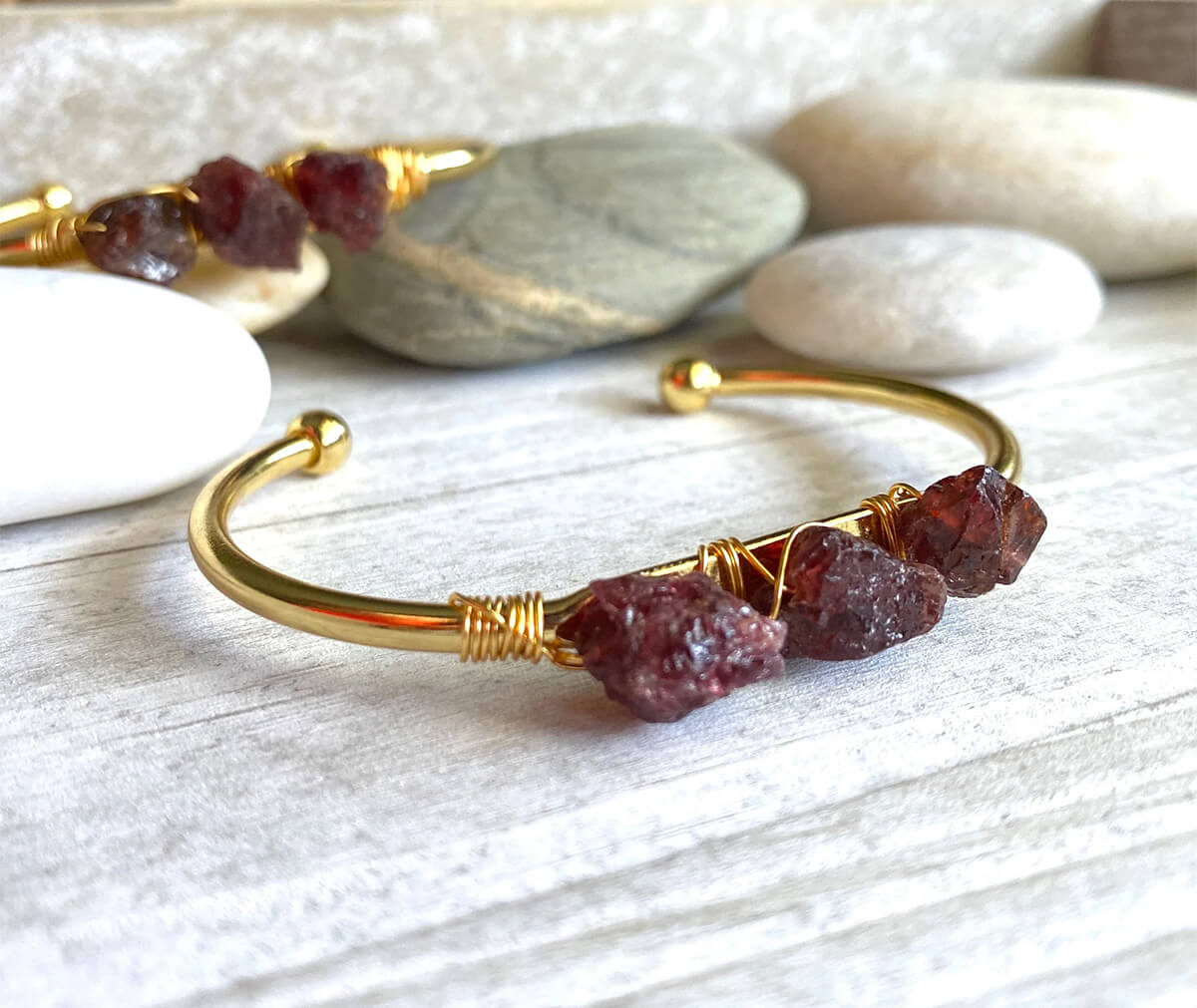 (via One Tribe Jewelry)

Shopping for someone born in December? Click HERE to check out all of our favorite turquoise jewelry for under $100.