17-year-old Cynthia Lam was a finalist in the 2014 Google Science Fair with a project on sustainable electricity generation and water purification in one device. She recently spoke with us about what made her interested in this research and her scientific history! 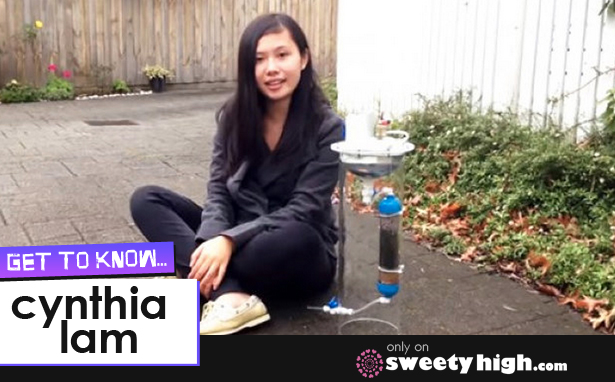 Cynthia Lam has passionate about science for as long as she can remember.

"I had a science kit when I was around 4 or 5 and there was a month I wouldn't leave my house without my little magnifying glass!" she said. "I think the most fascinating thing about science is that you get to put your imaginations into practice and sometimes, a spark of imagination could possibly change the world!"

Cynthia began her first scientific research in February of 2013.

"I wasn't very sure about which topic to choose but I knew that I wanted to do something that could bring benefits to our environment," she said.

She pored over heaps of research papers before finding an area that struck her interest, photocatalysis.

"Instead of just solving one problem, photocatalysis can purify wastewater while producing hydrogen at the same time," she explained. "I started carrying out experiments investigating photocatalytic water purification and hydrogen production, using titania as the photocatalyst and glycerol as the reductant. After months of hard work, my findings successfully demonstrated the optimum conditions for photocatalytic hydrogen generation to take place."

Once her first project was finished, she wanted to take it a step further, creating a device that could purify water and generate electricity with the hydrogen produced in the process. She conducted experiments and designed and created a prototype, with the goal of making a sustainable, affordable and manageable device for users in underdeveloped countries.

"I designed a portable device, H2prO, that aims to purify wastewater and produce hydrogen to generate electricity sustainably through photocatalysis," Cynthia said. "What's great about combining the two 'reactions' together is that the organic pollutant in wastewater does not simply get decomposed but can also act as reductant to increase the rate of hydrogen produced."

Though Cynthia said her design is far from perfect, she's glad it's one step in the right direction to really make a difference in the world. Her work made her a finalist in the 2014 Google Science Fair!

Her next steps are to make the electricity generation unit of her device more practical and cost-effective.

"Although theoretically and even experimentally, it's shown that photocatalysis gives a satisfactory hydrogen yield (which is even higher in the presence of organic pollutants), my aim is to really create a device that can self-sustainably generate electricity," she said. "It's going to be a very exciting challenge which I hope will be supported in the future!"

Cynthia hopes that, once she's finalized a design, H2prO can be used around the world to generate clean drinking water and energy, particularly for people in the places that need it most.

"It would be brilliant if every single person in this world could have a sustainable supply of both clean water and electricity," she said. "Hopefully my design will have the power to provide that! There are still a lot of things that I need to work on in order to increase the yield of electricity generation and to stabilize water purification. I'd definitely love to continue my research after Year 12 and I'd really appreciate any kind of support for that."

A couple of Cynthia's biggest scientific inspirations are women who paved the way for others in the scientific community.

"Rita Levi-Montalcini and Rosalind Franklin's perseverance in science has always been inspiring to me," Cynthia said. "And of course, Albert Einstein! He's the one who inspired me to be 'passionately curious.'"

But Cynthia's first foray into scientific research, particularly with titania photocatalysts, was inspired by a personal friend.

"He made me realize you're never too young to start a research project," she said. "After finishing my first research, I found that curiosity could really lead to new possibilities and nothing is as rewarding as being able to solve a problem yourself."

Cynthia's work doesn't end with her. She hopes that, with some of the buzz around H2prO, she can help others realize the problems that people face around the world.

"I'd like to raise the awareness of the lack of clean water and electricity in underprivileged countries," she said. "It is important to understand that things that we take for granted are what a lot of others are praying for!"

Cynthia Lam's research is extremely promising. We hope to see it in effect someday soon, knocking out two major problems in one fell swoop!

Love science? Become a part of our girls in STEM community at Sweety High and check out more great STEM stories below!