9 Things You Should Know About "Maybe" Singer Daniel Skye

Daniel Skye is a 14-year-old pop singer (and our #MCM pretty much every week) who got his start on Instagram and YouTube and has since developed a dedicated fan base around the world. He recently released the music video for his song "Maybe," and we spoke to the young star to learn all about the track and reveal some surprising facts about Daniel himself.

What's the last song you had stuck in your head?
3. The last song stuck in my head is "Earned It" by The Weeknd.

Which artist got you into playing guitar?
4. I would say young Ed Sheeran and Justin Bieber.

Do you have any secret talents?
5. I'm an expert monopoly player, and I used to be really good at card tricks 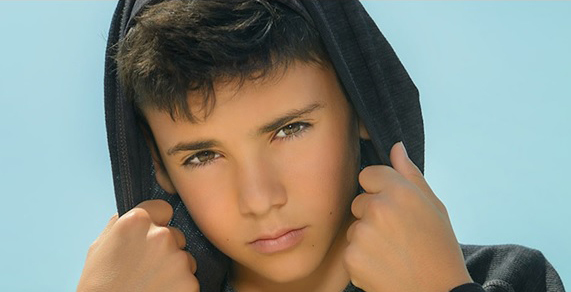 Describe your musical journey so far

I heard a few songs on the radio that inspired me last year, and began singing and taking guitar lessons. I began songwriting and started posting YouTube and Vine videos of me singing regularly. I quickly started to gain followers and the fans inspired me to want to post more. I spontaneously decided to do a show at the mall by my house, and promoted it on Instagram. Unexpectedly, 400 girls showed up and I ended up having to leave through the back exit because it was such a mess. After that, I started playing shows more often and went on a couple of tours in the summer, such as Magcon and Digitour. We traveled the country going from city to city in a big tour bus. It was the best summer of my life.

What was the inspiration behind the song "Maybe"?
I've never had a real girlfriend/relationship, but I think everyone can relate to the issues of having feelings for someone and not being sure what to do about them.

What was the biggest theme behind your "Maybe" music video, and what was it like to film it?
My first ever music video for my song "Maybe" was shot on tour. The video captures some great moments with fans, friends and real experiences from the road. It was a blast shooting it, and half the time I barely noticed the camera was there.

What message do you have for your fans?
My message to my fans is if you have a dream, no matter how far away it seems or how impossible you think it will be to achieve it, go after it. Even though I have a long way to go before accomplishing my dream, I am blessed to have gotten this far. Always remember that anything can happen if you put in the work. None of this would be possible without you guys. Thank you so much for supporting and inspiring me. I hope to meet all of you someday!

Check out the music video for "Maybe" below, and click here to find out Daniel should be your Man Crush Monday EVERY Monday!