Daniela Lee and Sadhika Malladi On GSF and More!

Daniela Lee and Sadhika Malladi were finalists in the 2014 Google Science Fair for their research on non-invasive cancer treatments. In a recent interview, we learned all about their project and much, much more! 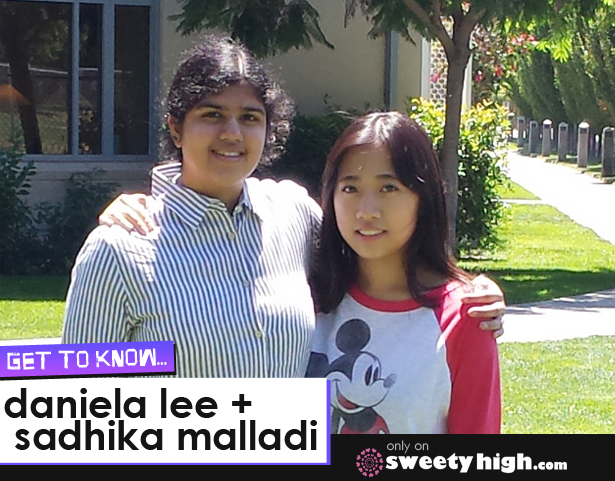 tDaniela Lee first got interested in the sciences in seventh grade, thanks to a science teacher. Since then, she's taken advanced science classes and conducted research as well as volunteered at Techbridge, an organization that teaches science to young girls who go to schools that lack science, technology, engineering and math, or STEM, resources. She's also co-president of her school's WiSTEM club, which promotes women in STEM fields.

Sadhika Malladi's introduction to the sciences took a different route.

"I fell in love with computer science in middle school when I took an elective to try it out and found the critical, strategic thinking behind it intriguing," she explained.

Daniela and Sadhika both attend The Harker School. The two were in a math class together and decided to team up on a project because they shared an instructor named Dr. Rubin, an assistant professor at Stanford University.

Together, they learned about the work of Rubin's post-doctoral fellow, Dr. Daniel Golden, who was soon leaving the lab at Stanford.

Golden's work helped to determine whether patients would respond to treatment using image features in specialized MRI images called DCE-MRI. Using imaging, one could analyze the texture of a tumor by looking at pixel intensities across the image, and using special algorithms, create predictive models predicting how effective treatment might be.

The technique could be used to analyze triple negative breast cancer, or TNBC, the most aggressive of breast cancers.

The two brainstormed with Dr. Rubin on how to expand on Dr. Golden's work. Both  were drawn to the research because of their own experiences.

"Both of us know someone who has had breast cancer and suffered through it," Daniela said.

For Daniela, it was an aunt. Someone very close to Sadhika was also diagnosed with cancer when he was very young.

"I saw firsthand the incredible amount of treatment being administered, and the hit-and-miss nature of the regimen," she said. "While doctors were truly trying their best, each additional treatment took its toll, and he recently passed."

With this optimized treatment, Sadhika hoped to minimize suffering for breast cancer patients and improve their chances at recovery.

Through their research, Daniela and Sadhika contributed by adding more time points and texture features, improving previous results by more than 15 percent.

One of the biggest breakthroughs in their research actually happened by mistake. While working on the code, a portion of one of their image features was deleted, leaving only measurements of size and average pixel intensity.

"Coincidentally, when we tested this model, it proved to work extremely well with Riesz features (another image feature we used), and that's how we got our most robust model right now," they said. "Just goes to show, anything can happen in science!"

The research is promising because the technique can analyze responsiveness to treatment, or progress during a treatment, without surgery. More developed models can help radiologists test aggressive tumors like TNBC. Avoiding surgery relieves emotional and financial burdens from patients, and saves hospitals resources and time.

While women have traditionally been the minorities in STEM fields, Daniela and Sadhika agreed that the divide seems to be shrinking. They both said, at least at their school, that they don't see much of a gender divide among students in STEM. However, Sadhika does see a lack of females in computer science.

"As president of the Programming Club, I am the sole female member interested in the algorithmic complexities behind problem solving," Sadhika said. "I actively work to lessen this gap, and I do think that many programs promoting women in the field are beneficial."

She said that the inclusion of women in computer science is important because it can broaden the base of knowledge in the field.

"The fact that they bring any new perspective is enough to merit their full acceptance," Sadhika explained.

And while Daniela does see that there are a few more men than women in the labs she's worked in, she sees that inequality growing smaller.

"I do think more and more women are entering the sciences, especially because I don't see a clear gap," she said. "For females to be equally represented in the sciences means that everyone gets an equal chance to explore the fields and not be intimidated by a lack of representation."

We hope to see their hard work pay off in the future as their research gets utilized! If you're a girl who loves STEM, join our community at Sweety High, and check out Daniela and Sadhika's acknowledgements and more science stories below!

"We want to give a huge thank you to the Stanford University School of Medicine, Dr. Daniel Rubin, Dr. Adrien Depeursinge, and Dr. Dan Golden for their support and guidance on this project. Dr. Daniel Rubin is an Assistant Professor at Stanford University, while Dr. Adrien Depeursinge is currently working at HES-SO. We also thank our families, both immediate and extended, for the immense support they have given us. In addition, we extend our deepest condolences to those who have lost someone to cancer, including our family, and our support to those currently fighting it," they said.