Dasha Breaks Down Every Track From Her Epic Debut EP, $hiny Things

California-based singer-songwriter Dasha may not yet be a household name, but we think it's only a matter of time before that changes in a big way.

The artist released the soaringly heartbreaking "21st Birthday" earlier this month, and we haven't stopped listening since. It's just one of the six incredible tracks off her debut EP, $hiny Things, which is out today—and we loved the songs so much, we had to know more about them.

Lucky for us, Dasha was willing to go track-by-track with us and reveal the meanings behind these beautiful songs, and how they came to be. 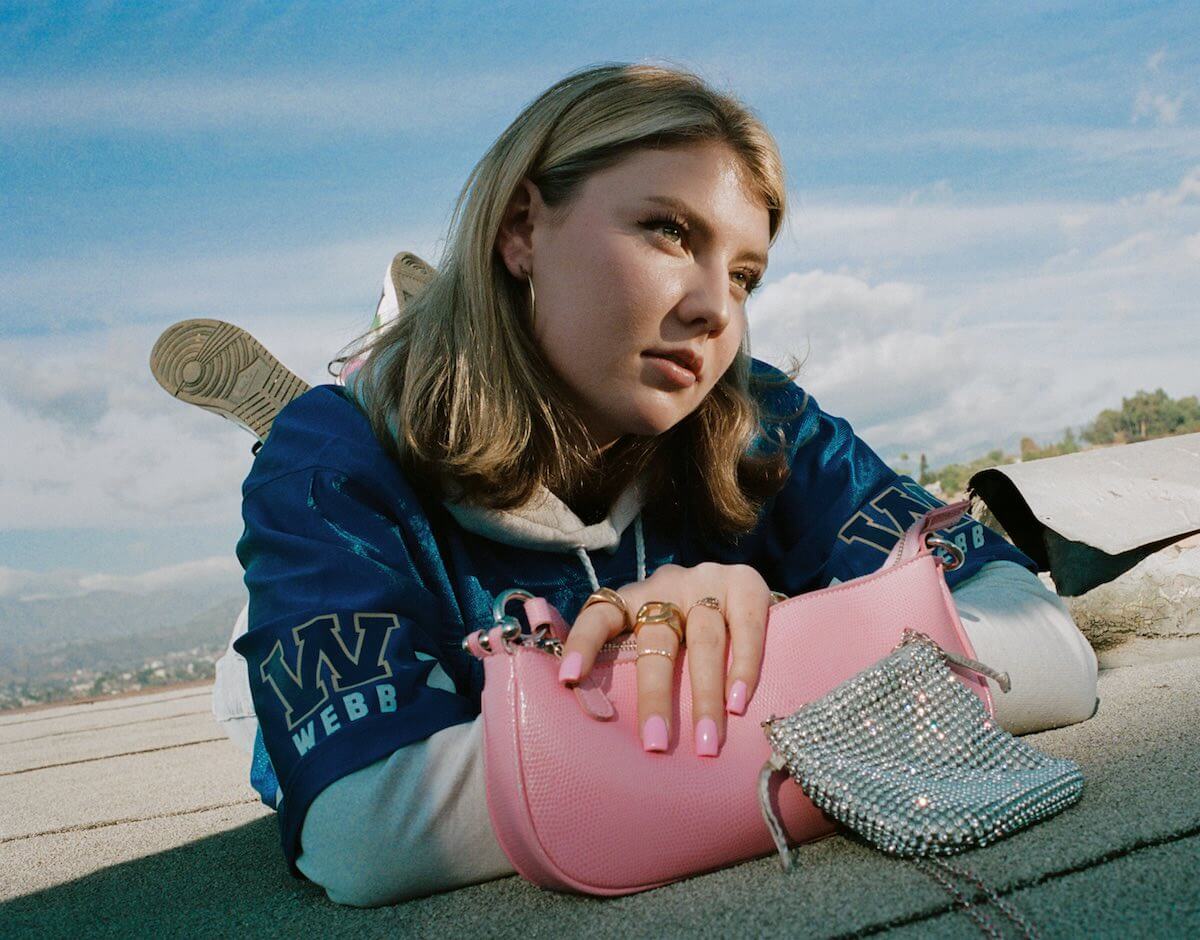 Dasha: "None Of My Business" was written in the first week of quarantine over Zoom with my friend Chelsea [Balan]. I had been talking to this guy for a while and then all of a sudden I saw him all over this other girl I knew. Yeah, we weren't dating but it hit so hard. So I wrote him a diss track. Full disclosure, I have never been cheated on, thank god, but it literally felt like I had been. Sometimes stuff that happens with a guy that you're not actually dating hurts more than with a boyfriend because your feelings are all over the place. I was on an anthem bender when I wrote this—every song I was walking out of sessions with had this upbeat, confident energy.

I wrote the guitar part you hear in the song the night before the session. I came in with the opening line of the song and the melody of "like whoa whoa whoa." The lyric and melody of this track were written very simultaneously. It all came to us so easily. We finished the song in two hours and I made a demo in my bedroom, and then sent it to my friend Elijah Hill [producer]. He hit me back with the track—very, very similarly to what you hear today. It was my favorite song I had written for a hot second.

The lyrics in this song are so sassy, but the breadwinner is in the second chorus with "hope you get tired of her southern accent real quick, and soon you realize that her face is made of plastic." Shoutout to Nashville for that line.

Dasha: Let me tell you, "Better Than She Did" was definitely written about something I was going through at the time. I was so worked up and pissed off, thankfully, for the sake of the song. Long story short, this guy and I were basically dating, then I went back home to California for the summer, he stayed in Tennessee and not one week later, he started dating this girl he went to high school with. I'm so curious if he ever figured out the song was about him, or maybe his new girlfriend figured it out for him.

I brought the lyric and melody of the first verse into the session with me. The opening line of "damn, why'd you have to do me like that" naturally set the tone for the rest of the song to be written around it. Melodies come very naturally to me, so if anything, the lyrics were written around the melodies.

The pre-chorus in "Better Than She Did" is one of my favorites I've written. The combination of the ascending melody with the lyric "Are you bored all alone and you wanted some more chemistry? Is there something you're getting from her that you didn't from me?" sets up the song so well. That's definitely my favorite lyric in the song.

Dasha: I already hate the way this sentence is going to sound, but writing "$hiny Things" was such a vibe. Actually though. It was like 75 degrees outside, and I was on my brother's roof deck in L.A. This song was all about the cadence of the words. I wrote the pre-chorus first just messing around on my guitar. The attitude and rhythm of "pull up in his hoodie that's still dirty from the weekend" set the tone for the rest of the lyrics and melodies.

Later that day, Diego Ferrera [producer] pulled up and we made a demo of the song. I was instantly obsessed. We both sent the demo to our mothers right away, coincidentally, and it's both of their favorite songs so far! The track came together very effortlessly. Very minor changes, besides the lead vocal take, were changed from the demo to the master. My brother, Bardo, hopped on the track in its later stages as well.

My favorite lyric is hands down the pre-chorus, "pull up in his hoodie that's still dirty from the weekend, last night's makeup looking like I made bad decisions."

Dasha: This song—oh my gosh let me just tell you about this song. Strangely enough, this song was also written on a rooftop, but this time in Florida on a writer's retreat in January 2021. I had this concept I'd been hanging onto for a while about putting someone's birthday in your phone the first night you meet them because you knew they'd be around for a while. Julia Paymer and Abigail Orsborn, the songwriting geniuses I wrote it with, took that idea and ran with the melancholic and lonely feeling of being forgotten on your birthday. Serendipitously, my 21st birthday was just over a month away. We finished the song in literally an hour—I'm pretty sure the song wrote itself. The moment we finished the last line, we all felt electric. It was an undeniable feeling. We knew we had written something really, really special. It was so vulnerable and relatable because everyone's gotten ignored by that one person on their birthday.

I immediately called my team and sent them the voice memo and pitched the idea of the quickest turnaround of all time. I wanted to put it out the day before my 21st, so they gave us a single week to record, produce, mix and master the song—and we did it. It just shows that when the passion is there, anything can happen. This song is so real to me, as I was terrified that this one person wasn't going to reach out to me on my 21st. Every line written came from a place of genuine emotion which makes it that much more special.

Okay, so it's hard to pick a favorite lyric, but writing this line literally brought me to tears. "Spinning like I should be in that dress. I'll waste my wish on what I'll never get" takes the gold.

Dasha: Never have I ever written a more therapeutic song. I wasn't even trying to write something I would release in the moment—I genuinely just needed to spit my thoughts onto paper for the sake of my sanity. It was like 2 a.m. and I couldn't stop crying on my bedroom floor. "Make It Work With You" is a song for anyone who has ever been in a "right person, wrong time" type of situation. It's so cruel of the universe or God or whatever you believe in to tease something so beautiful right in front of your face. I've come to learn that there isn't one right person, but there is one right time. This song hurts all over again every time I listen to it.

This track is the most personal on the EP because it's the only one I wrote alone. While I was scribbling down my thoughts, tears blurring the ink, I wasn't focused on making it commercially viable, hence the untraditional second verse. I kinda just went off. I had so much to say. I actually played a voice memo of the song to the guy I wrote it about—scariest moment of my life, but I knew we were hurting in the same way.

My favorite and most honest lyric is in the first verse, "day one we've been matching energies, never let anybody close to me, but you're making all of these thoughts in my head sound like music."

Dasha: Shout out to TikTok for hyping this track up. After writing it with my good friend and now roommate Autumn [Buysse], I don't think I got how special it actually was. I posted a TikTok trying to pitch it to Dixie D'Amelio to cut, but I kept getting comments about how they thought I should release it myself, and soon. So we gave the people what the people wanted! Due to quarantine, I feel like anyone who was in a relationship could relate to this song. It's all about your significant other being boring, which has never been more relatable to so many people. "More Than This" was also written over Zoom—Autumn was sent a loop of the track and showed it to me. I had the rhyme scheme "hang out, make out, take out" in my notes and we ran with it.

Writing this song was so much fun. After it went viral on Tik Tok, I cut the vocals myself in my home studio, sent them to Yuval [producer] then had my brother hop on the final touches of the song. There was so much energy around the song that all the steps to getting to the master felt easy.

I'd have to say my favorite line is "at this rate, I should throw away my crop tops, wear your hoodies cause you say I make them look hot. Are you all I'm ever gonna do?" It's a little sassy, a little sexy, and shows off the cleverness of our songwriting chops.

Love hearing the stories behind your favorite tracks? Click HERE to find out about Stephanie Poetri's new EP, AM:PM.