A Definitive Ranking of The Cheesecake Factory's Most Iconic Cheesecakes

Over here at Sweety High, we like to go above and beyond.

And for us, that meant ranking every single Cheesecake Factory cheesecake on the menu. This trial was no easy feat, so instead, we stuck to ranking the famous chain's most iconic cheesecakes. We've left out the classic plain cheesecakes because, tbh, nothing can touch the original. It just wouldn't be fair.

Scroll below for our list, but beware, cravings lurk around the corner:

Our rating of this slice is in the name—outrageous. While we don't discriminate against original cheesecakes that go beyond ordinary, this dessert has a few too many things going on. With both chocolate cake and brownie bits, chocolate chips, coconut and pecan happening in this slice we can't really pinpoint an anchoring flavor. We don't know who Chris is, but we do know that he must have been having a crazy craving when he whipped up this dessert. 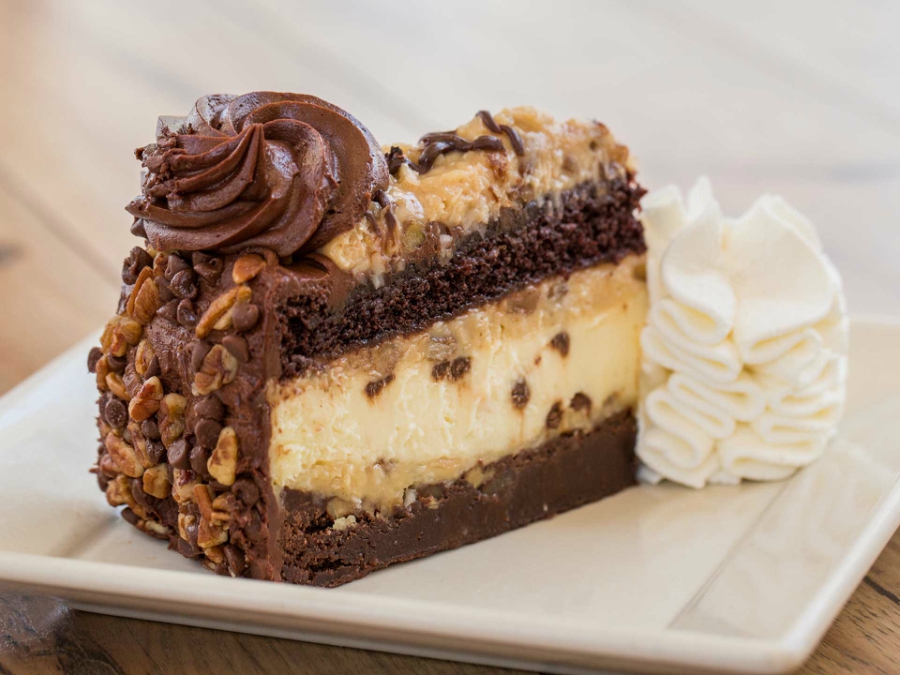 While we can always get behind a good banana cream pie, we aren't so sure we want it mixed in with our cheesecake. This dessert has banana cream filling within the body of the cheesecake and comes topped with Bavarian cream and fresh strawberries. For us, this is too much beige happening in one dessert. You know how bananas can sometimes have that chalky consistency… yeah. These two desserts may be classic, but they certainly aren't complementary. 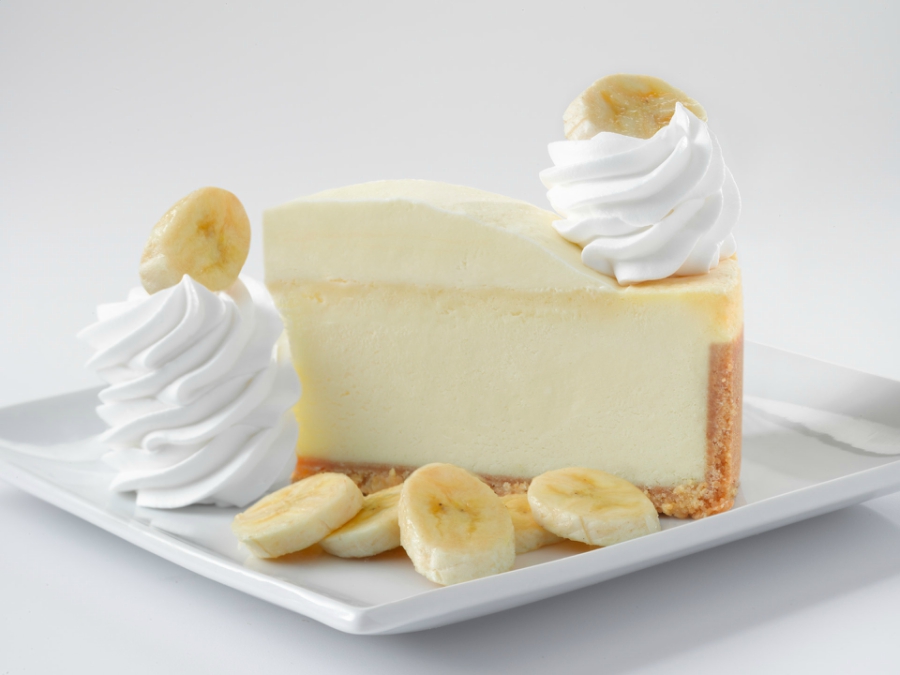 Anyone who watches the Great British Baking Show will truly appreciate the defined layers in this Tuxedo cheesecake. While you can hardly go wrong with chocolate, cream cheese and vanilla, we aren't certain these flavors are for everyone. Mascarpone is whipped into the vanilla mousse, which makes up the top layer of this dessert, and some people simply can't stand this specific taste. That aside, we ranked this cake lower on our list because the "crust" is actually made up of chocolate fudge cake. Sure, we'd order that in a heartbeat, but when it comes to cheesecake, we like a more classic crust rather than cake layer. 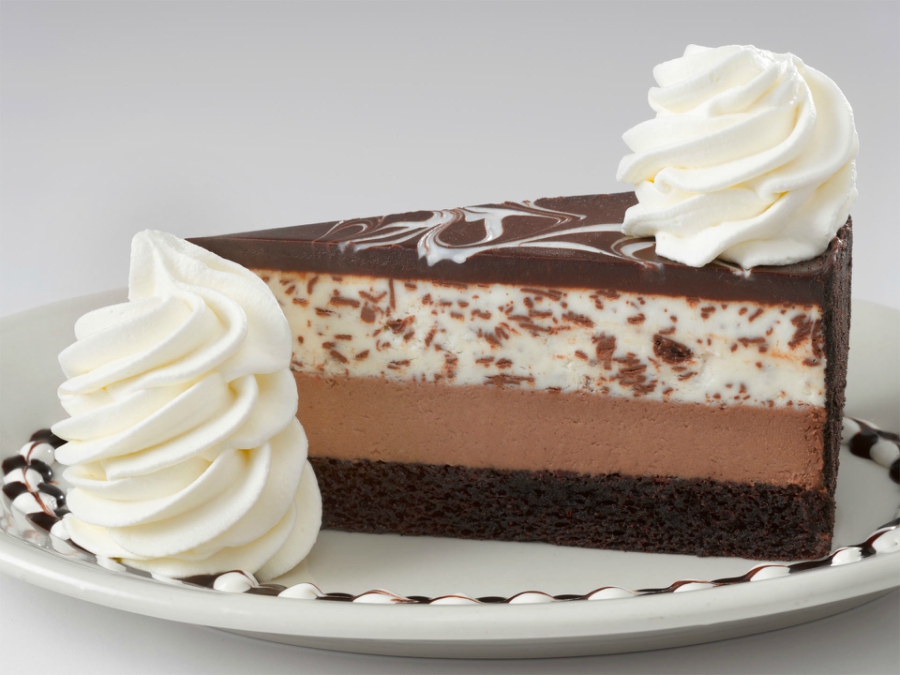 Wowowow, of all the cheesecakes on the list, this one really takes the cake for presentation. You may then be wondering why it didn't rank higher. Well, while anyone who's anyone knows that while chocolate, marshmallow and graham crackers pair beautifully together, it's a bit much going on for a slice of cheesecake. Yes, this is the downfall of Chris all over again. Look, if it were between ordering this slice or having no cheesecake at all, we'd happily order one for now and one for the road. That said, as far as the classic cake is concerned, we're dealing with sweetness overload. 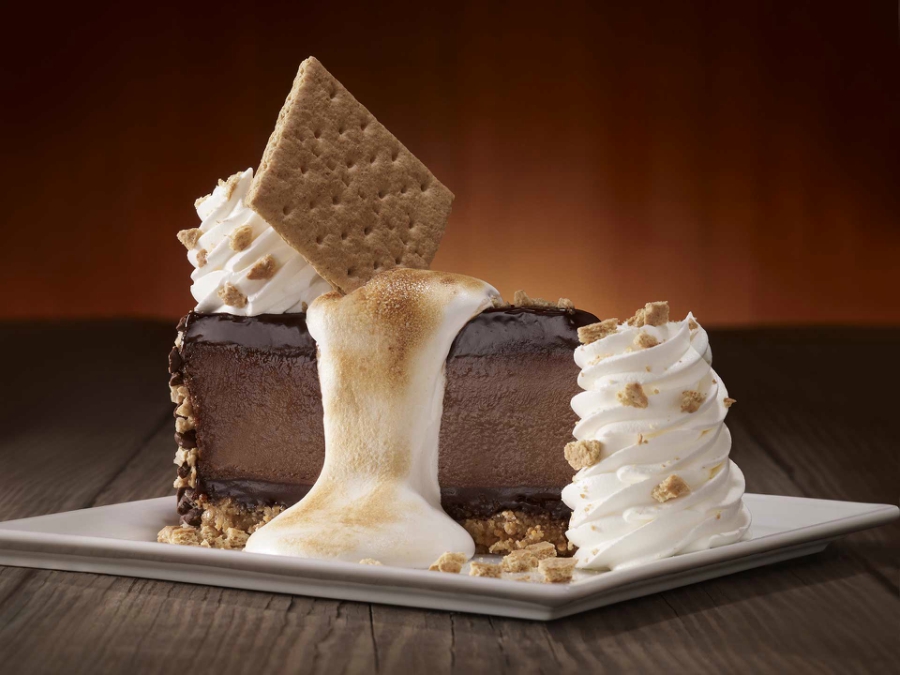 We're almost too ashamed to admit that anything with Oreo in the name ranked outside of the top 3. When in doubt, Oreo is the obvious choice because of the reliable cookie that never gets old. However, we don't feel as though this little cookie fulfilled the promised dream. With thick discs of full-sized cookies baked into the cream cheese filling, we're noticing a majorly disappointing cookie-to-filling-ratio. Had they taken the extreme down a notch and provided instead a classic "Cookies and Cream"-style slice with blitzed Oreos throughout, we'd most definitely be singing a different tune. RIP, Oreo cheesecake. 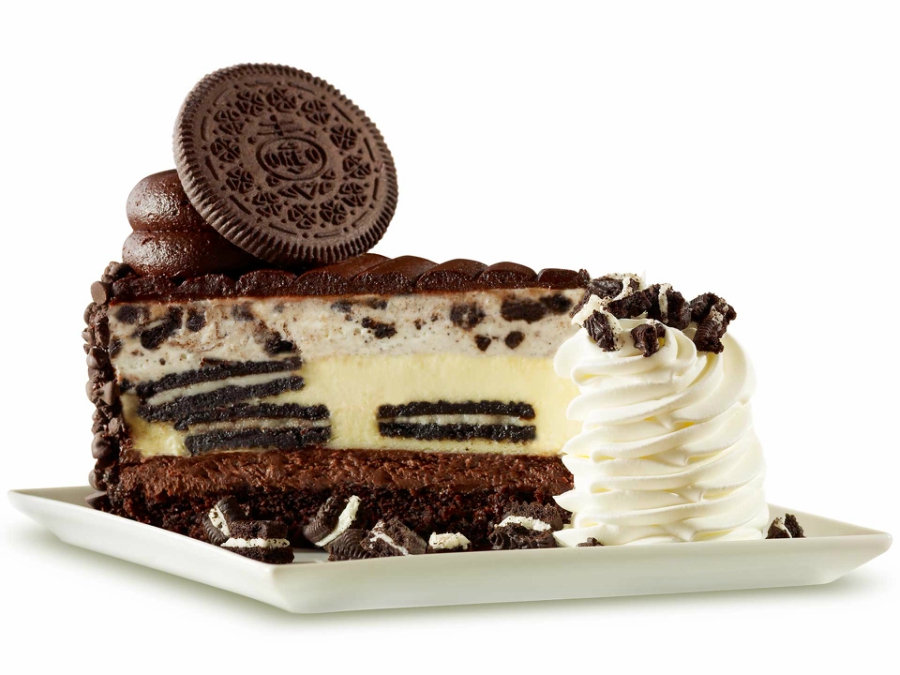 Maybe we're biased because cookie dough happens to be our second favorite thing next to cheesecake, but you just can't go wrong with this pairing. Oh wait, that is unless you throw walnuts into the mix like a crazy person!! Just when this slice was about to come in at No. 1, it had to go and destroy our expectations with this unexpected crunch. But, that said, the chocolate crust provides another nice touch to a signature cheesecake. 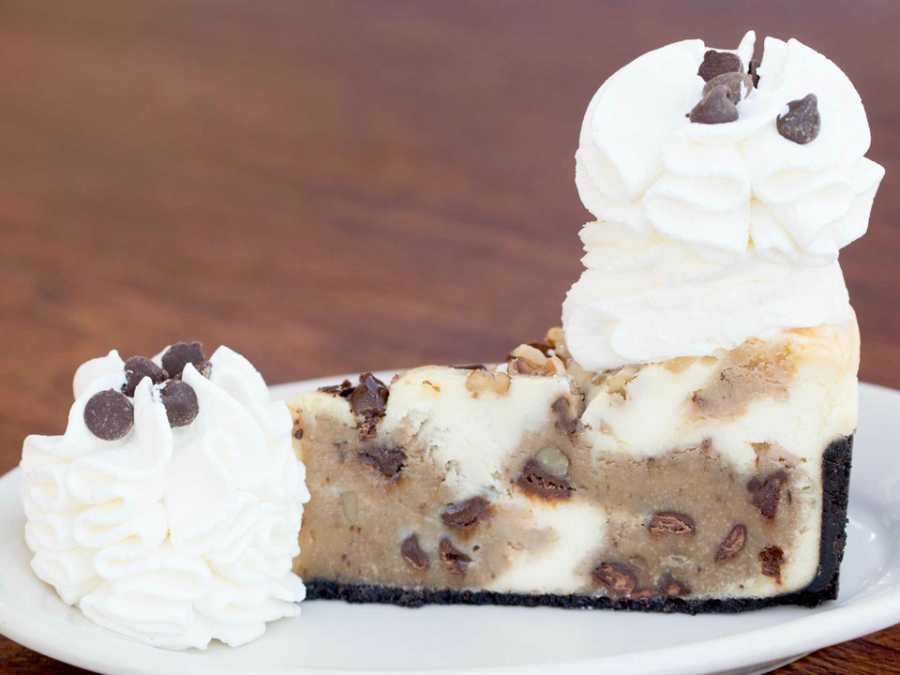 If you're a fan of caramel then this is the only dessert you ever need to know. We're talking caramel-flavored cheesecake topped with a caramel mousse, served on top of a blonde brownie. Oh, did we mention more salted caramel drizzled on top? This cheesecake is situated smack-dab in the middle of our list because while it is a total crowd-pleaser, it may be a tad sweet for lovers of the classic tang of an OG cheesecake. But while haters gon' hate, we're totally going to chow down on this salty sweet dessert. 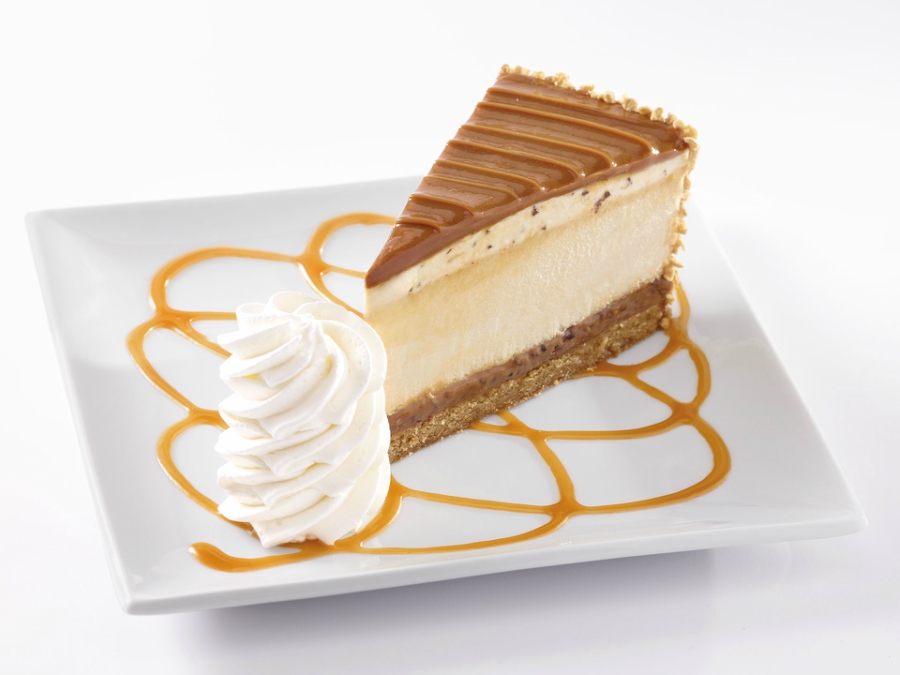 Wow, we seriously thought nothing could be more adorable than your average Funfetti cake, and then this happened. Vanilla cake is sandwiched between creamy cheesecake and colorful layers of strawberry, chocolate and vanilla mousse to make a cheesecake worth celebrating. We're in love with the aesthetic, but beyond that, this dessert is super delish. If we have one tiny complaint, it's that the cheesecake isn't at the forefront of this slice, but rather a component of the larger picture. That said, happy birthday to us. 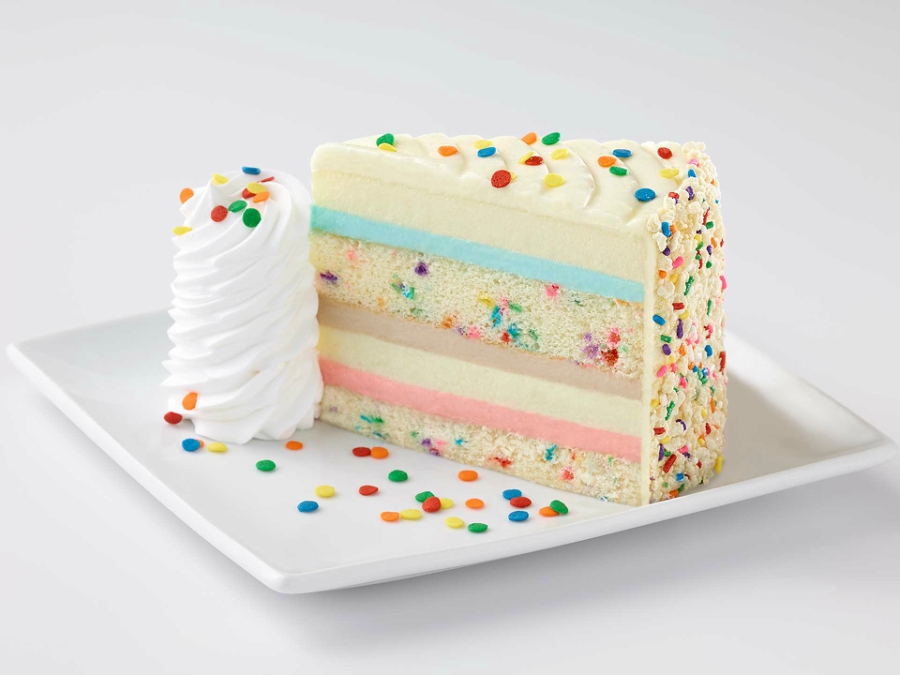 Lemon and raspberry are a classic combination. Few other flavors could be as natural to pair with your cheesecake due to their inner tang. TBH, ordering this slice makes us feel so fancy. We wouldn't be surprised if this is the exact dessert Queen Elizabeth II orders on the side of her piping hot tea. Additionally, the lady fingers in this base is enough to remind us of the "pinkies up" rule while drinking our preferred beverage. But back to the actually taste… yeah, duh it's amazing. 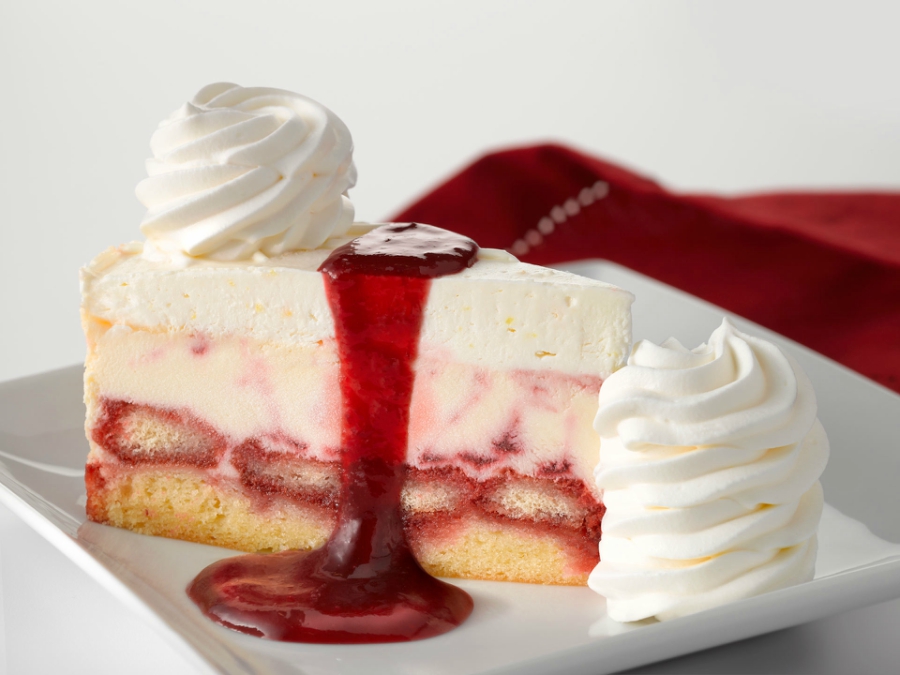 You say chocolate hazelnut, we hear Nutella. While this decadent dessert sounds like it may have a lot going on, these flavors pair so well with each other that you get one concise (and absolutely delicious) taste. The chocolate hazelnut cream cheese filling may be silky smooth, but we're loving the crunch on top. Honestly, this dessert would be at the top if not for one or 10 too many hazelnuts in the mix. 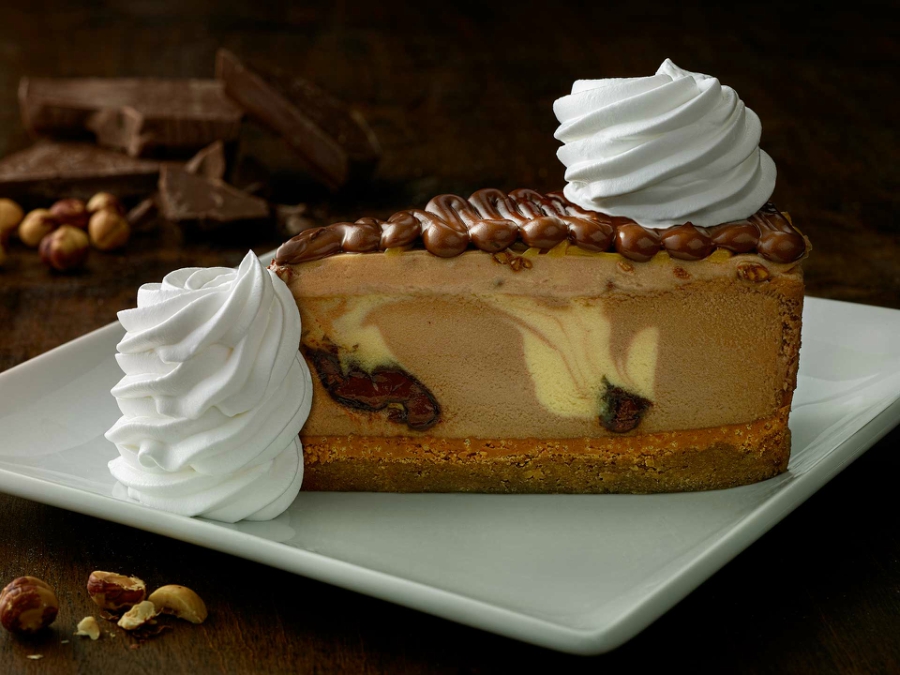 Coffee and chocolate are the peanut butter and jelly of the dessert world. We just can't get enough of the way these rich flavors brew together to make a cake that could be breakfast. Honestly, we couldn't say more about this slice even if we wanted to because our mouths are full and that would just be bad manners. 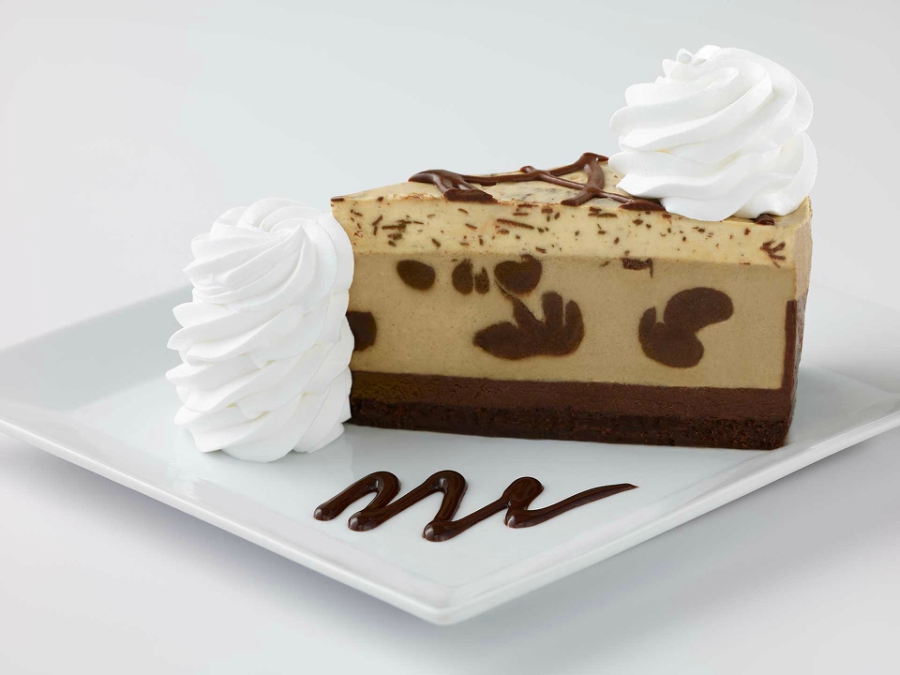 Sometimes it's the simplest flavors that make the biggest impact. This creamy cheesecake filling is marbled with white chocolate and raspberry to produce a sweet and perfectly sour flavor in every bite. Just when you thought this effortless cake was a little lackluster, the chocolate truffle crust takes your taste buds on a whole different journey. This is a reliable slice that we could order again and again without ever tiring, which is more than we can say for some of the uber-complex desserts above. 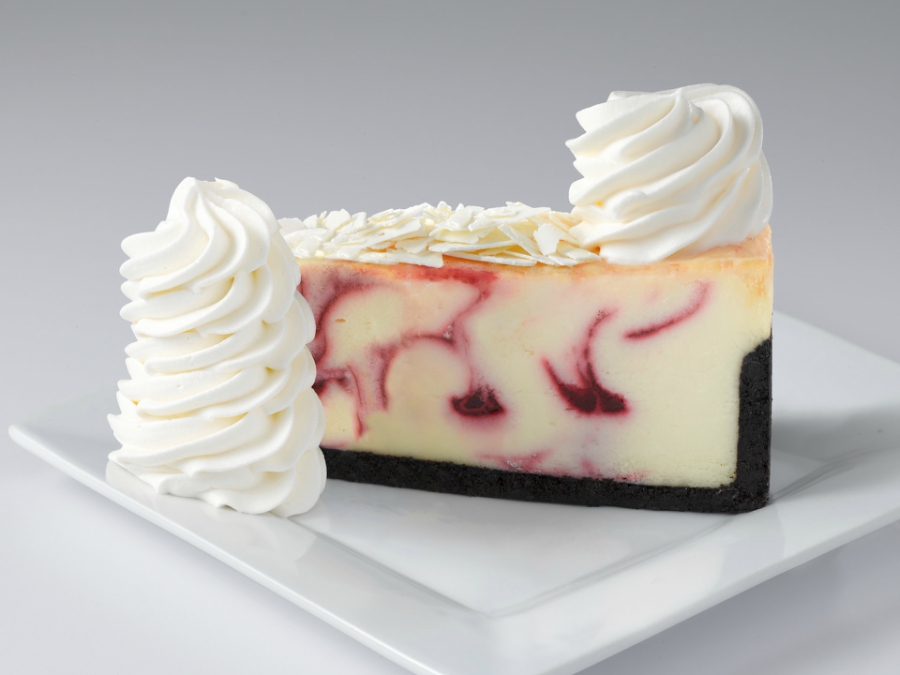 And here it is, folks, our No. 1 rated cheesecake at the famous Cheesecake Factory. It's safe to say that Chris could learn a thing or two when it comes to doing the most in the right way. While this dessert is basically like a Frankenstein-ed version of your leftover Halloween candy, with Butterfingers and Reese's cups swirling together with more caramel and chocolate, it somehow works. The sharp cheesecake cuts through the rich chocolate and sweet caramel in an invention that's so crazy it just might work. And work it does, my friends. Work ???? It ???? Does ????. 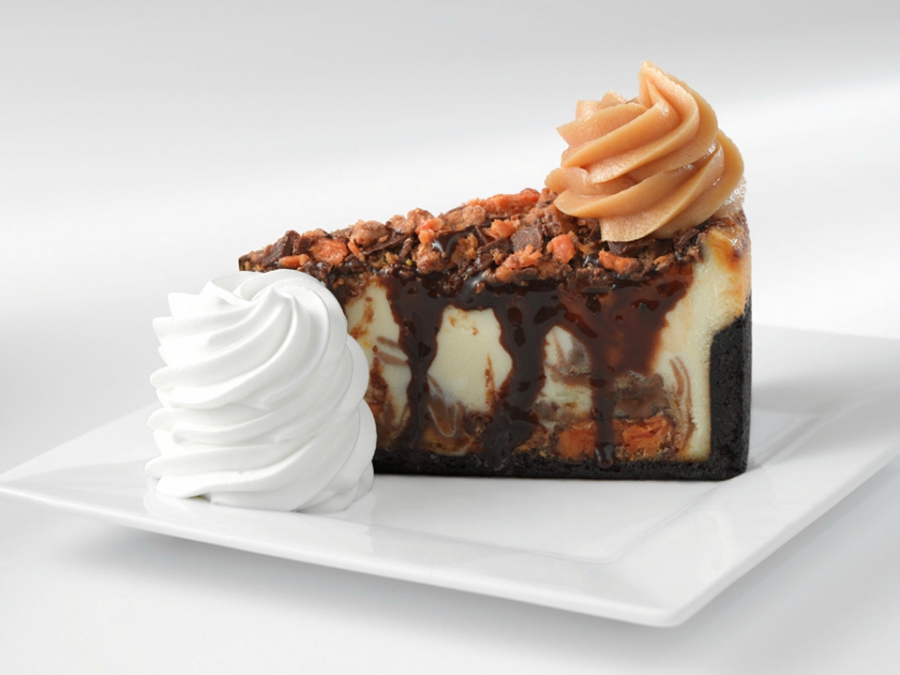 If savory is more up your alley, then click HERE to find out which Del Taco menu item you're most like based on your zodiac sign.