Devin Logan: What Girl Power Means To Me

The sport that I'm in, freestyle skiing, is mostly a male-dominated sport, so to me, girl power is about getting a group together and going out skiing and progressing our sport, whether it's learning a new trick or just trying to have fun. That's what's great about skiing with other girls. We really push each other to learn new tricks and always get better. 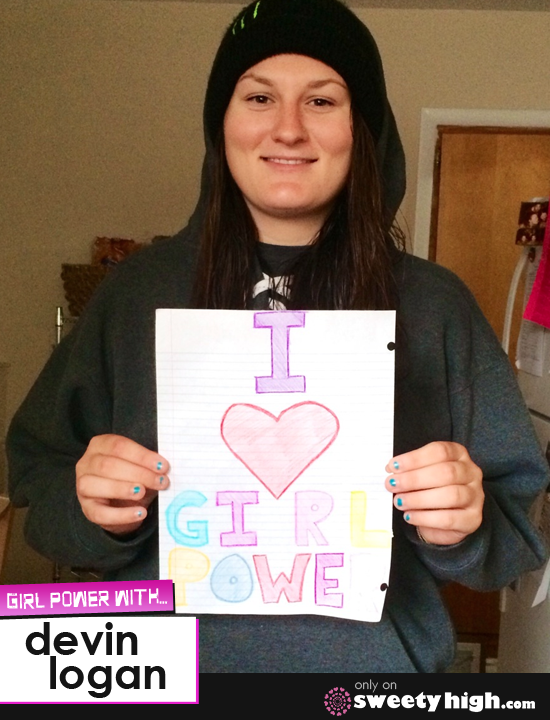 When I think of girl power, the first image that comes to my head is a group of girls going out and having the most fun ever, and just showing boys what's up. There's always a need for girls to be reminded how powerful they are. Especially because so many sports are dominated by males. I even saw that with skiing. We fought hard to have the same rights as the boys. That's girl power to me.

All of us came together and really fought for what we wanted. We do the same thing as the boys, and we deserve the recognition they get. I recently did some filming in the park for an all-girl movie called Pretty Faces. It's Lynsey Dyer's new all-girls ski video, and it's about the fact there's more behind us than just a pretty face. We can do hardcore tricks and land on our feet and look going doing it!

Sarah Burke is also one of my girl power icons. She got freestyle skiing where it is today. Before her, girls weren't even allowed to do competitions. She would compete against the guys and showed them she could do anything they could. She led to girls getting into the X Games, and also fought for girls to have equal rights as the boys in all of our competitions, with equal pay and the chance to ski the same courses as guys do. She definitely made women's free skiing what it is today. I wouldn't be where I am today without her.

I grew up skiing with boys, so I had to always be powerful and stand up to them because it was such a male dominated sport. But I can do anything the boys can do. As a girl I might even be able to do it better, and look even better doing it, that's for sure! Anyone is capable of anything. If you just work hard at it and put time and commitment in, anything is possible.

Devin Logan is an American freeskier from West Dover, Vermont. At the 2014 Winter Olympics in Sochi, she took home the silver medal in the first-ever Olympic slopestyle skiing competition!