When I first stumbled across an ad for Diamond Art Club, I was immediately intrigued.

The process is a little bit like paint by numbers, except that instead of using paint, you place thousands upon thousands of tiny plastic pieces to create your masterpiece on the canvas. I saved the ad I saw, bookmarking it as a reminder for later, and coincidentally, not long after that, was contacted by a rep promoting the brand.

The timing was perfect, and I agreed to review the entire Diamond Art Club process. They sent me their "Fall Time" set (retailing for $24.99), and I got to creating my work of art.

Diamond Art Club kits come with everything you need to make your work of art come to life. Firstly, there's the canvas, which doesn't just include the grid showing you where to lay each and every diamond, but also a handy color guide so you can match your numbered bags of diamonds to the symbols that represent each shade. I was a bit surprised at how thick and sturdy the canvas was, and it was covered by a thin plastic sheet to protect the adhesive until it was time to get sticking.  This one was a full drill canvas, meaning that at the end of the process, the entire canvas is covered in diamonds, creating a mosaic effect. Overall, it was 16.5 inches by 20.9 inches—meaning I had a lot of diamond placing ahead of me. 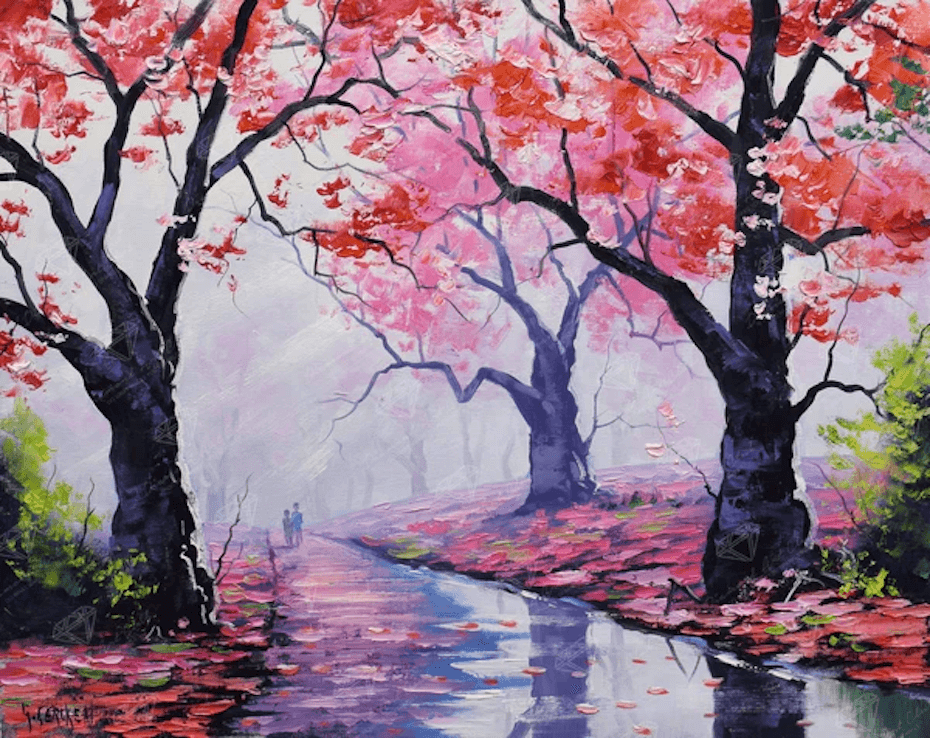 Speaking of diamonds, this kit contains literally tens of thousands of them in 28 different colors. They're shaped like little squares, and are flat on the side you place, and faceted on the other side, so they sparkle in the light. Prone to losing small pieces? Don't worry—Diamond Art Club provides plenty of extras in case pieces go misplaced.

But you'll need more than just the canvas and the diamonds to make your diamond art. There's also a tray for easy grabbing, the applicator and grip, a multi-placer head, two heart-shaped wax pieces, 18 plastic bags for storing extra diamonds and a pair of very thin tweezers for fixing mistakes. Once you've opened the box up and made sure everything's there, you're ready to start placing. 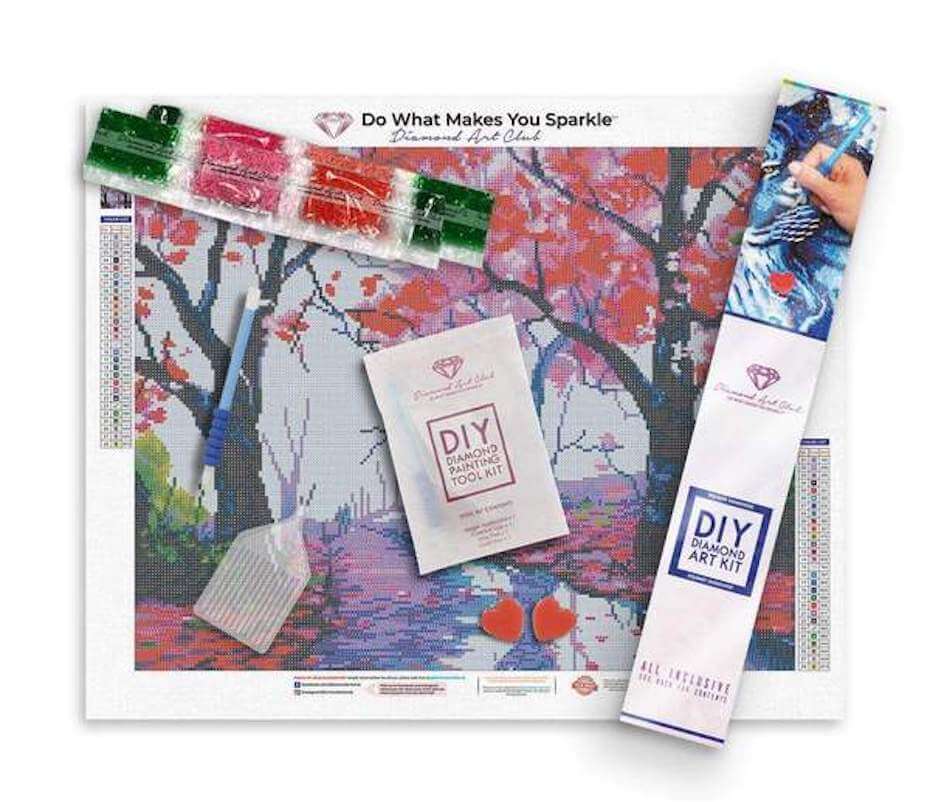 I decided to start with the white diamonds, because they were the most plentiful by far. I ripped open the first of four bags of white diamonds, poured some into the tray, and gave it a shake until most of the diamonds were right-side-up, with the glimmering, faceted side facing me. I stuck the applicator into the wax, so that some of the red wax got stuck in the tip for lifting, peeled away a corner of the protective plastic, and started sticking diamonds onto the adhesive of the painting where the symbol told me to.

At first, it was a slow going. I didn't really have any existing diamonds to guide me, and positioning myself so that I would accidentally stick my hand or elbow in the open adhesive was tricky. However, I found the process very absorbing, so I wasn't thinking or worrying about much else, and the time absolutely flew as the diamonds went down. Over time, I got faster and learned more tricks. For example, I find it much easier to place diamonds next to existing ones, so I started applying them in a checkerboard pattern, so I could be careful with half of the diamonds, and then speedy with the others. I also gave the multi-placer a try, but found that I preferred only placing one at a time for the whole process. 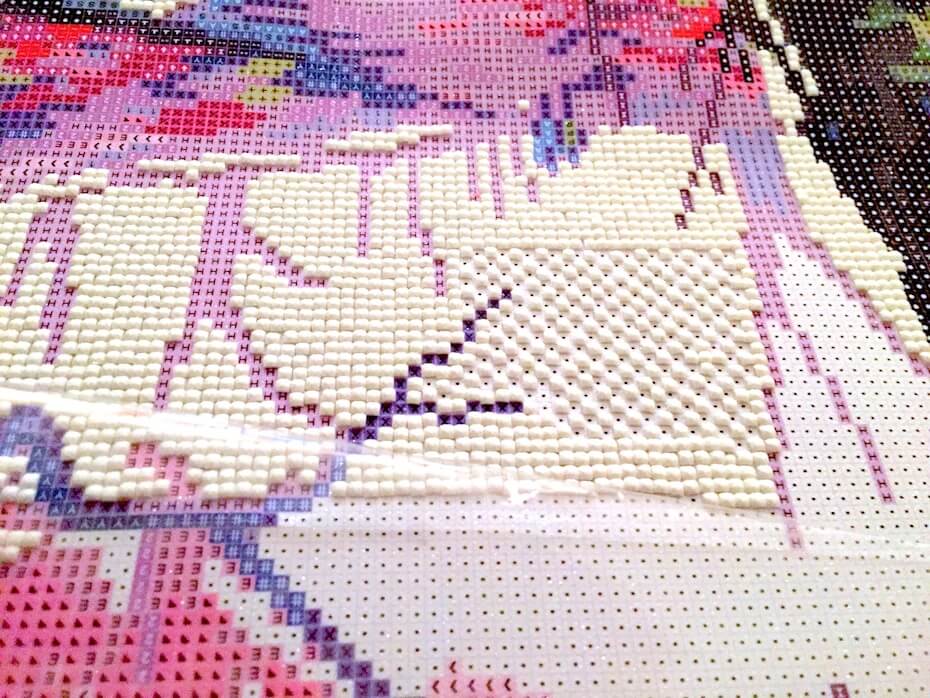 It became clear early on that this process would take a long time, but I didn't mind it too much. With the pandemic going on, I loved being able to dedicate time to something puzzley as well as creative. It was engaging, and yet incredibly relaxing, allowing me to tune out my surroundings for hours at a time. I also found that when I worked on the Diamond Art Club painting before bed instead of browsing on my phone for an hour, I fell asleep so much more easily, and this quickly became my nighttime routine.

It took me three-night sessions to get done with the white, but by the time I was done with it, I was feeling pretty accomplished and ready to tackle the next biggest color on the board—black. I stored the extra white diamonds away in one of the provided plastic bags, and moved on to the next color. There were about half of the black diamonds as there were of the white, and yet placing them seemed to only take a small fraction of the time the white had, given what I'd learned earlier in the process and the fact I now had more diamonds on the board to guide me.

When I moved on to the other colors, I was surprised at how much variation there was between the shades, with multiple hues of pink, red and purple bringing out different aspects of the painting. At this point, I started cutting out the numbers from the bags the diamonds came in and storing them inside of the plastic baggies, along with extra diamonds, for later identification. No matter how thorough you think you're being with your Diamond Art Club masterpiece, chances are you're going to need to go back at some point to fill in the gaps you've missed.  I'd also like to point out that they included 18 plastic bags, but 28 colors, meaning there were some that needed to double up. When it came to combining colors, I made sure to mix very unlike colors so that they would be easy to identify.

And when each of these colors came in, the painting really started to take shape and come alive. The more I completed, the prouder I was of it, and the more satisfied I was with the entire process. With these colors close together, I could see the subtle differences in the shades, and it really made the work of art pop. Plus, there were some fun moments hidden in the color-coded symbols themselves. 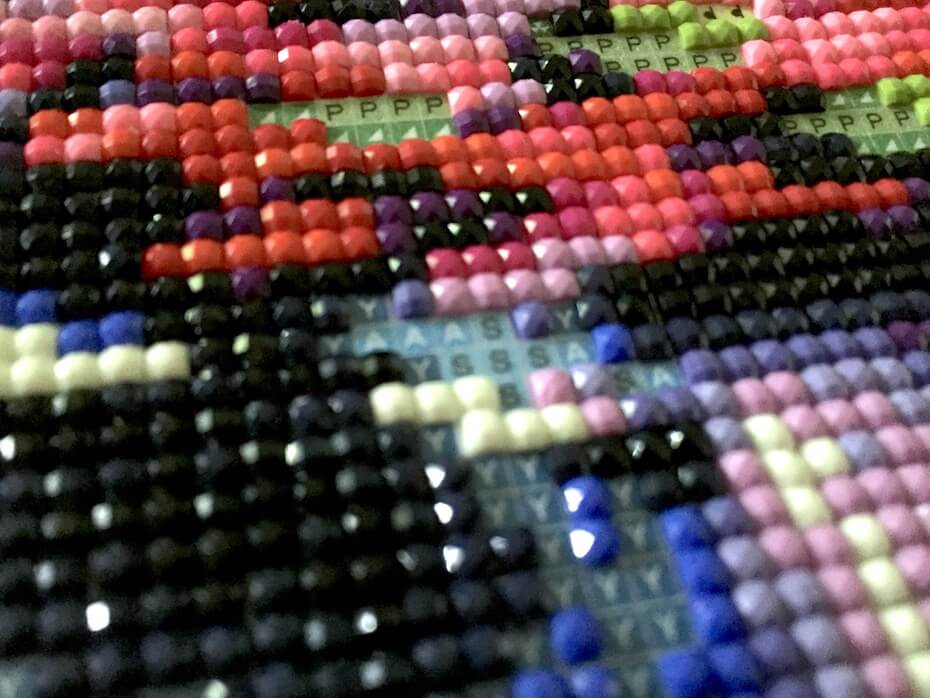 Then, finally, after working on the art for at least an hour every day—and at points, working on four or five-hour sections—I finally completed it after about two weeks. I was delighted with the final product, and it's now hanging proudly on the wall beside by my bed. Diamond Art Club certainly isn't an undertaking for those who aren't willing to commit themselves, but if you're looking for a hobby that will take some time and give you incredible results, I think you'll find that it was absolutely worth it—and it's an experience I'd love to reproduce in the future.

At the end, chances are that you'll also be left with thousands of extra diamonds. Rather than throwing them away and putting a bunch of plastic in a landfill, I recommend getting some paper and some glue and making some pixel art with it. This is just the first of the creations I've made, and I'm looking forward to creating even more. 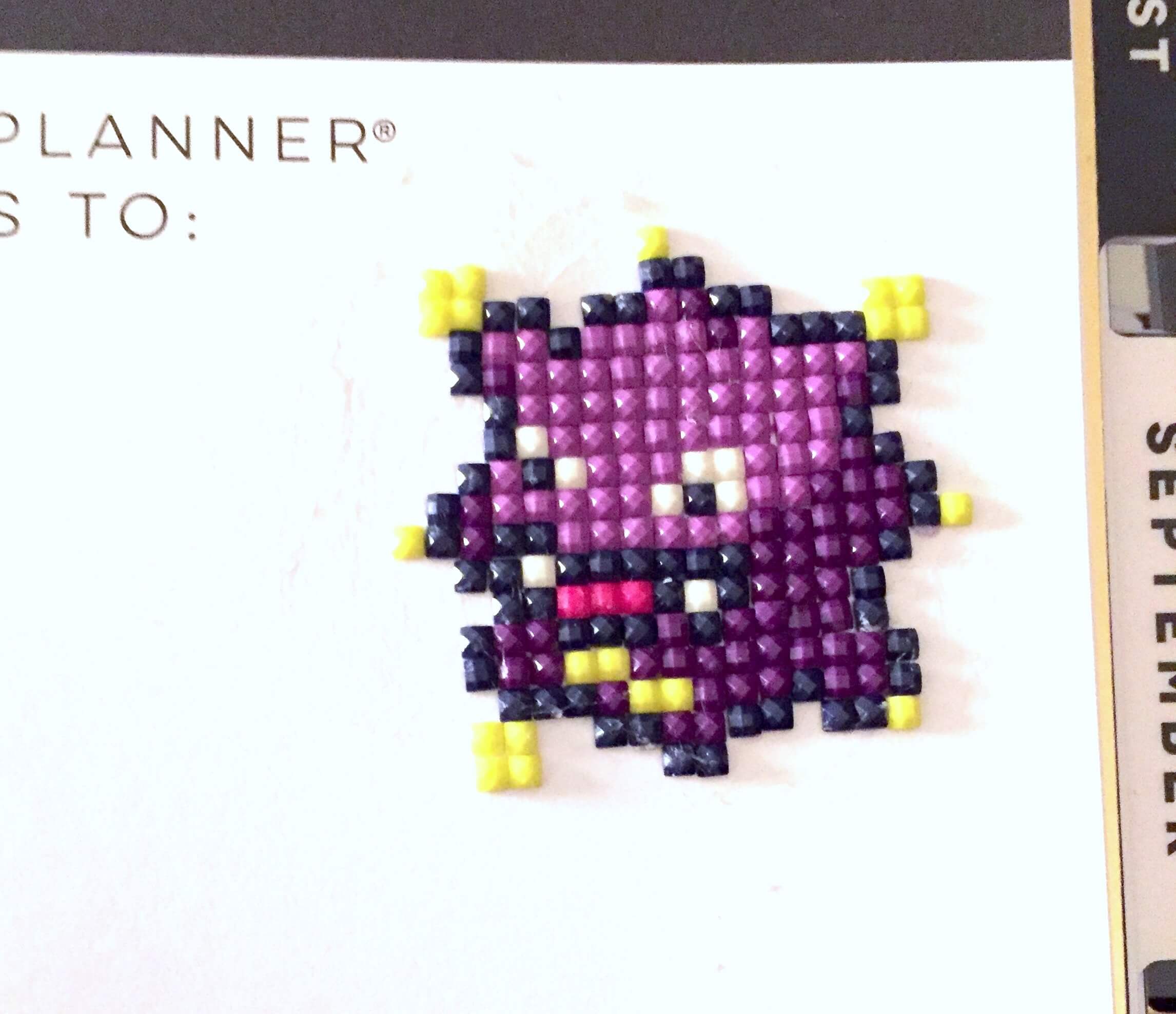 Love to make art? Click HERE for some creative captions to show off your works.