Dig Dog for the Nintendo Switch Looks Simple, But the $4 Game Has Surprising Depth

When I reached out to the creator of Dig Dog with the intent of potentially reviewing the game's new port on the Nintendo Switch, I thought it looked like a cute, simple time-waster. I was provided with a review key and—forgive the pun—I quickly found out it was so much deeper than that.

First, I discovered the incredible manner in which developer Rusty Moyher made the game. Second, there was a lot more to it than I ever expected, based on its basic pixel art and straightforward premise.

The Making Of the Game

While many games are embracing a simple, retro-pixelated aesthetic, there's a really good reason Dig Dog looks the way it does. Due to a repetitive stress injury that makes it difficult to use a keyboard and mouse for an extended period of time, developer Rusty Moyher programmed and drew the entire game without using his hands. Making a game this way required unique workarounds, and he used voice recognition software and a microphone—plus his own super quick improvised vocab set—to create the entire game. When it came to creating the art assets, he used a combination of a hat with a built-in reflector and an infrared camera to draw each delightfully pixelated character. With that in mind, I was even more impressed with the game that was soon to come.

On the surface, Dig Dog couldn't be a simpler game. The player takes control of a dog whose only goal is to get to the bone buried somewhere in each level. That sounds super straightforward, but a lot goes into complicating that premise—and making it a lot more fun to play. 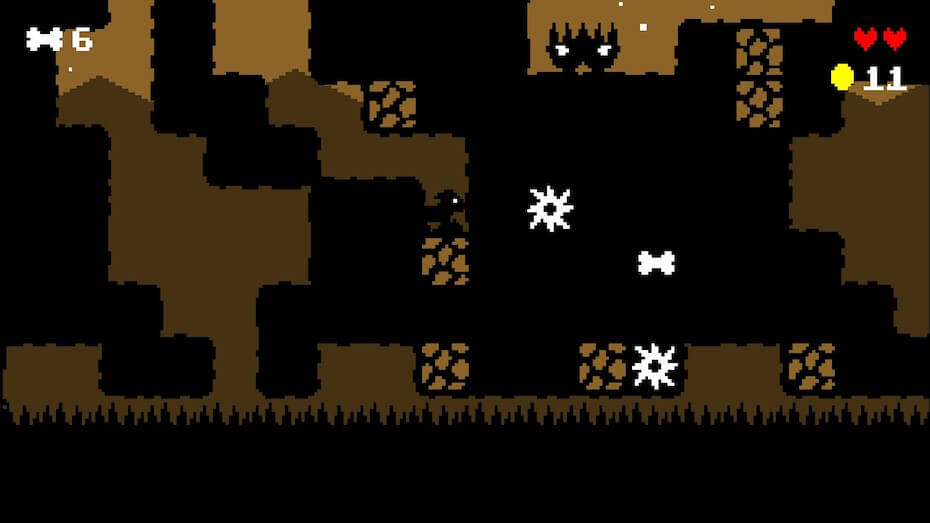 The controls are also easy and to the point. You can dig left, right or downward on soft dirt tiles with the directional buttons, jump with one button press, and then dash by pressing that jump button again. There's also a button that makes the dog bark, but it's (mostly) just for fun. Of course, it's what you do with those abilities that counts.

No two runs of Dig Dog are ever the same because it's procedurally generated, giving you wonderful new random levels every time. The game is also roguelike, meaning when you die, you'll lose all of the progress you've made up to that point. The dog only has two hearts to lose, so unless you can recover a heart along the way, it's two hits, and you are done. Land in a well-placed pit of spikes, and your end will run, regardless of how much health you have. Once you get to the bone at the bottom of each level, the dog flies into the air and finds itself at the top of the next.

At first, the enemies aren't too much to worry about. Slow-moving round enemies crawl back and forth across their platforms, and bats fly across the screen, but can't pass through solid walls. But that doesn't last for too long, and the challenge ramps up with every bone you collect. If you're going to make any kind of progress, you have to learn their behavior—and their weaknesses. Spiky-headed enemies can only be killed with a sideways dash, as their horns are quite deadly. When you get to a new area, complete with a different color palette and new background music, the types of enemies also evolve. 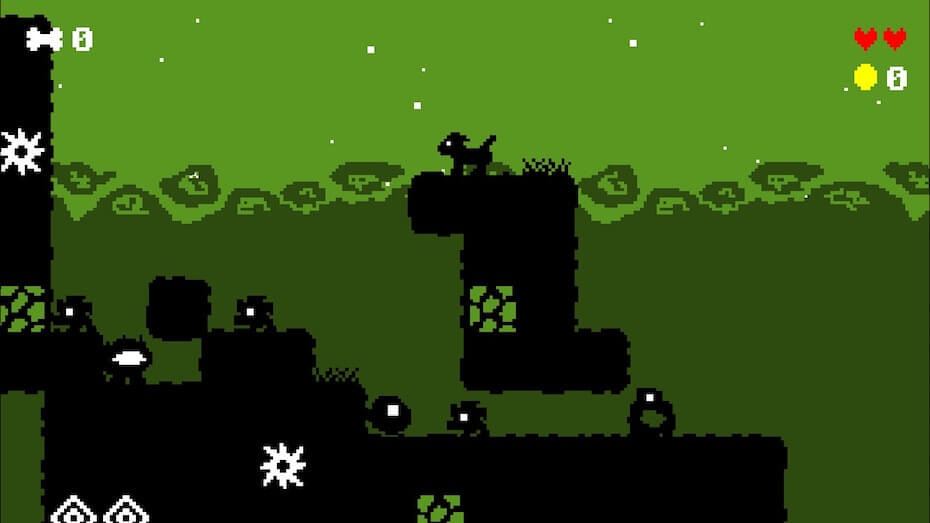 The final mountain area, for example, is a minefield of baddies, with an appropriately ominous red and black color scheme. Small star-shaped enemies will pursue you with zeal, so unless you're really fast, it's usually wise to take out each and every one as you make your way downward. These levels feel more structured than the others, guiding you down corridors of stone that can only be broken by enemy attacks until the real digging begins. 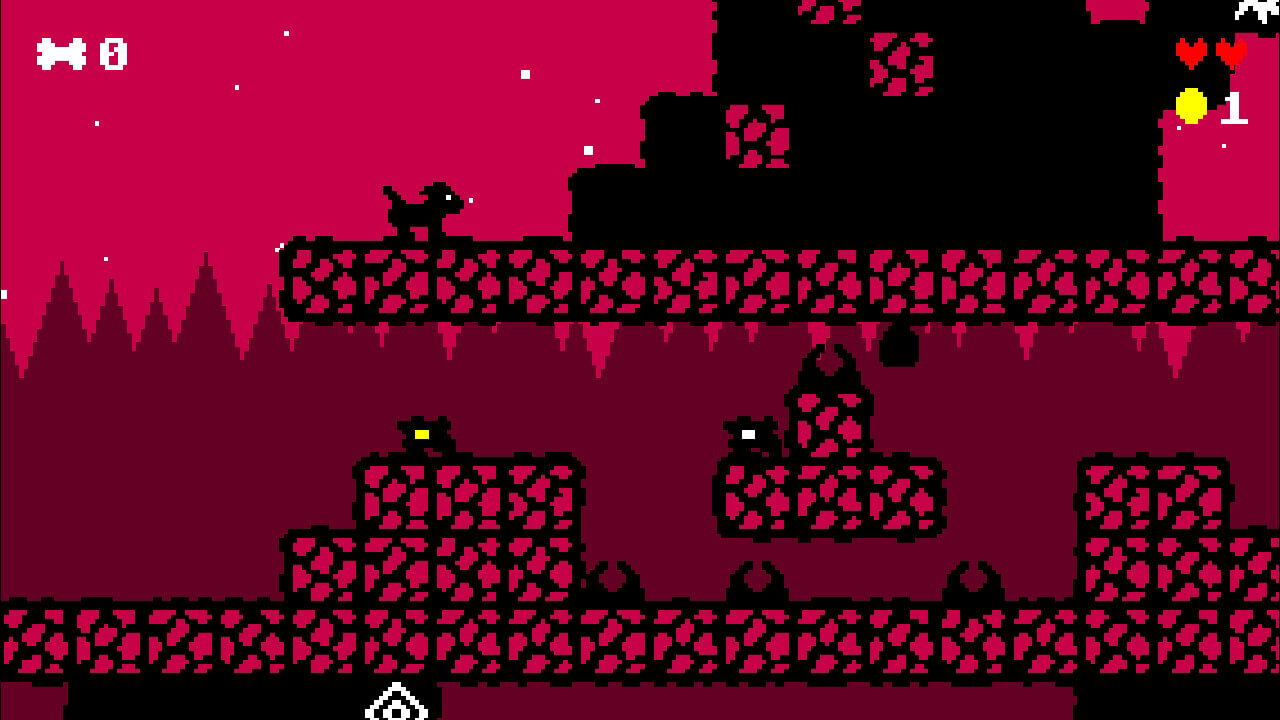 Every enemy has its own distinctive silhouette that can help clue you into how it will act, but the color can also guide the way you play. Each one has an eye or other detail that helps it stand out against the backgrounds. For the most part, these details are white, but occasionally they'll be yellow, and very rarely, they'll be red. It's often worth pursuing these yellow-eyed enemies, because they contain valuable coins, but even more coveted are the extra hearts stowed inside enemies with red eyes. 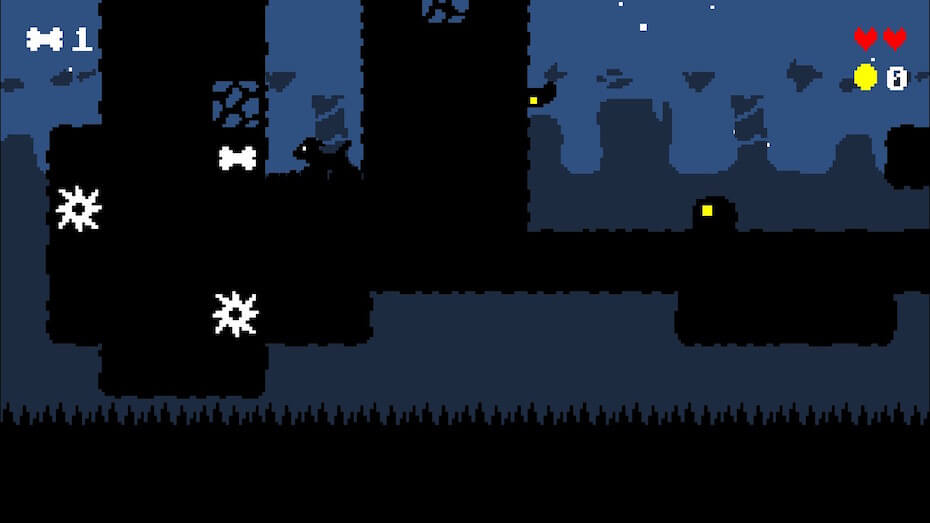 If you're struggling to get far, coins can be a lifesaver. Certain levels contain little shops where you can exchange them for power-ups to help you on your journey. Maybe you'll spend your coins on a heart refill, an ability that lets you grab ledges, or a more powerful jump. I still haven't tried them all (and some of the ones I have tried I haven't quite figured out) but they can definitely come in handy in a pinch. 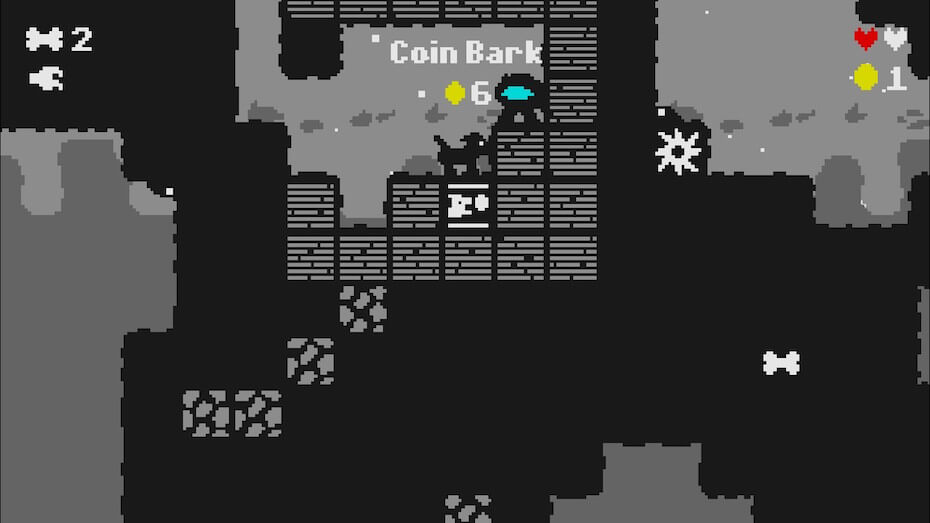 And digging directly isn't the only way to get around. By dashing, you can move quickly through dirt blocks. Digging into the saw shapes that appear will send out a large buzzsaw that destroys blocks—as well as hurting the dog—though you can use them to take enemies out with you in a pinch. You can even lure enemies to activate the saws and destroy themselves with careful planning. Similar diamond-shaped tiles will destroy a number of dirt blocks at once, though using them without caution can get the player into some tricky situations.  If you're not careful, it's possible to dig your way to trouble you can't rise back out of, and the very bottom of every level is coated in sharp spiked that will immediately end your run. 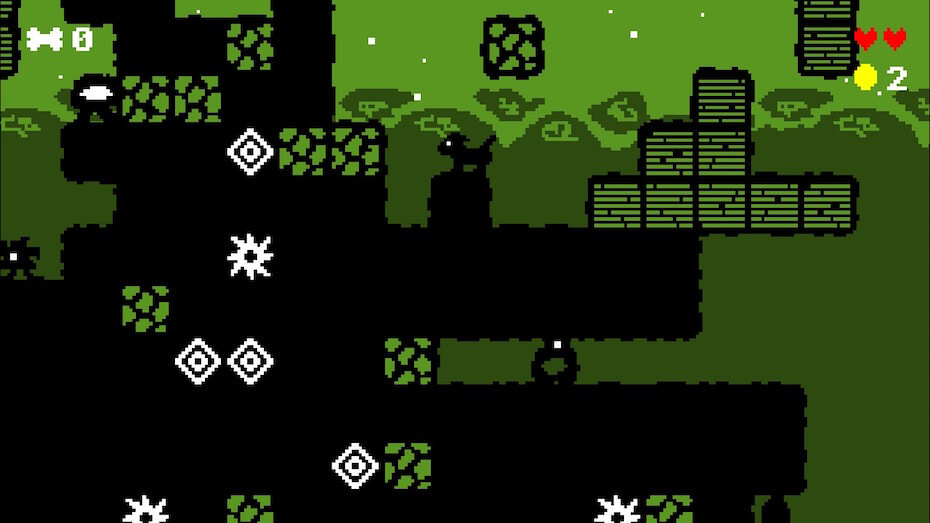 Once your run does end, the bones you collected along the way get added to your all-time total. Every time you reach a new milestone, you unlock a different color palette you can apply to game. While these are fun, a lot are pretty harsh on my eyes, and even though I've collected a bunch, my favorite remains the default Dig Dog palette. 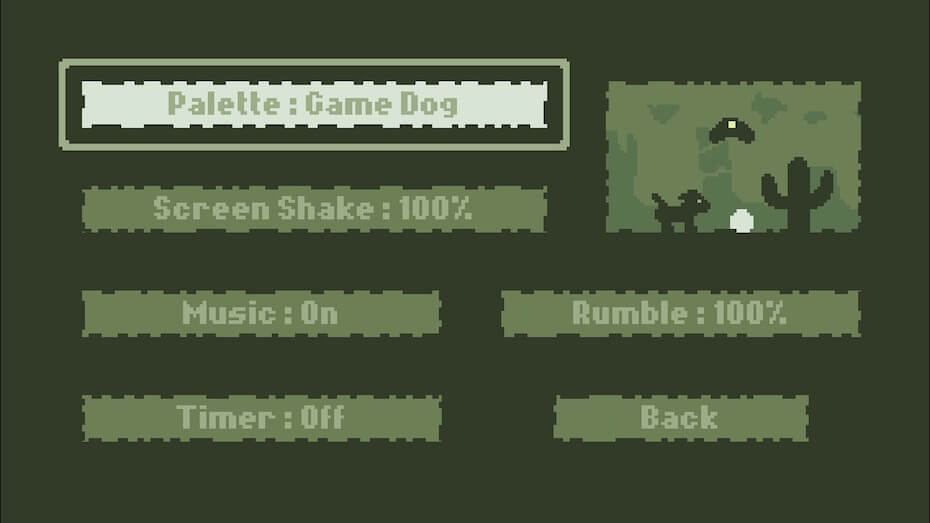 When you've gotten to a certain area three times, you'll also be able to warp there from the beginning of each run. Though this is a quicker way to unlock more of the game, it sometimes is wiser to start in an earlier area and work up your coin count, and dexterity before you get there. And if you're working on your bone count, you'll definitely want to start from the beginning. 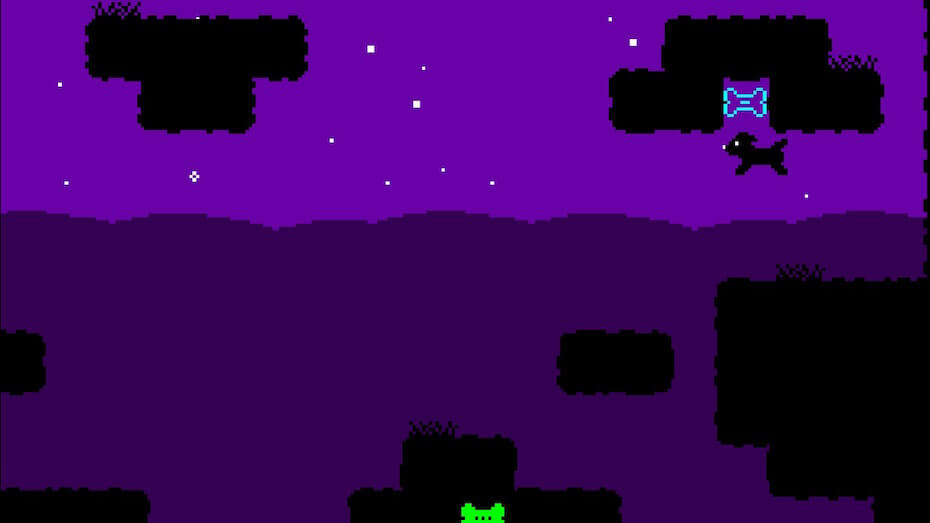 By the time I'd finally managed to make my way through the red-tinged last area, the game looped back around to the first world—this time with a giant aqua-colored sawblade threatening to destroy me. I immediately panicked and lost both of the hearts I'd managed to take there, but I was pretty proud of the achievement. 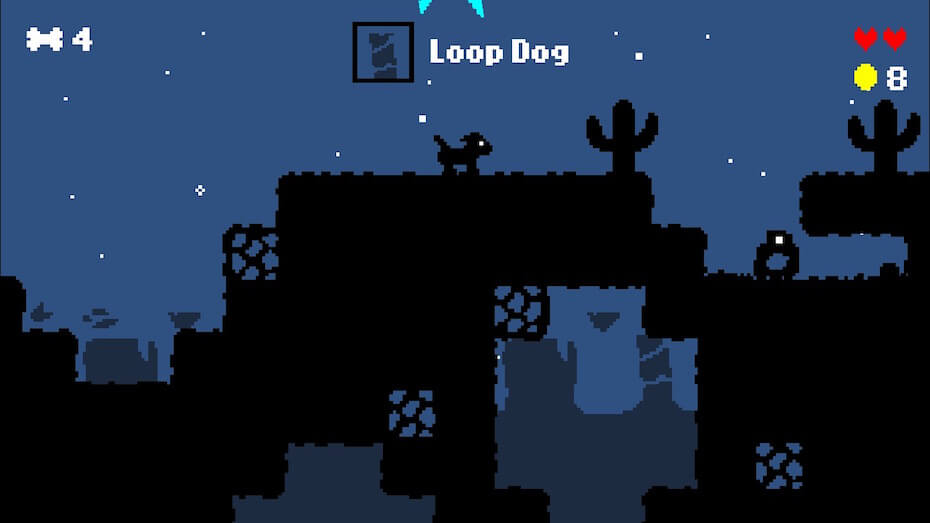 Progression in Dig Dog always feels well-earned and satisfying. In less adept hands, a game like this would be pretty forgettable, but I've already sunk many hours into the title, and I plan on sinking even more. Since the game is broken into bite-sized pieces, you're constantly rewarded for playing well. And whenever I wasn't playing well, I could hop back into the next round in an instant with the hopes of getting a little further than I had before.

Though the game's art may look simplistic, it's also strikingly bold. At no point do things ever appear muddled or unclear. You wouldn't expect it, but there's a lot of charm to the game's style—particularly when the dog starts wagging its little tail out of nowhere. Simple color swaps and changes in background elements made each of the four worlds feel unique, and I absolutely love the retro 8-bit music in Dig Dog.

While the first night-shrouded area has a laid-back sound with a steady beat, the music in the desert area is thrillingly adventurous. It made me feel like I was accomplishing something by getting there. The third area's green tons and chill music gave me major Sonic vibes, and the mountain level's track made me feel like I was going into battle every time I got there. The songs are seriously good, and I hope they get some love as people discover the game on the Switch.

I'm far from mastering Dig Dog, and even though I've completed "the loop" I still need to hone my skills a bit further before I'll be able to get there consistently and dodge that infernal blade. Because of how the game works, some runs are tougher than others, and when I finally made it through for the first time, I was probably just lucky to get the level layouts I did.

Still, I take solace in the fact that, for one brief moment, I was tied for first on the Most Bones leaderboard for the game—even if I was only competing with 12 other people. 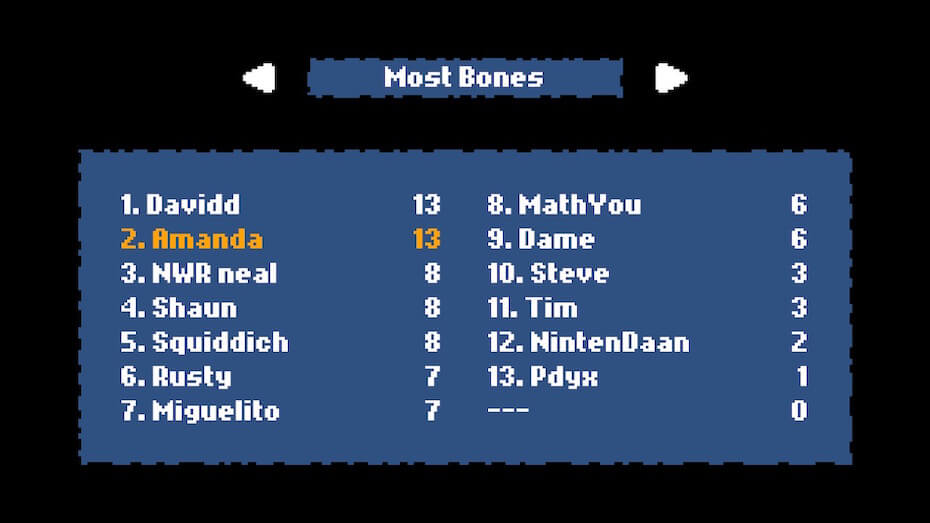 Dig Dog is available today in the Nintendo Switch eShop for $3.99—but if you don't have a Switch, it's also available on iOS for just $2.99.

If you love the look of Dig Dog, click HERE to find out why you should also play Minit.