Donya Nasser is an advocate for young women in politics who was named one of Glamour's Top 10 College Women this year. 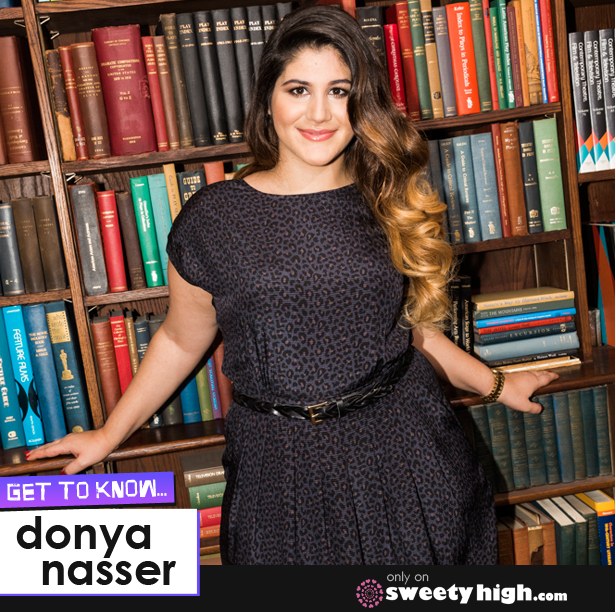 In a recent interview, Donya spoke with us about the importance of women's rights, her foundation of Watch. Her. Lead., and why it's important that diversity is represented in politics!

Donya Nasser's passion for women's rights was instilled in her at a young age.

"I think I've always been raised with this idea of being a feminist even if I didn't know it was called 'feminism,'" Donya said. "My mom has raised me from day one to believe in equal rights for women and girls based off of her own experiences, and I've always had faith in my abilities as a woman who can do anything."

In high school, Donya had her first experience with politics. She soon realized that her belief in equal rights for women went hand in hand with her new interest.

"A program called Youth in Government sparked my interest in policy and running for office," she explained. "From then on, I knew I wanted to run for office and serve as a advocate for women, minorities, and other underserved communities."

Growing up, Donya's mother had always told her to "Never forget that you have to work ten times harder than everyone else." Though Donya didn't understand what it meant at the time, the phrase later played a key role in her career.

"I remember feeling angry because I didn't understand why she would tell me that I had to work harder or that I had all of these obstacles I was unaware of," Donya said.

But as she grew older, it all began to make sense.

"I became conscious of these obstacles and understood what my mom had meant," she said. "It means that because I am a woman, a minority, a first-generation American and student, low income, etc. I have to work ten times harder to be on the same level of those who don't have these struggles."

Though women and minorities have slowly gained more representation in politics, things are still far from equal.

"To this day it continues to be true, which is why I fight for oppressed people every day and educate the public about privilege and how these forces work as we navigate through spaces," she said.

For this reason, Donya has made it one of her main goals to fight for a representation of diversity in leadership roles.

"All voices deserve to be heard, and all faces deserve to be seen," she explained. "It is important to fight for diversity in our leadership because all of those groups that are underserved now deserve a chance for fair and equal representation.If we have a homogenous Congress, how can we expect them to advocate for all of the identities that they may not know anything about? That is why it is important we keep advocating for diversity."

In January of 2013, Donya Nasser started a project called Watch.Her.Lead. to combat the issue.

"I realized that there weren't enough young women of color that were in the spaces I was so privileged to be invited into," she said. "I was always one of five or ten minority women in a group of tens or hundreds of young women interested in running for office."

Watch.Her.Lead.'s biggest priority is to utilize various methods to encourage young women of color to run for office.

"It is important to have that exposure, to have that seed planted, even if they don't immediately know or believe they can run for office," Donya said. "I've been able to do this through my travels, through the exposure I've received and through the fellowships I'm apart of that support this project and the work I do with it."

Earlier this year, Donya was named one of Glamour's Top 10 College Women of 2014.

Donya called this "The most unforgettable experience of my life."

"When they notified me, I was SO excited and shocked that I stopped breathing while simultaneously screaming and jumping up and down," she said. "I'm so blessed to have had this opportunity. It definitely wasn't something I ever expected."

Donya is currently a student at St. John's University, where she majors in government and politics. Her goals for the future include furthering her education.

"I want to earn a joint MPP/JD degree, a Master in Public Policy from the Harvard Kennedy School and a law degree from Yale or UC Berkeley," she said.

She then plans to put those degrees to work and run for office herself.

"The dream is to be elected the first Iranian-American US Senator, and maybe one day be appointed the US Ambassador-at-Large for Global Women's Issues," she said.

Asked if she had anything to add, Donya shared the words that she lives by:

"Reach for the stars with one hand, but make sure you leave one hand near the ground to uplift your sisters with you," she said.

To keep up with all of the latest from Donya Nasser, be sure to follow her on Twitter here! You can also tell us about what girl power means to you at Sweety High!