Dylan Riley Snyder is best known for his portrayal of Milton Krupnick on Disney XD's Kickin' It, which recently started its 4th season! 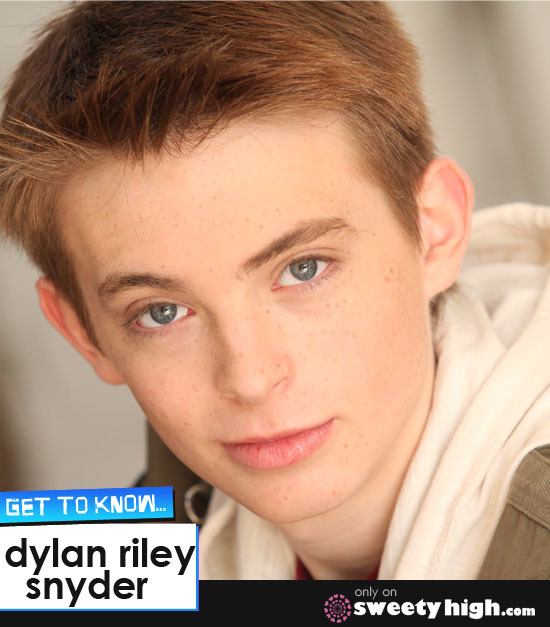 We recently spoke with the young star about his acting origins, what to look forward to in season 4 and all of the great work he's being doing for a great cause!

Dylan Riley Snyder was basically born into acting. When Dylan was young, his mother was heavily involved with community theatre.

"When I was being born she actually was in the Wizard of Oz playing the Wicked Witch," he said.

Dylan's mother often brought him to rehearsals even as a baby.

"She wanted to mother me but she also wanted to act, so I ended up submersed in that environment," he explained. "One day they said, 'Hey, we need someone to do this. Dylan, can you take direction?' I was just 18 months and barely walking."

But Dylan took direction well. He did exactly what he was told. He continued to audition and nab roles, and he couldn't even talk yet.

"Then I started speaking and singing and it grew from there," he said. "It's not so much that I've known I wanted to do it all my life, it's that I have been doing it all my life, and I love it."

Dylan stars as the slightly nerdy Milton Krupnick on the Disney XD series, Kickin' It. He explained that as the series has continued, he and his onscreen counterpart have grown more alike.

"Milton used to be very socially inexperienced. He didn't have the experience talking with other people and interacting and through being with the dojo he's really opened up," he said. "But I've been open. As he's become more of a people person in that world, he's been becoming more like me."

On the other hand, Dylan has been saying Milton's tag lines and become more and more like his character.

"Being him for so many days out of the year and whatnot, I really start gaining his personality traits," he said.

Kickin' It returned for its 4th season on Disney XD on February 17th!

Dylan explained that season 4 of the series was all about big changes.

"We're just trying to reinvent the wheel to make this one better than previous seasons," he said. "We got rid of out old dojo near old Falafel Phil's. We're in a new mall in a new dojo."

The show has also worked harder than ever to create big and impressive fight scenes.

"They take a lot of our energy to make, and they look amazing," Dylan said. "Stuff that would take a month and a half on a single camera, we're doing in two days, and we're making it look pretty amazing."

Dylan believes all of the hard work will pay off for the creators of the show and fans alike.

"We're hoping the fans really really capture and see that spirit and enjoy it," he said.

"That's exciting," Dylan said. "He's a hulking guy. Keep a look out for him. You really can't miss him."

Dylan also champions a number of awesome causes. On March 16, Dylan will be meeting fans as part of one of the biggest events for kids in Long Island, the Kids Carnival for a Cure!

Kids will be able to meet Dylan and have a great day at Dave and Buster's to raise money for the Diabetes Research Institute and Foundation!

"The Kids Carnival For a Cure close to my heart because my grandfather actually has diabetes and it's something I've had in my life that I've had to understand and figure out how to deal with," he said. "It's something I want to promote the cure for."

He's also a partner of the American Cancer Society, participating in the Relay Recess program to educate kids about cancer while introducing them to community service work.

"I've joined them to help with their efforts and promote awareness and tell my story basically," Dylan explained.

About 36 years ago, Dylan's grandmother was diagnosed with breast cancer.

"She was a fighter. She pushed through and she's living today," he said. "If that hadn't been the case I would have never known her. I love the time that I spend with my grandmother, and I want to use my position in the world to help raise awareness for that cause."

Last but not least, he recently became a Youth Ambassador for the LOLLIPOP Theater Network. Through the program he has visited local hospitals to invite kid patients and visitors to learn about music!

"We all ask the kids about their favorite things and we create a song, and let them learn what the music notes are, and tones, and we teach them the lingo," he explained. "We all sing it together and make a video. It's really a cool program."

You can tune into new episodes of Kickin' It on Monday nights on Disney XD! For the latest updates on Dylan, be sure to follow his Twitter account @DylanRSnyder, and join our community at SweetyHigh.com for all of the latest on Kickin' It!