It's not that I dislike them aesthetically—in fact, I think they can be gorgeous and an awesome way to express yourself artistically—but I'll always prefer them on other people. I can hardly place stickers without later lamenting the choice I'd made, and I feel that if I permanently put something on my body, my inconsistent nature would have me regretting it before long. Temporary tattoos, on the other hand? Now that's something I can get behind.

And henna is the O.G. temporary tattoo. In fact, the practice goes all the way back to ancient Egypt and has been used in various parts of the world to create stunning looks that you don't have to stick with forever. I hadn't had a henna tattoo since I was a kid, so when the folks behind Earth Henna asked if I'd like to try one of their kits for myself, I jumped at the opportunity. Here's what happened.

Earth Henna has been around for more than 20 years with the mission of making the best henna temporary tattoo kits available. It was actually founded by the couple who created the first-ever henna tattoo studio in the U.S. Soon after its opening, the duo realized there was a huge desire for at-home henna kits. They worked tirelessly, traveling the world to find the best ingredients available and to develop a way to share the paste, since fresh henna only lasts three days. Eventually, they developed a recipe for mixing at home, which became their Original Earth Henna Body Painting Kit. They also operate under fair-trade practices, creating better lives for the Moroccan farmers who provide the henna used in their kits. The Earth Henna Premium Kit I was sent retails for $27.50.

Before I got to using my kit, I made sure to thoroughly read all of the directions. I was glad I did because the process is a bit of a commitment. I realized I'd need one hour for the henna paste to set, up to half an hour for the henna to dry, and then another six hours before I could peel the henna off. I decided to save it for the weekend when the dyeing process wouldn't get in the way of my work, and patiently waited for the time to come. 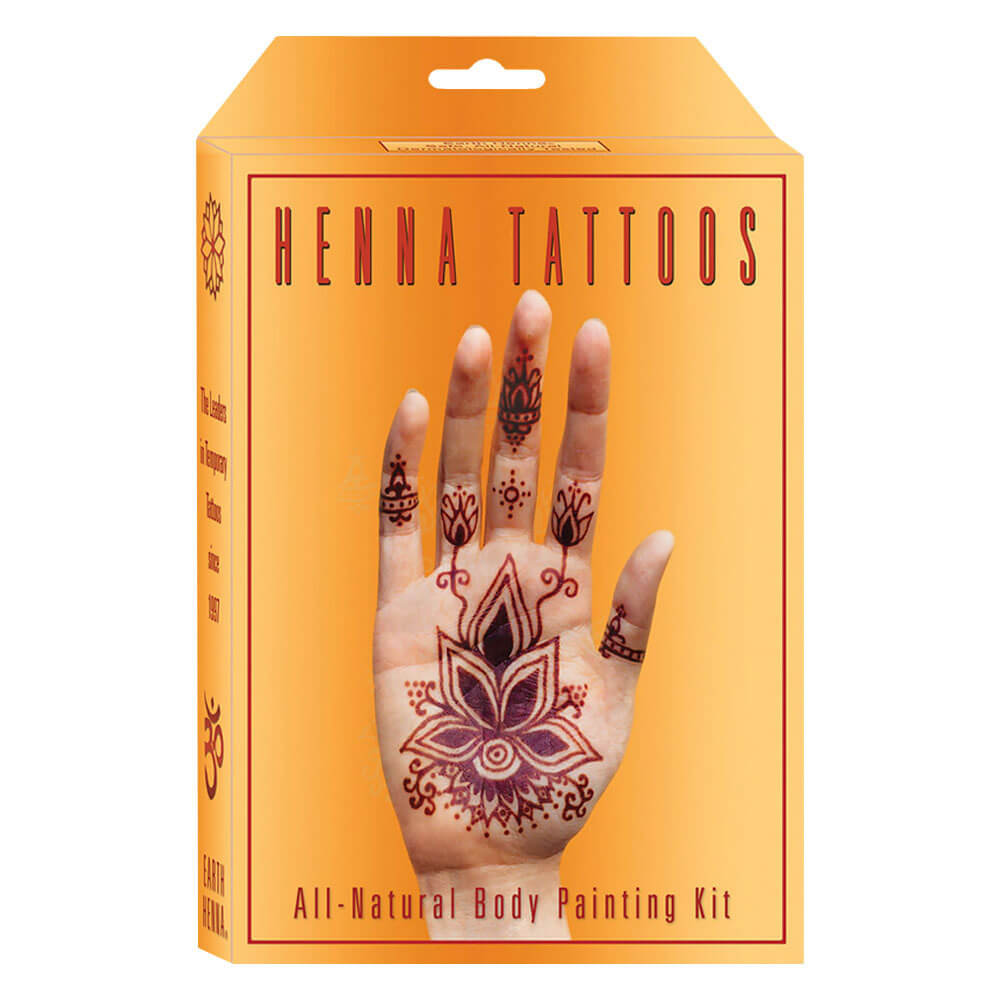 In the meantime, I developed my design. I decided I wanted to go off of the beaten track and incorporate Makar from The Legend of Zelda into my henna tattoo, bringing in elements from the 35 reusable stencil transfers that were included. Here was the result: 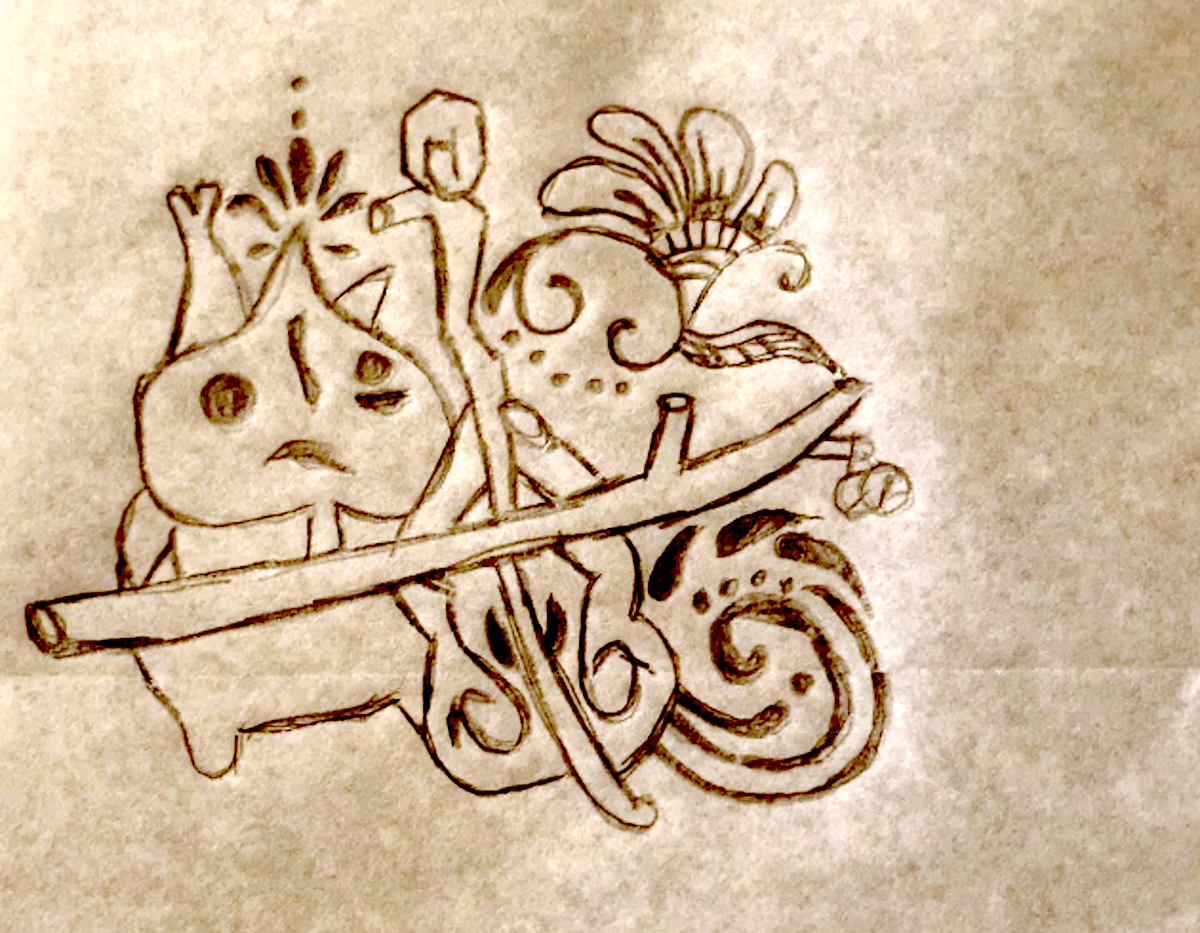 Then the time came. I followed the directions, pouring a small tub of green henna paste into a cone-shaped bag, plus both bags of pre-mixed solution. Then I sealed the bag, mixed the contents well and allowed that to sit for an hour.

During that time, I made a stencil transfer with my drawing. The process is a little like using carbon copy paper. I layered my drawing over the Master Sheet and traced it hard with a pencil to get the ink onto the bottom of the Master sheet before cutting it out.

After the hour had elapsed, I used a pair of scissors to make a small hole at the tip of the cone, and then filled as much henna paste as I could into the applicator bottle. Even once it was full, the tube still had about half of the paste left.

Then, it was time to apply the stencil transfer, a bit like a temporary tattoo. I wet my skin with water, placed the stencil face down and held it in place for about a minute to get the drawing to copy over. The result was a bit messy, but it was mostly something I could work with. I realized maybe I shouldn't have come up with such an intricate design—especially on my first attempt—but I decided to go for it anyhow. 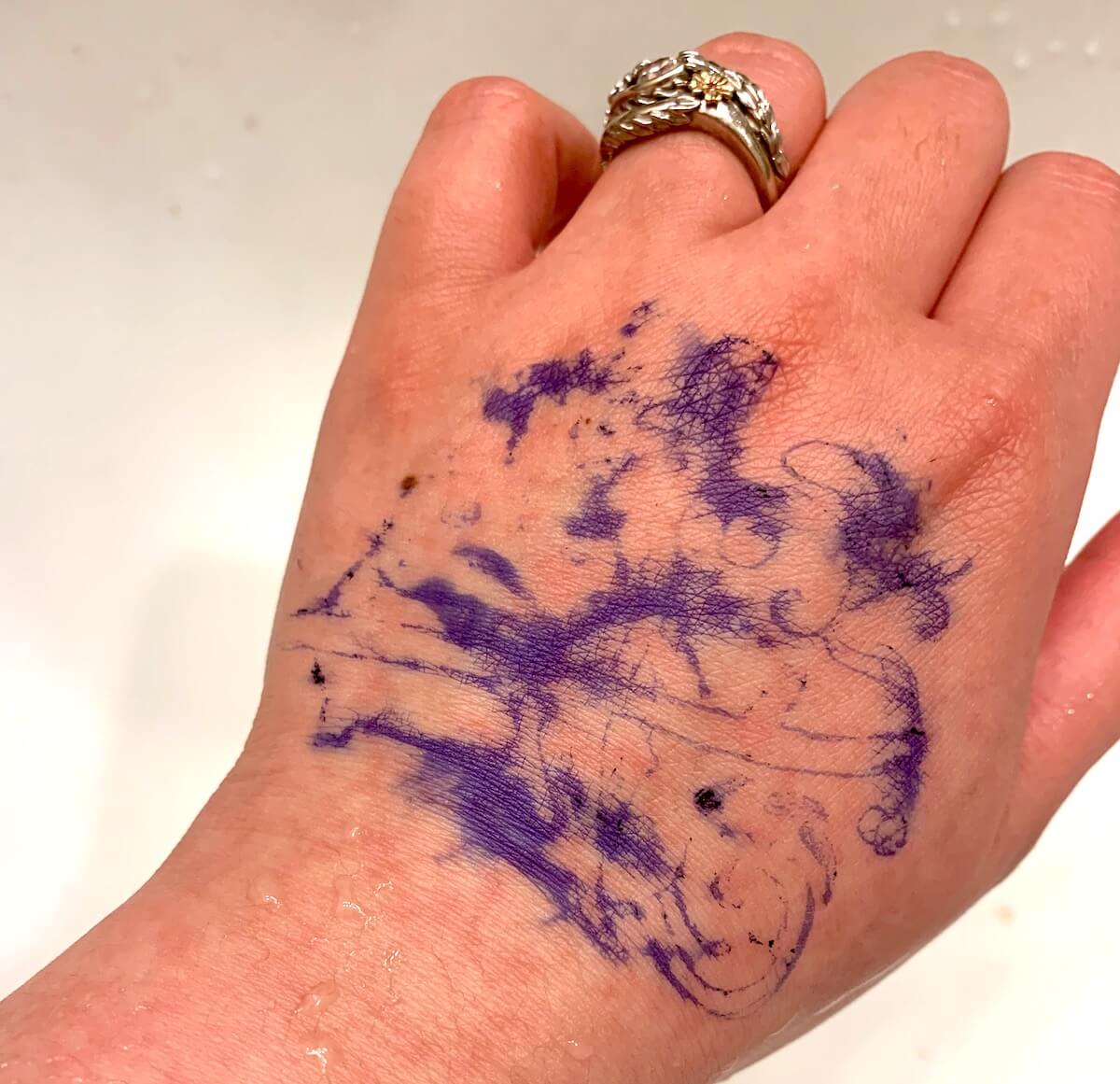 From there, I slowly traced the stencil in by squeezing henna out of the applicator bottle through the metal tip. My hands were a bit unsteady throughout—this definitely takes practice—but after a while, the design was fully traced. I could also use the provided toothpicks to smooth out the design where I'd messed it up. I packed up the rest of the henna, popped it in the fridge, and then it was all about waiting. 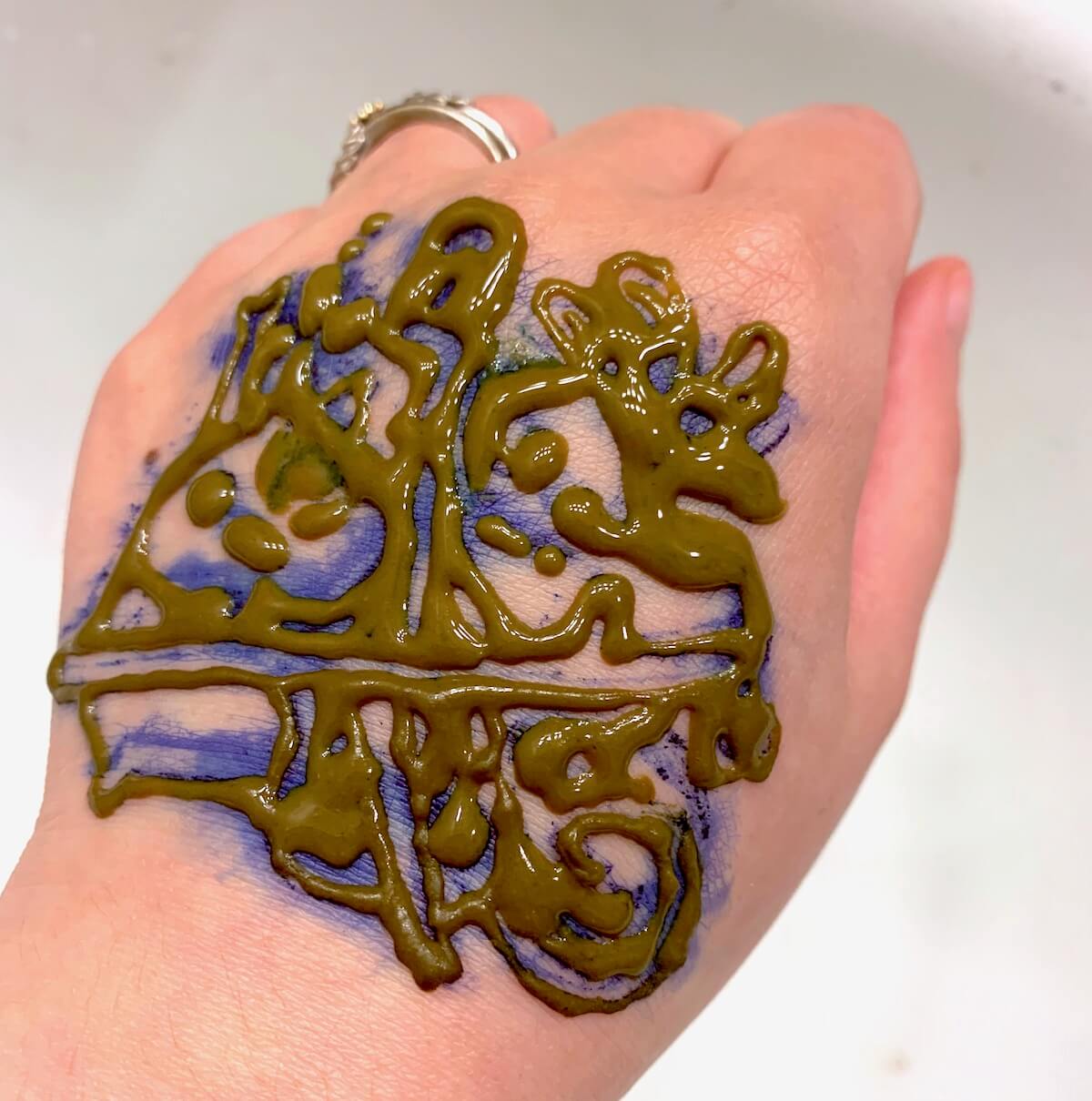 While the instructions say that it will take 20 to 30 minutes for the paste to dry, mine took closer to an hour to dry fully, perhaps because I'd used a little too much in certain areas. Even so, I made sure not to touch it as it dried. But even once it had, I had another six hours to wait, in which I couldn't do anything too strenuous so I didn't accidentally flake off the paste. I'll have to admit this was tough for me. I felt like I had to just sit around because everything I wanted to do would smudge the henna or remove it too early. But, finally, that time had elapsed, and I could flake off all of the henna that had clung to my hand for hours. The design was a very pale brown, but this is typical. I had to wait about a day and a half until the design really began to show up.

But when it did, I was pretty impressed with it. The design wasn't perfect by any means, but that was all due to my own shaky hands and inexperience. I thought it looked super cute, and the dark color looked fantastic. It looked that way for another couple of days before it began fading, and by the eighth day or so, it had disappeared completely. The box says the design should last for seven to 10 days, so the timing was exactly as described. 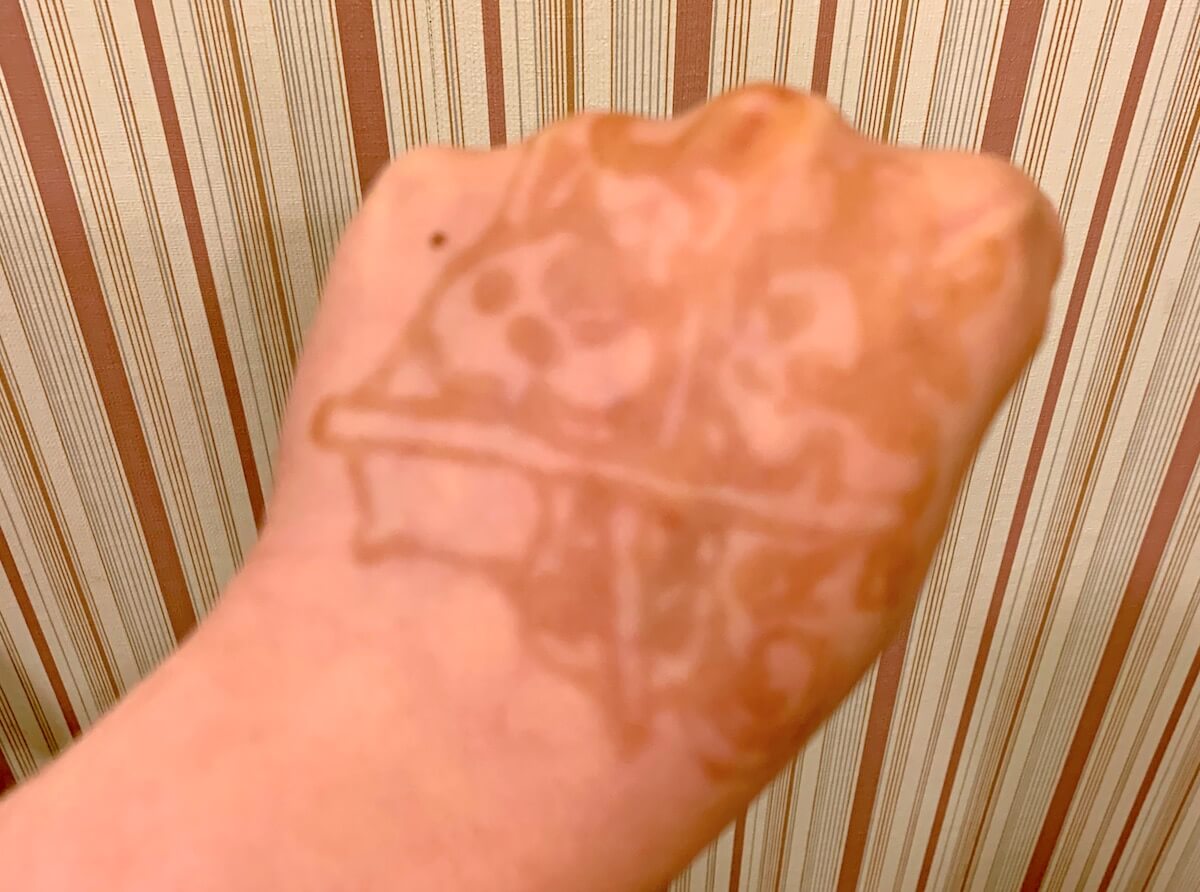 And, since the mixed henna paste lasts for up to three weeks in the fridge, I still have time to figure out whether I want another henna tattoo. There's enough henna in the kit to do 20 to 30 designs, after all, and I don't want to waste it.

This at-home henna kit is great for anyone who's ever wanted to try their hand at henna. They provide so many great designs in the packaging, but they also give you the option to come up with your own, making it super versatile. It also includes a lot of henna, and with a three-week window to use it once mixed, your options are wide open. Of course, not everyone has the time in their schedule to keep something on their skin for almost seven hours straight without messing it up. It's a commitment, but that's another thing that makes henna so special.

Don't have the time for henna? Click HERE to check out some of our favorite temporary tattoo brands.