If You're Obsessed With Animals, Ecologies Might Be Your Next Card Game Obsession

I've always been an animal lover, and, over time, that's made me develop a strong love for zoology and ecology.

So when I was scrolling through Instagram and I stumbled upon a science-inspired card game called Ecologies, I was immediately intrigued. I knew I had to reach out to creator Matthew Montrose to see if I could get my hands on the game, and he generously sent me a deck so I could experience the unique game for myself.

Ecologies is a card game designed by biology instructor Matthew Montrose that integrates a science lesson about animals and ecology into a game that's fun and exciting to play. The deck includes 108 cards featuring 77 unique plants, fungus and animals from seven different biomes, and a handy booklet for teaching people how to play. It's playable by one to six people and is available on The Game Crafter website for $24.99. 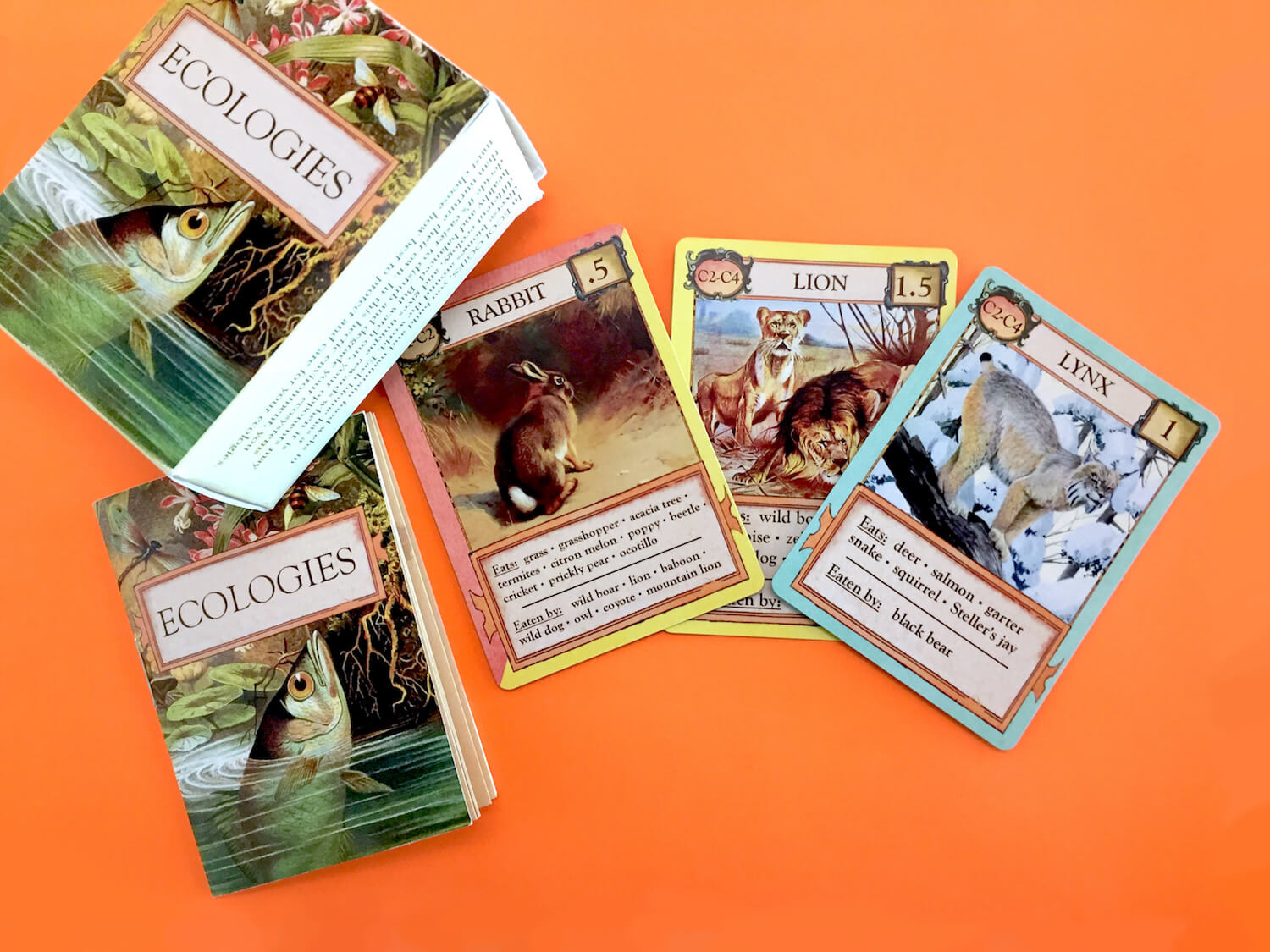 I don't know if this was intentional, but when I opened my Ecologies card box, I was delighted to find that it seemed to be lightly scented with pine. Before I got into learning the rules of the game, I felt compelled to rifle through the cards and admire the artwork. The deck includes 108 cards with 94 unique illustrations, and each and every one is gorgeously rendered, whether you're looking at a cactus or phytoplankton or a ravenous polar bear. This deck is worth collecting for the art itself.

The deck includes 77 organism cards, 21 biome cards, and 10 biotic and abiotic factor cards, which equate to living and non-living parts of an ecosystem that can impact it in some way.

The science of ecology studies how the living and non-living parts of a system work (or don't work) together, and the goal of the game is to create sustainable biomes, which are biological communities with a shared physical climate. A desert biome is different from a tundra biome, which in turn is very different from the various forest biomes, and each one is color-coded within the game. 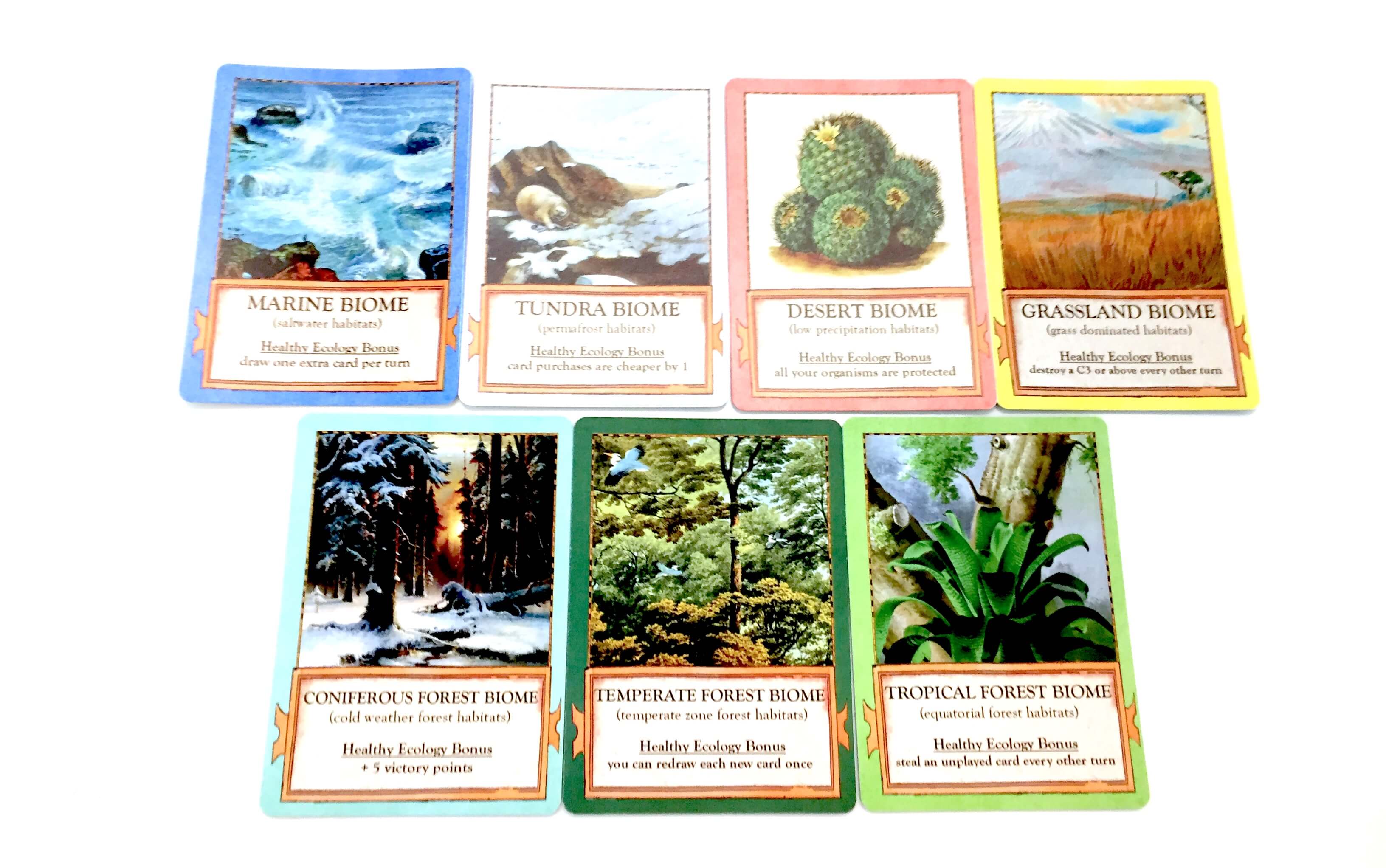 In order for the biomes to be healthy, players need to create food webs within them. These food webs show how energy moves within a biome, starting with the sun's rays being converted into sugars by producers, or plants. Plant-eating herbivores then get their energy by consuming plants, and meat-eating carnivores get theirs by eating other animals at various levels within the web. Beyond that, there are also decomposers (such as mushrooms), detrivores (such as earthworms) and animals that are sometimes scavengers (such as badgers), which return the nutrients of decaying organisms back into the system. Each of them plays a role in the system, from producer to different levels of consumers, and cards can be played as long as everyone in the web has something to eat.

Each organism card tells you the biome(s) in which it lives, what the organism eats, and what it's eaten by. As players build their biomes, they place cards above their food sources, besides the scavenger, decomposer and detrivore cards, which live on the same level as the primary consumer plants. 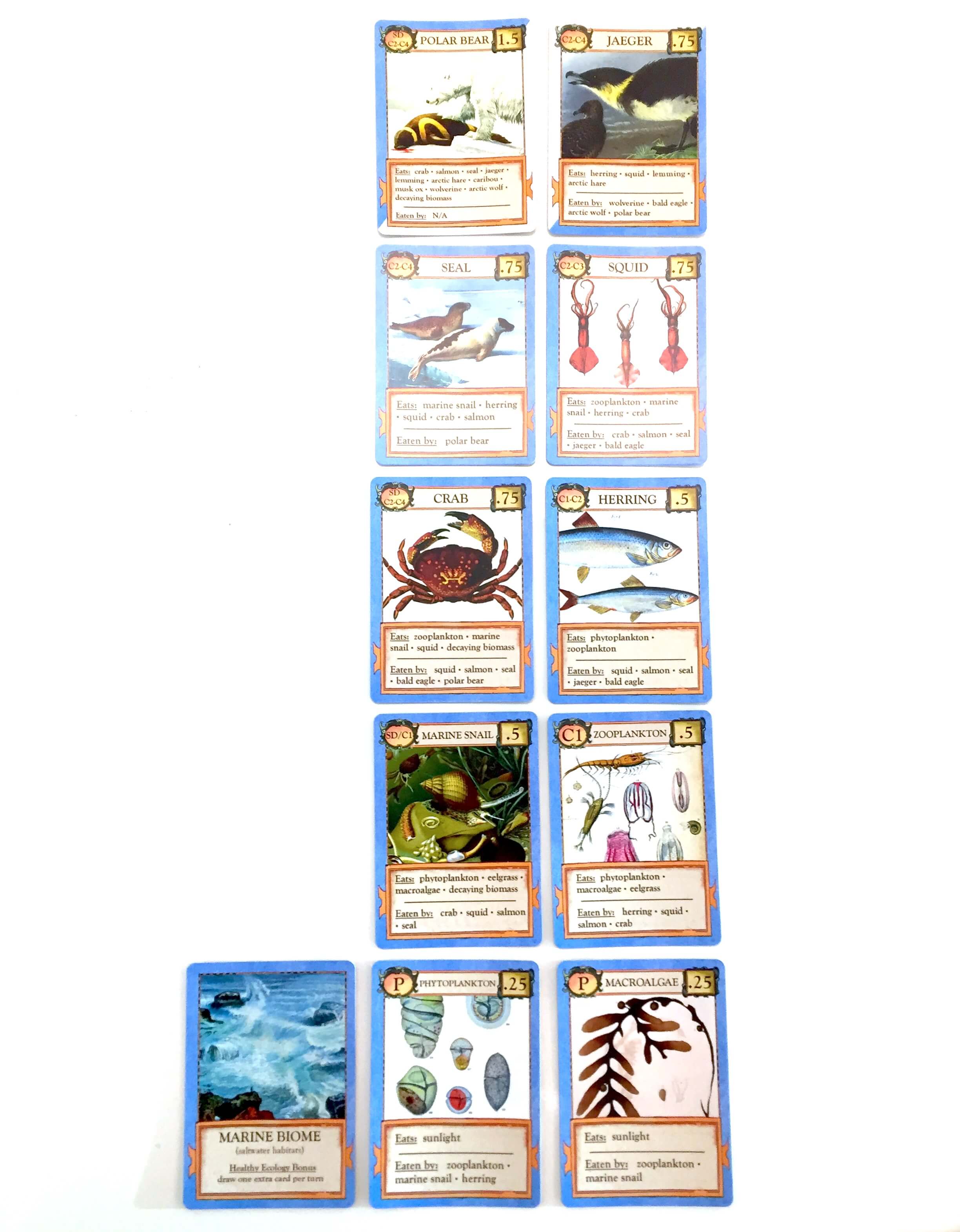 The healthiest ecologies have a good mix at each level, and the game rewards a bonus when food chains have at least one organism each at the producer and scavenger/decomposer levels, and consumer levels one through three. Each biome also offers different rewards. Many cards also happen to fit into various roles. For example, the coyote is a scavenger, as well as a consumer from levels one to four. This card is very versatile and can be moved around almost anywhere in the web as the rules allow.

The aim is to care for your biomes to keep them thriving—or to disrupt your rivals' biomes to collapse theirs. This is where the biotic and abiotic factor cards come in. Maybe you want to introduce predators into an opponent's biome at just the right moment to throw it all off, or change the oxygen level in your own biome to introduce more life there. All of this might sound complicated, but, in practice, it's just plain fun, and it's tough to put down.

In a competitive game, the winner is the first to get to 15 victory points. Each organism card has its own point value ranging between .25 to 1.5, so it can take a minute to get there, with the average game lasting between an hour and 90 minutes. The gameplay is based on a cycle of drawing cards, trading them with other players, playing your hand and purchasing new cards, which keeps things fresh regardless of how many rounds you play. It's designed to simulate the concepts of ecology accurately while also implying them enough for a smoothly running game.

If I have to complain about one aspect of the game, it's that tallying up fractions of points listed on cards can be a bit of a pain, even if they are in neat quarters. I think it would be simpler to multiply the card values by four and work toward a point total of 60, but that's just me!

And while the game is playable by up to six players, I also personally enjoyed the solitaire-like single-player mode, which is more about racking up a high score before the deck runs out, collecting as many points as possible with only 14 cards in play at a time. Not only is it really fun, but it's great practice for your next round with friends.

Ecologies won't be for everyone, but if you're an animal enthusiast who enjoys Settlers of Catan-style card games, you'll fall hard for both the aesthetic and the gameplay offered here. At $25, it's priced right for a card game of its style, and even when you're not playing, the cards feel like little pieces of art to collect and share. The game's creator has said that expansion packs are on the way, and I for one and very excited to see them.

On the lookout for more great board games? Click HERE to find out why Game of Phones is a must-play for anyone obsessed with their phone.