12-year-old Elayna Hasty is the mind behind the anti-bullying organization G.A.B. Girls, or Girls Against Bullying Girls! 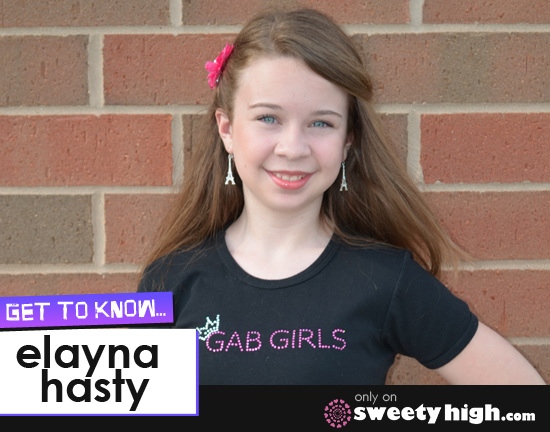 Elayna recently spoke with us about her own experiences with bullying and why advocating against bullying and support self-esteem are so important to her!

A combination of experiences inspired Elayna to create G.A.B. Girls.

Elayna faced her own bullying experiences at school starting in the 1st grade up until she was in the 5th grade.

"I was tormented by an adult when I was young, telling me I was fat, stupid and worthless," Elayna explained. "She always made fun of my clothes."

"The school bully that was mean to other girls would mock me," she said.

"The main reason anti-bullying is so close to my heart is because my friend was being bullied not just at school, but online to the point where she left school to be homeschooled," Elayna said.

Elayna's friend was bullied around the age of 12, and preteens are the most likely to get bullied, Elayna said.

"It really hurt and bothered me," she said. "I am just thankful that she is ok. I know how it feels to be treated like that and not to have someone to protect you, especially if it is someone that should."

Elayna was just 10 at the time, but she had had enough.

"I knew I needed help to not only help my friend and myself but other children," she said. "After that week of name calling and comments I finally went to my parents."

Speaking with her parents was a big help for Elayna.

"My parents have always supported and encouraged me to stand up for what was right, even if that meant I would stand alone at times," she said. "I was really frustrated and hurt for my girlfriend that was hurting. It wasn't fair. Girls were just jealous of her."

After speaking with her mother, Elayna decided that she needed to somehow be a part of putting an end to this bullying.

"She said we would never stop people being purposely mean, but there was the ability to support, encourage, and help to make a difference," she said.

The two got out a pen and paper and brainstormed ideas. Eventually, they came up with the idea for a Facebook page for the cause.

"She thought of a support page that we named G.A.B. Girls, because girls like to gab," Elayna explained.

G.A.B. Girls came to stand for "Girls Against Bullying Girls." Her parents helped her set up the Facebook page and a website, and ordered bracelets and t-shirts.

"Mom also had me research and read about bullying, as well as abusive behavior, so I could learn to help others and help me understand why some people could be cruel," she said.

Through her research, she gathered a lot of valuable information about bullying.

"Bullying can be so harmful and so hurtful," she said. "It is a huge problem today."

She explained that, while bullying has always been a problem, it can be even worse now that young people can bully each other on computers, phones and social media that doesn't require them to be face-to-face.

"It is easier to torment others with computers and cell phones," she said. "I think that people have lower self-esteems due to their own experiences and hurt."

People might bully others for a number of reasons, Elayna added.

"It's their own insecurity and jealousy," she said. "Adults don't always pick up on it."

She added that some kids have learned bullying behaviors because they, too, were were bullied.

But the cycle of bullying can be broken with positivity.

"We all need to have power words and inspirational quotes to remind us not to let the bully tell us what or who we are," she said.

She quoted anti-bullying advocate Ashley Berry, who said, "Don't let the bully define you. Instead, let them inspire you to make a difference in the world."

"I think a healthy self-esteem is important for everyone," she said. "There will always be people that will try and pull you down, are jealous or just don't like you or what you stand for."

But in maintaining good self-esteem, it's especially important to always remain true to yourself, she said.

"My mom loves to tell me and my friends 'Don't be a cookie cutter,'" Elayna explained. "If you focus on being your own unique, beautiful self, then you will be stronger when it comes to peer pressure and won't be comparing your abilities to others. If you learn from every obstacle you will become stronger. You will grow in confidence and demonstrate the qualities of a true leader."

With that in mind, Elayna says that people can grow up to become the happiest versions of themselves.

"Positive self-esteem helps people to grow, be happy, responsible, and respectful people," Elayna said. "They learn to take action, make positive choices about their own lives and do positive things for others. They think about the world around them, not themselves. They express their feelings and acknowledge the feelings and thoughts of others in caring ways."

We can become particularly empowered when healthy self-esteem and leadership are combined.

"Girls feel good about themselves and grow up with the feeling they can make a difference," she said. "We all have our moments of insecurity, but we can be strong when we rely on our own circle of loved ones."

So what should you do if you see bullying taking place?

"Don't be a bystander," she said. "If you see someone being mean or doing something wrong, say something! Think about how you would feel if you were in that victim's s shoes and were all by yourself."

She also advised kids to get involved in their community or at school, or start a support group, and find trusted adults and ask for their help to put an end to bullying.

"I want to be a support system and I want every girl to know that they not only have a support system but they have the ability to lead, encourage, and most importantly, empower others to make a positive difference in their community and our world," Elayna said.

Elayna aspires to help G.A.B. Girls become a nationally recognized anti-bullying organization, and to continue to help people all around the country deal with their own bullying problems.

She hopes that schools everywhere might have their own G.A.B. Girls after school programs, and that she might be able to share G.A.B. Girls on Good Morning America and on the Disney Channel.

In college, she plans to earn a degree to become a pediatric psychologist.

"I will be able to not only help children deal with hurt from other issues but I will continue to work and expand G.A.B. Girls," she said.

One of Elayna's biggest inspirations throughout the whole process has been her great grandma Smith.

"She inspires me all the time," Elayna said. "She is always trying to help others and has been listening to me since I was 4 years old. I think her encouragement, love and support have really helped me. She is always telling me she is proud of me."

She also wanted to remind girls everywhere that she's there to help.

"I answer all my own email from girls asking for advice or moms wanting to help their kids," she said. "We just started doing workshops last year. I really enjoy doing them and know that I am making a difference."

Check out G.A.B. Girls on their social pages below, and click here to find out how to reach out to G.A.B. Girls! You can also join our anti-bullying online community at SweetyHigh.com!