Elizabeth Yarnold took home the gold medal in the women's skeleton event at the Sochi 2014 Winter Olympics on Valentine's Day! 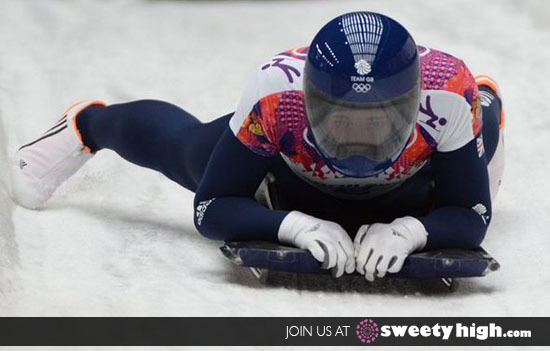 In skeleton, athletes ride a tiny sled down an icy track while lying face down. This can be a risky sport, as sliders can reach speeds of up to 80 miles per hour!

The event was added to the Winter Olympics in 2002 in Salt Lake City, Utah.

Gold medalist Elizabeth Yarnold, 25, is originally from Kent, England. When she was younger she participated in track and field events, but started competing in skeleton in 2010. It wasn't long before she started winning races.

In 2012, she took home the bronze at the International Bobsleigh and Tobogganing Federation Wold Championships, and won the gold in the 2013/2014 season of the Skeleton World Cup!

Finally, this year all of the hard work culminated in her win of an Olympic gold medal!

American Noelle Pikus-Pace took silver medal in the event. We think these athletes are an incredible example to girls everywhere!

Join us at Sweety High and comment below to tell us about your favorite Olympic events! Also be sure to participate in our Gold Olympics contest here!