Nickelodeon fans are quickly becoming familiar with 9-year-old actress Ella Anderson, who stars in the movie A Fairly Odd Summer as well as the upcoming series Henry Danger! 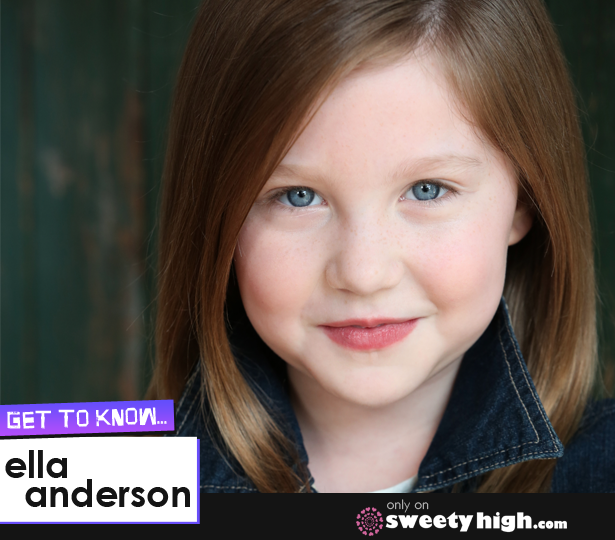 Ella spoke with us at Sweety High about both of those roles, her passion for acting and much more!

"I have always LOVED playing make believe and so getting to be an actress is a very natural thing for me," she said. "Even when I am not working, I like to make up plays and movies with my friends. We even make music videos and put on shows for our parents."

When she was 5, Ella was cast as Jamie in the football film Touchback.

"It was like a dream," Ella said. "I really loved every single second of it."

Before the film started shooting, Ella attended a week of rehearsals with the rest of the cast.

"It was in August so it was like summer camp for me," she said. "That week we spent lots of hotel time at the pool so I got really close with my movie sister, Jacquelyn Evola. That helped a lot when the camera rolled on the first day because we already had such great chemistry."

The experience was pivotal in Ella's career.

"It was on that set that I decided that I wanted to be an actress for the rest of my life," she said. "Once we wrapped, I couldn't wait to get back on set again."

Since then, Ella has kept bust with a number of TV and movie roles. She recently played Mitzy Mulligan in Fairly Odd Summer, which debuted on Nickelodeon on August 2!

"When I got the role of Mitzy in Fairly Odd Summer I was stunned because the Fairly OddParents is my FAVE TV show ever!" she said. "I have major FOP marathons with my friends and I seriously screamed so loud my neighbors probably wondered what was going on at my house!"

In the movie, Ella starred alongside Carter Hastings, who played her brother, Marty Mulligan. Mitzy and Marty are ready to take an amazing vacation in Hawaii with their parents, until everything goes wrong!

"We end up going with Timmy Turner's evil old babysitter Vicky," she explained. "Our trip is miserable with Vicky until we sneak away and meet up with Timmy and Tootie. We end up having to help save lives in the fairy world and we get an awesome surprise at the end of the movie. You will have to watch it to find out what that surprise is."

"I was BEYOND thrilled to get to be a part of the Nickelodeon family yet again," she said.

In Henry Danger, Ella plays the role of Piper Hart, the younger sister of the title character, Henry.

"Piper's brother Henry gets a job as a side kick to Captain Man and he has to keep it a secret from his friends Jasper and Charlotte," Ella explained. "The series is awesome and there will be LOTS of crazy stuff that happens."

According to Ella, her character Piper is all about drama.

"Piper is seriously overdramatic!" she said. "She goes crazy over the tiniest little problem. She is obsessed with social media and always has her phone on her. She yells at her brother Henry a lot, although she doesn't try to be mean really, she just feels like things in her world are just "NOT OKAY"!"

While the hour-long premiere of Henry Danger aired on July 26, Ella said that fans will have to tune in in September when it continues to find out more!

Ella has played a number of different roles, and each of them challenged her in different ways.

"The fun of being an actress is that I get to play so many different roles," Ella said. "Each role becomes a very special memory. There are even roles that I have auditioned for and not booked that I loved playing. Some stand out more than others…but I could never just pick one."

But there's one role that would probably stand out for Ella, if it existed. Ella has always wanted Warner Bros. to make an Elf sequel, and she'd love to play the daughter of the two main characters, played by Will Ferrell and Zooey Deschanel.

We asked Ella what she would want to happen in Elf 2!

"I think that I would want to be like a mini adult who doesn't embrace elf culture," she said. "I am the polar opposite of my dad, Buddy. We end up going to the North Pole and craziness happens and I end up finding the Christmas spirit that my dad loves. Let 's do this!!!"