Emi-Jay's Founders On The Business of Hair Ties!

Emi-Jay started as a homegrown hair tie and headband company created by teen entrepreneurs Emily Matson and Julianne Goldmark when they were just 13 years old. 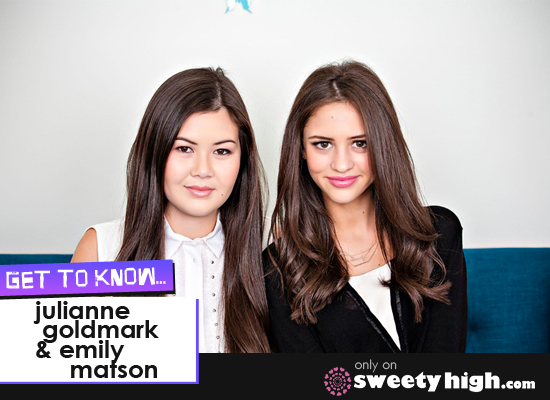 Since then, their products have been carried in Nordstrom, Henri Bendel and over 3,000 speciality stores across North America. Emi-Jay is now distributed internationally and their designs have been spotted on the biggest celebs, including Jennifer Aniston and Sarah Jessica Parker!

We recently spoke to Emily and Julianne, who are now college freshmen, about the origin of Emi-Jay and growing a successful business from the ground up!

Emily Matson and Julianne Goldmark met in the 7th grade when they were 13.

At the time, neither of the girls had ever thought about entrepreneurship, but it wasn't long before the two devised the idea that would eventually bloom into the Emi-Jay company.

"To be honest, I don't even think the term 'entrepreneur' was on our radar back then, as we were only in middle school," Emily said.

The two were inspired by a fashion craze that was a little out of the average teenage price range.

"Initially we noticed a growing trend of hair accessories among our friends at school and on TV shows such as Gossip Girl," Emily said. "However, most of the pieces out there were far too elaborate and expensive for teenage girls such as ourselves."

The duo decided to go to Downtown Los Angeles' garment district to buy materials to create their own designs.

"Once Jennifer Aniston wore one of our original hair ties on the red carpet, we received an email from Marie Claire magazine, which is what really turned our hobby into an actual business," Emily said. "From there, we had no choice but to come up with a company name and a website. Before that point, it was nothing but a mere hobby!"

When it came to naming their business, they combined their names to create Emi-Jay.

"It is such an honor to see our product on the wrists and in the hair of these celebs!" Emily said.

But Emi-Jay has also inspired a number of imitators.

"It's definitely sometimes frustrating, however we pride ourselves in our products being made here in the U.S.!" Julianne said. "Our products are all handmade of the best fabrics, and cut at a slant, which sets ours apart from others!"

Emi-Jay also prides itself in donating 20% of its proceeds to the duo's favorite charities, including Operation Smile, Step Up Women's Network and Project Knapsack.

"We're always looking for different kinds of organizations that have a special place in our hearts and we can really connect with," Julianne said.

"From SPANX to Splendid, we've had the honor of collaborating with some of our favorite brands," Emily said.

Now Emily and Julianne are both freshmen in college and manage a team that helps with the business' day-to-day operations.

"We both design the products, work with marketing," Julianne said. "All business and creative decisions are made by us alongside our moms, and I personally love running our social media! Everyday there's something different which is the best part of it."

Julianne said the toughest part about running the business was time management and juggling so many duties.

"Having to miss school can sometimes get a little stressful, as well as always making sure our entire team is on the same page and aware of everything," she said.

However, it's all worth it when Emily and Julianne get to see the fruits of their efforts.

"The most rewarding part is seeing people on the street wearing Emi-Jay or walking into a store and seeing your products on the counter!" Julianne said. "It's a great feeling!"

The company has not just had success in the U.S., but also has distribution in countries including Sweden and South Korea. The company is growing rapidly, and are credited with introducing a fresh and modern take on hair ties across the world!

This summer, Emi-Jay will be launching their brand new website and products with a fresh look. They will also be collaborating with Stila cosmetics!

"Emily and I are older now so we are excited to expand into more amazing ventures and collaborations!" Julianne said. "We just partnered with Stila Cosmetics and a few other amazing brands that we're so excited to announce!"

Want to learn more about Emi-Jay? Be sure to check out their social media pages below. And if you're an aspiring entrepreneur, share your story with us at SweetyHigh.com!