Emily Briere and the Time Capsule To Mars!

Emily Briere is just a junior in college, but she's already co-founded three start-ups, researched with NASA and started an ambitious project to send a Time Capsule to Mars! 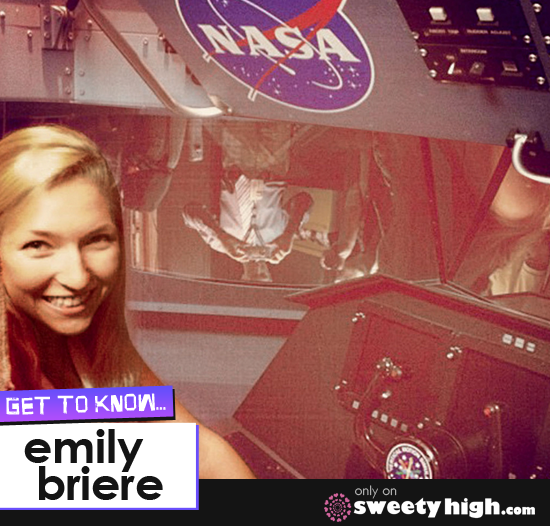 We recently spoke with Emily about her passion for space, her experiences as a summer research associate at NASA and her plan to lead the private team to land something on Mars!

Emily Briere was just 6 or 7 years old when she became obsessed with space. Her parents recognized her interest at a young age and would buy her books and movies about black holes and space travel.

"I would make astronaut suits out of cardboard boxes and tinfoil and dryer tubing and would prance around the room, jumping on the couch pretending it was microgravity," she said. "My friends and I would always play astronauts."

In school, Emily succeeded in math and science.

"My mom's a scientist, and we had a science lab in our house growing up, so it was something I had grown up around," she said.

However, Emily did see that as she progressed in school that there were fewer and fewer females in her science courses.

"I think it's that there aren't just that many women in the field," she said. "You get used to seeing very few girls in your classes, and it might even start to feel like it's unnatural for you to be in those positions."

Emily said that having a science-minded mother likely guided her own interest in the field.

"It helped me to believe that seeing women in science was the norm," she explained. "She's a psychologist, and she does a lot of research into gender stereotypes, such as the disposition of males versus females."

When Emily's mother would take Emily and her brother, Nick, to toy stores, she would conduct small social experiments to see which kid picked which toys.

"She wouldn't immediately bring me over me over to the dolls, or bring Nick over to the guns," Emily explained. "She would let us pick out what we wanted. A lot of the time my choices were more gender neutral. She definitely let us figure it out in our own way and explore what were interested in, rather than doing what we thought we were supposed to be interested in."

Emily Briere's interests and motivated paid off early. She was the cofounder of three different startups by the time she was 15 years old.

The first was MoxMe!, a communication platform.

"We were looking around our community and seeing difficulty with communication," Emily said. "If there was a soccer team and a game got canceled, they would call everyone. The communication was inefficient."

To combat this problem, Emily joined her twin brother Nick and a few friends to create a social network to facilitate communication and calendars within any kind of group or community, such as a classroom or soccer team.

"If a group leader wanted to send out a message, everyone would be contacted in the way they wanted to be contacted," she said. "They would get a text, an email or a call to make sure everyone knows what's going on."

Emily and her brother also created an online website called Certamen, where kids could get exposure to classical languages like Latin.

The third startup was called Cut-Out Kids. It was a video production company that made cut-out animations as promo videos for corporations. The company helped Emily raise nearly $10,000 toward college.

In 2013, Emily became the youngest summer research associate at NASA ever.

"It was a lot of fun, but it was definitely an extreme environment," Emily said. "We were sleeping just 4 hours a night."

While Emily was still a teenager about to turn 20 when she entered the program, her roommates were 26 and 27 years old.

"I was around a bunch of people who were at very different places in their lives than I was at that time," she said. "But it was very very cool to be exposed to all of these different people and to travel so much. It was an amazing program that really exposes you to the entirety of the space realm."

During the course of the program, she learned about private industries, visited corporations and NASA centers, and took part in a number of interactive projects. For example, she spent time co-creating a modular bioreactor for the International Space Station!

During that time, Emily attended  a space conference in Washington D.C., where she recognized a shift in thought over the years regarding space exploration. During the Apollo era, countries were motivated to push forward in innovation to beat the other countries to the punch.

Emily especially wanted to find a way to get involved because there's a lot of new technology that has not yet been tested in the microgravity of space.

"That's how we came up with the ideas for a Time Capsule to Mars," she said. "We're representing all the different pillars that we find important."

The project is pushing forward a lot of new technology, including testing out ion electrospray propulsion, which is being developed at MIT.

"We'll also be engaging K-12 kids in an online portal on the internet where they can log in and do problems and activities," she said. "There's the whole idea of getting the world involved, and that's where the time capsule comes into play."

People from all over the world can send in their personal photos, video and audio, which will be encoded onto the time capsule, for a small price. The mission, which is estimated to cost about $25 million, will be entirely crowdfunded.

Once Emily earns her degree in mechanical engineering at Duke University, she hopes to also pursue a degree in aerospace engineering. After that, she'd like to work at an organization such as Research for Life, or return to NASA to work.

She added that she loves the mentality at Google, including the "Solve for X" project, which is about discussing innovative ideas to create solutions to the world's problems.

"If Google were to start doing research in space, which I've been waiting on for a awhile, then that's what I would want to be working on," she said.

Though Emily Briere's goals are ambitious, we believe they are within reach.

For the latest updates on Time Capsule To Mars and to make your own donations to get the project going, check out their official website and Twitter page. Tell us about your favorite young women scientists at SweetyHigh.com!