Emily Cohn is a teenage filmmaker and  All-American High School Film Festival winner! She recently spoke with us about her recent award and filmmaking inspiration! 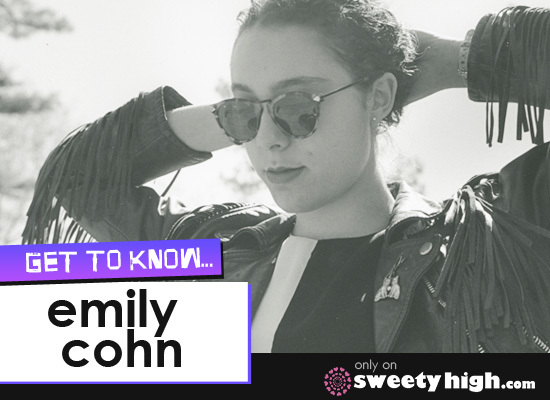 Emily Cohn's interest in film and editing began in the 8th grade. This fall, Emily entered the All-American High School Film Festival, which highlights amazing teen films from across the U.S.

"I entered the festival on a whim," Emily said. "There was no submission fee so I figured, why not?!"

Emily submitted three of the films she had made over the previous two years, and two of those films got into the festival.

Those films were the stop-motion animation film "Let's Play," and a short drama called "Pierced." To create "Pierced," Emily had received funding from her fellowship with the Tribeca Film Institute.

"The festival weekend was really exciting. I had no idea what to expect," she said.

Emily said that she was utterly inspired by the films she saw at the festival.

"Everything was made by other high school students, so if I loved a film the prospects of me being able to produce something of equal quality seemed more attainable compared to if I watch a big Hollywood movie or graduate film school short," she explained.

To create "Let's Play," Emily spent a full day filming with her friends, and filmed the other sections over the course of a few weeks. She edited the piece together with Final Cut.

"Those parts were definitely tedious, but very rewarding once I saw it all together!" Emily said. "I couldn't feel my right arm for a few days after moving stuff so slightly over and over again."

Though Emily doesn't remember exactly when she first became interested in stop-motion, she does credit stop motion animator Rivkah Gevinson, sister of Tavi Gevinson, as one of her inspirations.

Emily's other entry, a short film called "Pierced," won in the festival's best drama category. It tells the story of two unlikely friends whose differences are beginning to drive them apart.

"'Pierced' was inspired by two very different girls at my high school who were not friends," Emily said. "I tried to imagine what their friendship might be like and went from there with the general idea of a friendship between a 'good' girl and a 'bad' girl.

Emily honed her skills with a media project called the Do Not Enter Diaries, which she created with her best friend, Emma Orlow at the beginning of 2013.

Emily and Emma were obsessed with blogs as well as teenage girl culture, but realized the two didn't often meet.

While there were plenty of great blogs to read, including a few aimed at teens, very little content was actually generated by teens. In particular, there was a dearth of video content created by teenagers.

"It's hard to look at films made by adults who have a lot of previous experience and resources and feel like you can go out there and make something just as good," Emily said. "I was lucky to have support from my high school and eventually from my film fellowship, but I think it's important to keep making stuff and not worry about quality as much right away."

The Do Not Enter Diaries are a series of video interviews conducted by Emma and filmed and edited by Emily. Emily recorded them on an inexpensive Sony camcorder without any sound equipment.

"I eventually learned how to use other cameras and was able to borrow nicer cameras and sound equipment from my school, but Emma and I mainly just had fun with it!" she said.

Emily had always felt the need to highlight the accomplishments young people can achieve.

"It was important for me to show how cool, creative, and smart teens are," Emily said. "I've always felt like a 60-year-old woman inside a kid's body and it always bothered me when adults would question whether a kid or teenager was capable of some task or not or was surprised by how impressive something was because a kid was doing it."

Emily and Emma already knew many teens who were already excellent filmmakers.

"This was a nice way for us to showcase not only the level of dedication we have to projects we work on, but also the dedication that all of our friends have with their various endeavors," she said.

Emily said her biggest inspirations are women who broke ground in entertainment.

"I feel extremely lucky to be growing up with such an amazing set of female role models in the film industry," she said.

"I have my two best role models in my mother and her best friend, both of whom are great moms that work around the clock and always make time to give me advice and talk me through any issues I'm having socially or creatively," she said.

Emily told us that she never set out with a "girl power" angle in her films.

"But since I'm a girl and all of my protagonists have been girls so far, there is naturally that underlying element," she said.

Emily believes that other aspiring filmmakers shouldn't let anything get in their way.

"Just make stuff," she urged. "And keep making stuff. Don't worry about quality too much in the beginning. Try things out. Mess up. Redo it."

But Emily admitted that she feels strange doling out advice. She's still just a teen filmmaker herself, constantly learning from her mistakes.

Emily has taken multiple approaches to her own filmmaking. For some of her pieces, including "Pierced," she has obsessed over one project, adjusting it over and over again to make it as perfect as it can be.

Other times, as with the Do Not Enter Diaries, she just kept filming to make as much creative content as possible.

"I always like to compare Woody Allen to Quentin Tarantino, both of whom I'm obsessed with," she said. "Woody Allen has made a film a year for almost his entire career. Some were better than others, but he keeps going. Tarantino, on the other hand, takes more time for each film and ends up with extremely these extremely complex stories that he clearly spent a lot of time working through and editing."

Now, Emily is a full-time college student. She's currently in production for a web series for a new media company that is set to launch in 2014!

"I think for anyone trying to pursue any art form, try to find at least one person you can talk through your ideas with, whether it's a friend who you want to collaborate with or a teacher, advisor or a parent figure, having people to talk to has always been a big help for me," she said. "I wouldn't be able to get to my final projects without the support of all my friends, family, and teachers."

But most importantly, Emily believes that filmmakers should have fun.

Are you an aspiring filmmakers? Show off your talents with us at Sweety High!

animationlets playthe do not enter diaries