Emily Miller is a senior member of the Mount Olive Robotics Team's all-girls team, which won the GirlPOWER Competition earlier this year! We chatted with Emily about getting started in robotics, and what it was like to take home the top prize! 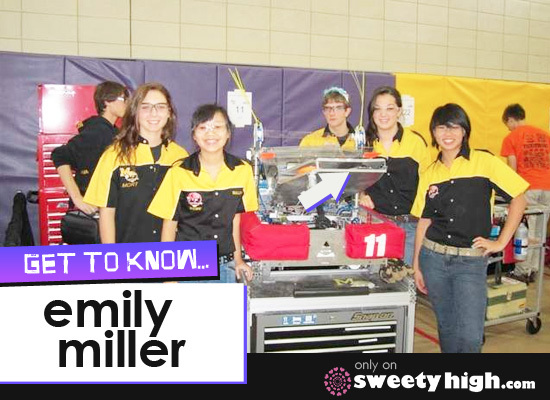 Emily Miller hadn't even heard of robotics before middle school. In the 6th grade, she joined a robotics club, where she learned how to build and program Lego NXT robots.

"It wasn't until 8th grade when I was introduced to the world of FIRST," she said.

FIRST, or For Inspiration and Recognition of Science and Technology, is an organization that encourages interest in engineering and technology among students. They also host  FIRST Robotics Competitions, where high school students from across the world compete in robot building competitions.

"After that I was hooked," she said.

When she started attending Mount Olive High School, Emily knew immediately that she would become a member of the illustrious Mount Olive Robotics Team, or MORT.

For her first two years, Emily was on the design sub-team, and learned how to use programs like the 3D product simulation tools Autodesk Inventor and Solidworks.

"From there I was captained non-technical project manager for both my junior and senior year," she said. "I've learned so much. I wouldn't trade this experience for the world."

MORT is currently made up of about 130 students. Only about 30 of those students are female. This year, MORT created their first all-girl team.

"My freshman year there were only 6 girls, so to see this increase in such a short period of time is insane," she said. "To be able to create the first all-girls drive team in our 17 year history was an amazing experience. Being on a team of over 100 guys is extremely intimidating, so having the opportunity to be a part of this was amazing."

Emily will be the first to point out that there aren't as many girls as boys in robotics, but she's glad to see more girls get involved.

"Being a girl made you stick out like a sore thumb," she said. "Now the ratio is starting to even out more as more and more girls come to realize that robotics does not have to be male dominated."

Emily said that it was also great to see that the girls, who were a minority at FIRST, were just as capable of driving robots as the boys.

"I'm very proud of all of the girls that took the time to practice and learn to drive the robots that they might have not had the opportunity to drive before," she said.

For the time being, Emily has almost single-mindedly been focused on her interest in robotics.

"At this moment I eat sleep and breathe robotics," she said.

"I haven't really allowed myself any time to study much else," she said. "But I do plan on pursuing a major in architecture in college, a more art-based field but still in the realm of STEM."

Recently, Emily and the rest of her all-girls team from MORT competed in the GirlPOWER Robotics Competition, an all-female robotics competition in Pennsylvania.

Before the actual competition, Emily had never actually laid hands on a robot.

"I had always been on the computer end of the spectrum and to be able to shoot discs on the field to score our alliance points was an incredible feeling," she said.

The event included 16 teams. In January, the teams were given their challenge to build a robot that shoots Frisbees and climbs a pyramid. FIRST gave the teams 6 weeks to build their robots.

"Competing at GirlPOWER was unlike any other experience I've had by far as a senior in high school," she said. "I've not seen our team compete like this before. It was incredible to be a part of."

At the end of the competition, MORT's girl team took home the GirlPOWER competition's top prize!

"Walking in there we weren't sure how we were going to do but we didn't think we would do poorly," she said. "After we had won the semi-finals we thought to ourselves that we knew what we had to do to get this done, and to take home the trophy."

Emily loved being a part of MORT history by winning the event with girl power in mind.

"We had proved all of the stereotypes wrong, we had won a competition filled with all girls and it was an amazing feeling."

Even though robotics might look difficult on the surface, Emily suggested that more girls should give it a shot.

"The way I look it at it is that robotics is just as intimidating as starting a new sport is," she said. "You're going to be in an uncomfortable situation for a short period of time, but then you're going to realize that you love. Although it is male-dominated you should not see that as a deterrent."

Emily believes that as time goes on, the divide between girls and boys in robotics and the other science, technology, engineering and math fields, or STEM, will grow even smaller.

"Girls are realizing that they do not have to stick to stereotypes," she said. "Breaking that barrier will only benefit them. Although it is male dominated now, STEM careers will not be for long."

She added that she absolutely can't wait to see what the team will be able to accomplish in the near future.

"Throughout my time on the team I have never been as proud to be on the team as I was then," she said. "I consider it a turning point for our team. Even though I am graduating at the end of the year, I look forward to seeing what MORT's ladies do in the future."

Do you have an interest in robotics? Check out FIRST's website here, and join us at Sweety High to tell us all about your STEM passions!