11-year-old Emma makes videos with her brothers, Jonah and Noah, under the YouTube name KittiesMama. The siblings recently partnered with Nintendo for a new Nintendo 3DS ad campaign, and we spoke with Emma to get the inside scoop! 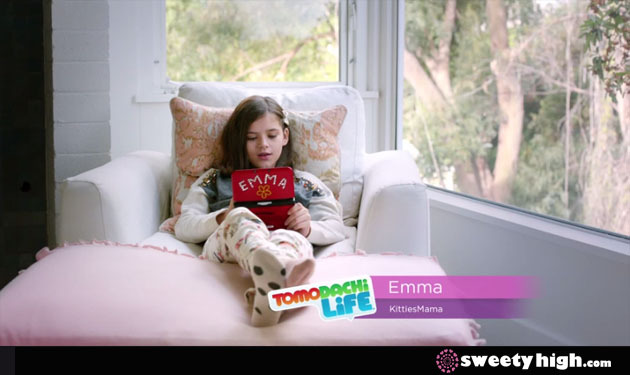 Emma and her brothers are long-time fans of Nintendo and the 3DS system.

"I really like all their games and all the cool stuff, and how many different designs they have on their system," Emma explained.

While she has a number of favorite games, she said that a few titles make the very top of her list.

"Animal Crossing is definitely my favorite," she said. "I play it almost every day. You can run around and do a bunch of stuff in Animal Crossing."

She's also a huge fan of the Pokémon series, including the 2013 releases Pokémon X and Y. She played a lot of Pokémon X and has since moved on to the latest release, Pokémon Alpha Sapphire.

"I was also really excited for Pokémon Art Academy," Emma said. "It was a really fun game and since I've been drawing and stuff since before it came out, I really was excited to have a game that would teach me how to draw Pokémon."

To Emma, the Pokémon series is about more than just collecting cute monsters.

"I really think Pokémon is super fun because you kind of get to choose what you are doing and you get to catch your own Pokémon and do everything you want," she said. "It's like a good game to play freely. It's fun and there's goals that you have to reach."

The Nintendo 3DS is a favorite game system of the siblings for a few reasons.

"It's really fun how it's portable," she said. "They have XLs and small ones and there are different designs you can have. It's really cool."

Next week, KittiesMama will also be releasing a video reviewing the Nintendo 3DS Games Tomodachi Life and Animal Crossing.

In addition to reviewing games, the trio do skits, room tours, fashion shows, show off collections and much more.

"It's really cool because sometimes we just get to do vlogs," Emma said. "We get to film what we're doing. It's just life. But then we also all sit on the couch together and review products. It's really fun and whenever we're reviewing stuff, we get to play it in the video."

Emma was just 6 when KittiesMama started. She had no idea that their channel might someday have more than 760,000 subscribers, like it does today.

"I had no idea what the heck we were doing," she said. "I was just like 'Yay! We're going to do stuff.' As soon as we started getting popular I thought it was cool but I was only like six or seven at that time, so I just had no idea what it was. It wasn't important to me at that time."

She was just six when she started doing makeup tutorials, as well. Her style has definitely changed over time.

"When I was younger I would do just like regular makeup tutorials, like smokey eye and stuff," she said. "But then I started doing face paint and I started just doing costume makeup instead. One of the other things is I like doing art, so whenever I get to do the face paint it's really cool to start basically doing art on my face. It was really fun to start that."

To keep up with Emma, Jonah and Noah of KittiesMama, be sure to subscribe to them on YouTube here! Also be sure to share your thoughts in the comments, and tell us about your favorite Nintendo 3DS games and more in our community at SweetyHigh.com!