Erica Englebert is an 17-year-old cheerleader and three-time Cheerleading Worlds champion who recently chatted with us at Sweety High about what it takes to be a cheer champ! 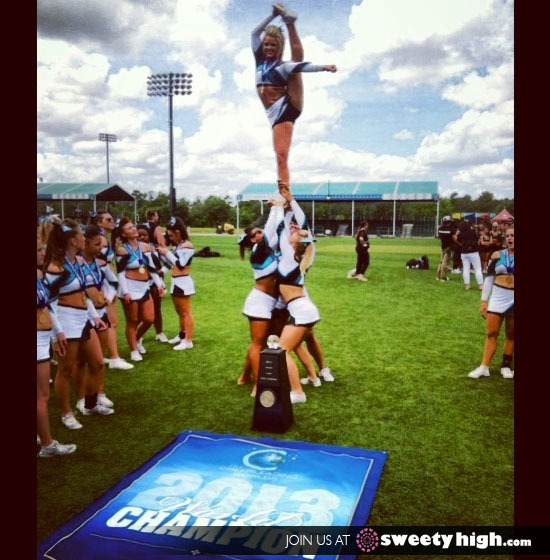 Erica Englebert was just 4 when she started cheerleading.

"I knew nothing about cheerleading at the time," Erica admitted. "I completely embarrassed myself when I first tried out by reaching down and touching my toes when the coach asked me to do a toe touch, but I've been doing it since and I love it. It's my life."

She has now been cheerleading for more than 14 years.

Erica told us that her greatest strengths in cheerleading are stunting and flying.

"I love creating new ideas and stunts to perform with my teammates," she said.

She is also an excellent performer who loves to dance and show off her skills.

"I am in no way afraid to perform in front of thousands of people," she said. "It's where I'm the most comfortable."

Erica also loves to teach others to cheer, and last year she went to Norway to coach at a camp called the Ultimate Cheer Camp.  She  also just finished a cheer clinic in Chicago, Illinois.  There are plans to continue these clinics both nationally and internationally.

She is also a model for Xtreme Spirit Uniforms, as well as GlitzGirl Cosmetics, which is currently developing a signature line of cosmetics called "The Erica Englebert Collection."

"I am so excited about this," Erica said. "It's actually a line that girls can use in their everyday routines, not just cheer."

Erica and her mother, Sandy Maffiold, also have their own line of cheer, dance, and gymnastics apparel called ERICAWEAR Designs.

"It's an amazing and unique line and I'm proud to have my name on each and every piece," she said.

While Maffiold and her husband, Edwin, design and manufactures the line, Erica has creative input on the designs.

"My only role model would be my mom," Erica said. "She taught me everything I know, and she keeps me going when I'm having a hard time. She's someone I really look up to."

Erica is also inspired by her coaches.

Erica said that her coach Sarah Macrow is an inspiration because she is always smiling and telling Erica how proud she is of her.

She is also thankful for tumbling coach Ben Pope.

"He's the man behind the scenes being our big emotional rock and greatest supporter," she said.

"Then last, but not least, there's Courtney Smith-Pope," she said. "She has been my coach and mentor since I was 4 years old and my life will not be the same without her."

Erica's hard work and support from her family and coaches have led Erica's team to win the Cheerleading Worlds championship in 2010, 2012, and 2013.

"Having amazing coaches that know each of their athletes' strengths and weaknesses make all the difference," she said.

Erica described Worlds as the Olympics of cheerleading.

"Words can't describe how amazing it feels to win a world championship," she said. "It's an All-Star cheerleader's dream to win a gold medal at Cheerleading Worlds."

Being a cheerleader has taught Erica valuable life lessons she might not have learned elsewhere.

"It has taught me not to be afraid to go for something you really want," she said. "It taught me to be a leader and take charge in any situation I might face."

"All of the coaches and all of my teammates throughout the last 14 years will forever be my family," she said.

Through hard work, determination, and the right support from amazing mentors, Erica worked to get to where she is now. With the right mindset, anything can be achieved.

"Never give up," Erica advised. "Cheerleading is really hard. You have a lot of practices, and you'll probably get hurt. In fact, I'm hurt right now. But you have to stick through it, and never give up."

Erica is currently in her senior year in high school and considering her options for college.

"I want to be a cheerleader," Erica declared. "I can't just quit now. College cheerleading will be really different from the All Star world."

We wish Erica Englebert all of the best as she continues into the next stages of cheerleading!