13-year-old Estrella Hernandez is the brain behind WeWalk, a mobile fitness app that hopes to motivate kids to walk and engage with the community in San Antonio, Texas! 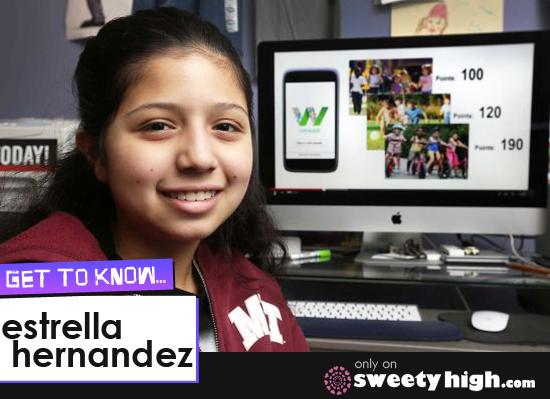 We recently spoke with the teen about the events that inspired WeWalk and about what's next for the awesome app!

Estrella first got interested in coding in the 6th grade, but her passion really grew the next year, thanks to an excellent technology application teacher. The teacher taught Estrella to code using programs like Scratch and Codeacademy.

Though Estrella isn't coding any of the the WeWalk app, she is working closely with developer Sweb Development to make her vision a reality.

"I myself want to learn more coding so I learn more of the in-app stuff," she said. "I've always loved coding because it's simple, but you can do such great things with it. It's just turning your writing and your words into these big concepts."

She was in a 6th grade health class when she became interested in the issue of childhood obesity.

Every week, the class would focus on a topic, such as the dangers or smoking or alcohol.

During the week centering around obesity, Estrella and her class viewed the documentary movie Supersize Me, in which the director faces major health issues after eating nothing but McDonalds for a full month.

"When we ended the movie it was very scary to me how much this is going to plague kids' lives, how these health issues wouldn't go away and how they would really damage someone throughout their life as they continue to get older," she said. "I felt very helpless in the situation, but I wanted to do something."

She continued to ponder the idea throughout the day. When she got home, she got on the computer and had an idea.

"I started using my computer, because that's sort of my central hub for work and play, and I thought, what if I combined what I'm doing now, playing online games, with fitness?" she said.

She told her parents about her new idea, a game for kids centered around fitness, and they encouraged her to pursue it.

The result was the WeWalk app.

WeWalk rewards young people who walk by giving them points, badges and rewards.

"You're not walking just to get healthy, but you might get something cool in the digital world or in the real world for it," she explained. "It's a bit like a video game."

There are three quest types on WeWalk. MyQuest is a simple pedometer that logs the number of steps a walker takes.

WeWalk Quests are predetermined quests using geotracking and geofencing to guide the user around San Antonio to see important historical, artistic or environmental landmarks. These quests integrate information about the areas as well as quizzes to earn more points for users!

Finally, there are City Quests, which are tied to health-related events sponsored or supported by the city. Síclovía is one such event in the city.

"It's an event where lots of streets in San Antonio are closed off and there's music and dancing," she said. "It's really fun and people are supposed to walk, bike or rollerblade down the streets."

Those points can be redeemed for more badges or real life rewards provided by local sponsors, such as discounts at theme parks, events or concerts.

The beta test version of WeWalk was recently debuted at Síclovía!

There, the Mayor's Fitness Student Ambassadors, including Estrella, helped participants to test pilot the app.

"They're a group of individuals who are highly passionate about health and fitness, so if we can get this to them they can give us feedback," she said.

Estrella hopes to get great information on which rewards, routes and incentives the testers like and dislike.

"We can get the perfect mesh of what appeals to the most kids and what's the funnest to make something that's kid approved," she said. "From there we'll try to improve what we're gonna do and make it more tailored to what the testers respond to."

Estrella said that incentives can be a massive motivator for young people.

"I think that gameification is something that kids are innately plugged into, with the technology being so prevalent in our society, kids grow up playing a lot of games, and the thing that makes it appealing is a reward system," she said. "The more you play, the more you earn. By applying this to fitness and pairing it with a community aspect, it becomes more appealing to go out there and interact."

"What we want to do is transform my city into a place where it's more common to see kids running outside and playing around with their friends, walking around learning more about the culture and community of our area," she said.

She hopes the app will not just get people to walk, but will inform people about the cultural hotspots that exist throughout the city.

"We have many many museums here, where kids can go and learn more about any everything from historical eras to paintings," she said. "Helpfully we will achieve the goal in getting the community more in tune with the city."

The cause is especially important to Estrella because of the city she lives in.

"In San Antonio especially, the health effects are very visible," she said. "The national diabetic population is 7%, but here in San Antonio it's 14%."

Estrella said that her research on obesity has led her to discover its two simple causes.

She added that there is a quiz, called the Yum Challenge, structured around MyPlate nutrition guidelines.

"It allows kids to gain more knowledge about what they're eating and healthier alternatives," she explained.

With both tools, kids can really combat childhood obesity.

Once WeWalk beta gets feedback, Estrella hopes they will be able to secure more funding to create a full version of WeWalk for wide release.

Most importantly, Estrella said that a wide release of WeWalk would have to be free.

"The goal is to get it to as many kids as possible," she said.

She also wants to expand the app to have a Spanish version.

"I'm not bilingual myself, but I do know there's a great population of Spanish speakers in this city," she said.

She also hopes to expand the app to a device such as a wristwatch for kids who can't afford or aren't allowed to have phones. A WeBicycle app might also extend the rewards system to people who bike to work and school.

"From there we will try to expand it  and grow to other cities to encourage health and fitness through activity," she said.

Estrella was also able to attend the SXSW Interactive Festival in March, which showcased awesome new technology and digital creativity.

In the future, Estrella would love to be able to present WeWalk at SXSW

"I would love to get the idea out," she said. "Hopefully WeWalk is pretty scalable so we can expand it to other cities. We can encourage kids everywhere to get active and get fit."

We hope that the app will be a massive success in San Antonio and beyond! You can learn more about WeWalk at the social links below, and join us at SweetyHigh.com to tell us what you do to stay healthy!