Everything is less of a video game than it is a bizarre, funny and thought-provoking experience.

A game called Everything runs the risk of overpromising on its potential, but it delivers in a way you might never expect, while repeatedly surprising you.

I began the game as a glowing point, navigating through space while philosophical questions appeared in text at the bottom of the screen. The experience was weird, but somehow this is the perfect opening to the Everything experience.

Before I truly knew what was happening, I transformed into a black bear in the center of a big forest. When it was time to move my character across the screen, I was delighted to find that, rather than walking, the bear rotated across the screen in 90° increments. It's tough to explain, but it makes every movement hilarious. Check out the launch trailer below to see what I mean.

Traversing through the forest, I discovered that many other animals moved in this fashion. I encountered tumbling orangutans, squirrels and wolves. But I soon discovered the game wasn't just about its living things. Everything I could see in this world, from blades of grass to mountains and trees were thinking their own thoughts. I approached to listen to them, and their ideas ranged from inspiring and thoughtful to totally bleak. 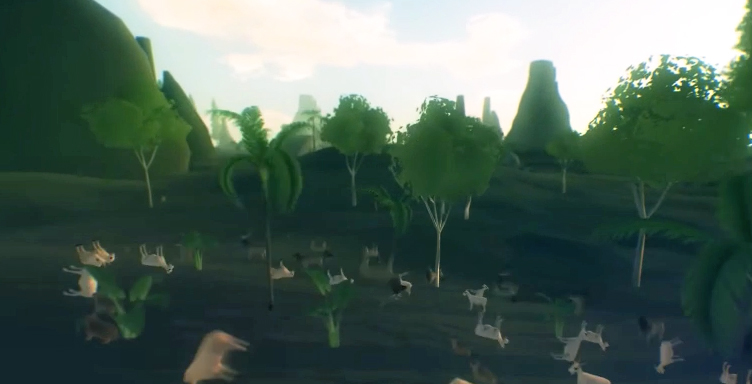 Once I'd gathered enough of these thoughts, I also learned more about what I was able to do in the game. I learned to sing a special bear song and group together with other bears to form a massive rolling bear pack. Later, I learned to dance to form more of me.

But things got really interesting when a rock asked me to consider a different perspective. I learned to "descend" by having my consciousness enter a nearby sheep. Now, rather than the bear, I controlled the sheep. Soon, I had descended even lower, inhabiting a blade of grass.

Every time my consciousness moved, that thing was added to an encyclopedia of characters stored in the pause menu. To discover more about those things I could read thorough descriptions listed there. It quickly became apparent that cataloguing every one of the game's things would be a massive undertaking. 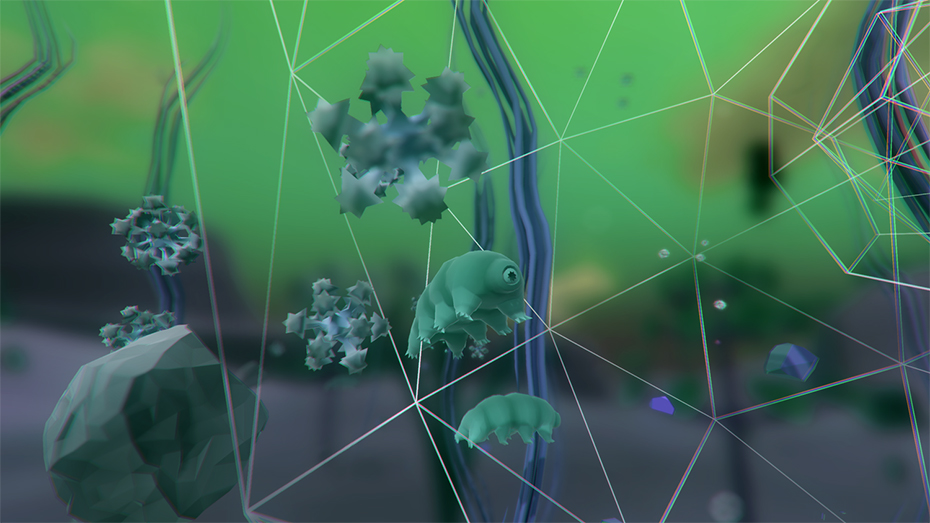 At this point the game gave me the opportunity to ascend and inhabit bigger objects, but I wanted to continue my descent. Before I knew it, I was floating around in a microscopic environment, where dust mites were giants and I took on the forms of bacteria and pollen grains. When I became a single atom of nitrogen, I thought I couldn't get any tinier, but descending took me into an incredible abstract world.

In this spacey area full of neon grids and strange shapes, everything appeared warped. I took on the forms of abstract concepts like spheres and fancy polyhedrons. Sprinkled throughout this world, I also ran into special thoughts that triggered audio clips about what it means to exist.

This narration comes from talks by the British philosopher Alan Watts. Whether you find his discussions deeply profound or utter nonsense will be up to you, but regardless they're a perfect match for the wacky but philosophical gameplay that surrounds it. 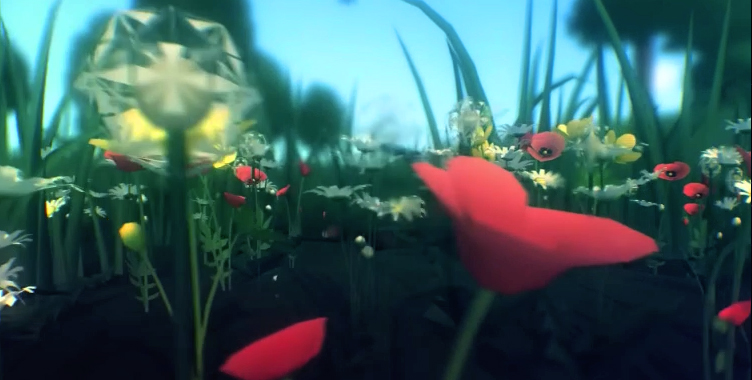 Once I'd escaped the void and made my way back into nitrogen, I decided it was time to ascend. I made my way back to the grassy forest floor and became a flower, then inhabited an alligator and a boulder and then a tree. From there, I became a continent, then the Earth itself. 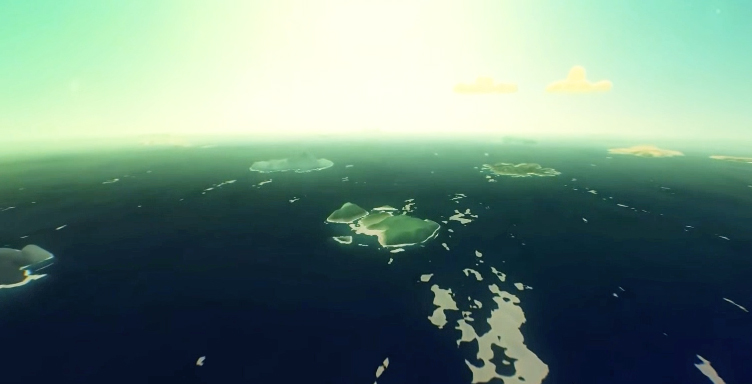 Your path in Everything depends entirely on the choices you make. From the Earth, you can become the surrounding planets, or even become a sun before ascending to become planetary systems, then star clusters, then galaxies. From here, you can ascend back to the void or descend again into an entirely new galaxy, with its own planets, before descending again onto a whole new planet to encounter all-new environments full of even more things to discover and inhabit. 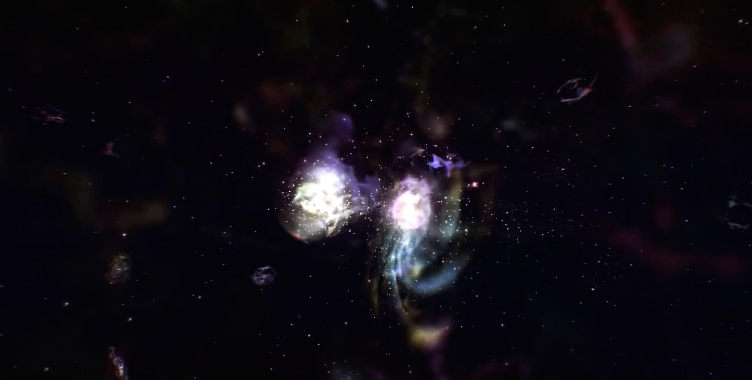 At one point in the game, you'll be asked to return to a golden gate near where you started your Everything journey. Remembering precisely where this was and making your way all the way back is an adventure in itself. But once you find the gate again and descend within, you find yourself in a colorful, bizarre world filled with every imaginable type of item in all kinds of scales. Boots mind encircle dancing bananas, and different colored sets of alphabet blocks fill the sky.

At first, this world seems enchanted and magical, but as you start to listen to the thoughts of the objects that live here, you soon discover that they're trapped in this world, and they have many regrets about the decisions they've made to lead them there. You're trapped too, unable to ascend back to the world beyond, so you'll need to utilize some clever thinking to make your escape. Once you do, you're rewarded with even more powers. And that's just the tutorial segment of the game.

So what exactly is the point of Everything? Whatever you make it out to be. Maybe you want to discover the thoughts of as many objects as possible, or unlock every one of Alan Watts' reflective speeches. Perhaps you'd like to explore every one of the game's unique planets and fill in your entire encyclopedia with the game's strange characters. 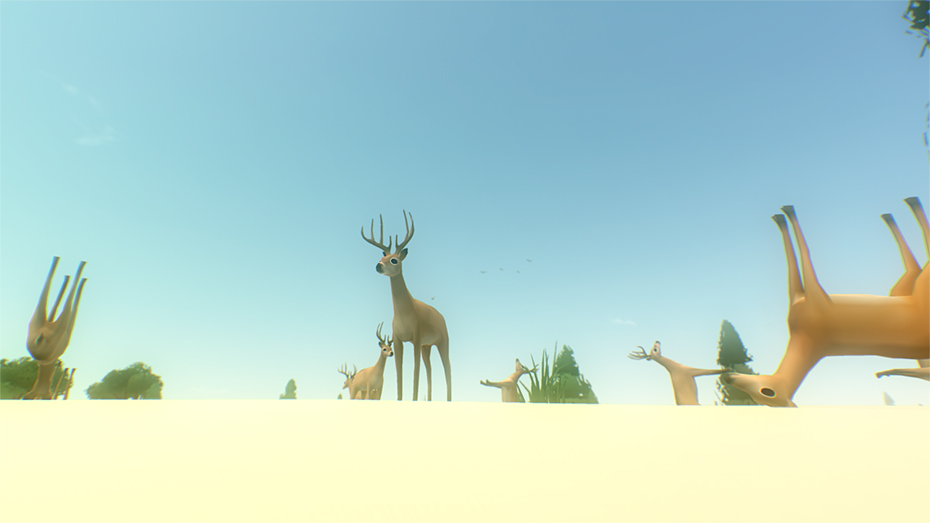 The former is how I plan to complete Everything Game, but it's going to take me a long, long time to do so. I've played many hours of this game, but I feel there are still a ton of strange, wonderful things to discover. I've barely even scratched the surface.

If bizarre humor and philosophy are the last things you're looking for in a video game, Everything Game probably won't be for you, but if you're willing to keep an open mind and appreciate the journey rather than the destination, it might just resonate with you in a way no game has before.

Looking for more thoughtful games to add to your library? Click HERE to find out what we thought of the new game What Remains of Edith Finch.