We Put Fabalish's Unusual Chickpea Blondies to the Test

If you've been reading my content for long, you know I'm always up for trying unusual new varieties of desserts—bonus points if they also happen to be "healthy."

Fabalish's Chickpea Blondies are the latest delectable oddity to catch my eye. They're blondies (like a cross between a chocolate chip cookie and a brownie) made with chickpeas instead of all of the usual stuff that goes into the baked treat. When the team behind them asked if I'd be interested in trying them ahead of Valentine's Day, I simply couldn't refuse, and here's what I discovered when I tried them:

Fabalish's mission statement is to reinvent traditional treats with a healthy chickpea twist. All of their products are made with chickpeas (also known as garbanzo beans) or aquafaba, the superfood liquid created when chickpeas are boiled in water. Their products included baked falafels, vegan tzatziki and smoked spices, but of all their products, I was most interested in their Chickpea Blondie.

Fabalish's unique blondies are made with chickpeas instead of flour, eggs or dairy, like most other cookies out there. They're also free of soy, gluten, nuts and preservatives, and are completely vegan. They're packed with fair trade organic chocolate chips and sweetened with organic maple syrup and organic coconut sugar. Because they're made with chickpeas, they're also full of protein, fiber, iron and antioxidants, as well as calcium and potassium. The addition of sunflower oil also lends oleic fatty acid and vitamin E. They're sold in seven-ounce packages, each holding a mega four-serving blondie, and though they're not yet available in stores, I can't wait for them to be.

When a pair of Fabilish Chocolate Chip Chickpea Blondies arrived for me in a chilled package, I didn't waste any time before I opened up my first serving and dug in. 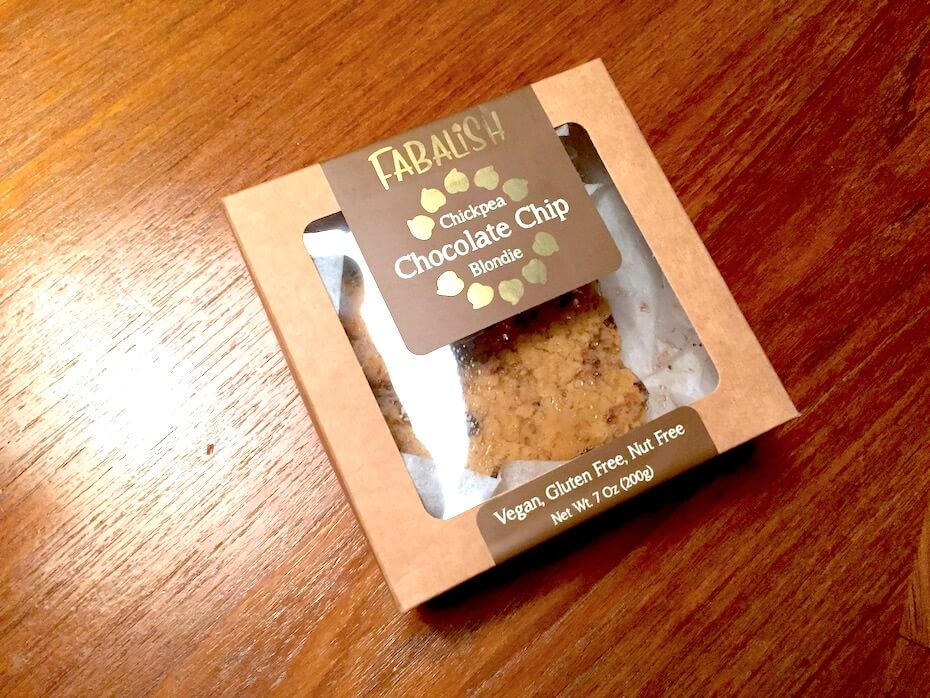 I quickly realized that it didn't have the sturdiness of a traditional brownie, and decided that taking bites with a fork would be my best bet. The texture was ultra crumbly, but not at all dry, and when I took my first bite, I was surprised at how much the flavor really did ring true as a delicious chocolate chip cookie.

Though it wasn't super full of chocolate chips, I got a few in every soft bite, and the overall blondie had just the right amount of sweetness. As much as I don't want to liken the texture to hardened hummus, that's what it evokes. That might not sound good, but strangely, it works. I imagine some people won't be able to put aside the unusual chickpea texture of this dessert, but thinking of it as a cookie dough treat might help. 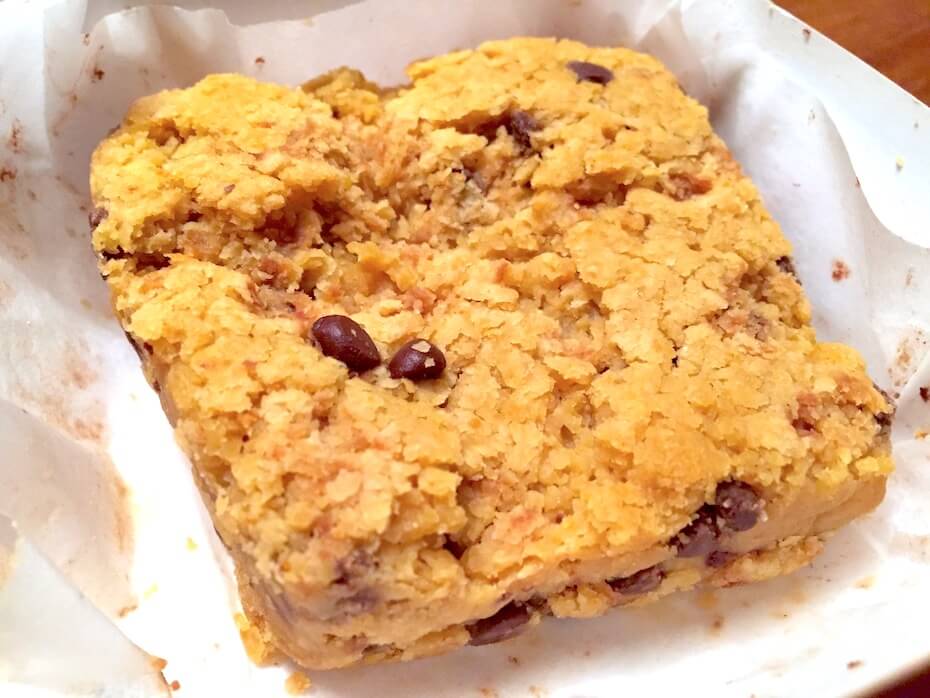 I shared a couple of bites with others who agreed with me that it tasted a lot better than it sounded, and then I chowed down on the rest of it by myself. Only after that did I look at the packaging and realize that I'd just consumed almost four full 150-calorie servings of the stuff, totaling up 600 calories. The back suggests the blondie is designed to "give yourself the nutrient packed calories to get through the day." Oops. Still, I didn't regret it.

Fabalish's Chickpea Blondies may not be a low-calorie food, but they make up for it in tastiness, nutrition and the lack of not-so-good ingredients. Their texture may not be for everyone, but if it doesn't bother you, you'll fall in love with the flavor, fast.

These blondies are not yet available in stores, but they're coming soon. Seeing as Fabalish's other products range from about $9 to $11 per package, I'm assuming they're not going to be inexpensive, but they'd be worth the splurge. They're decadent-tasting without actually being bad for you, and that's something I can get behind.