I only had to step into the room where Fall Guys: Ultimate Knockout was being demoed to completely fall in love with the game's art style. The furniture was made of giant foam play blocks wrapped in vinyl, and the walls were decorated with characters in charming costumes. They even made me take off my shoes before I stepped inside. 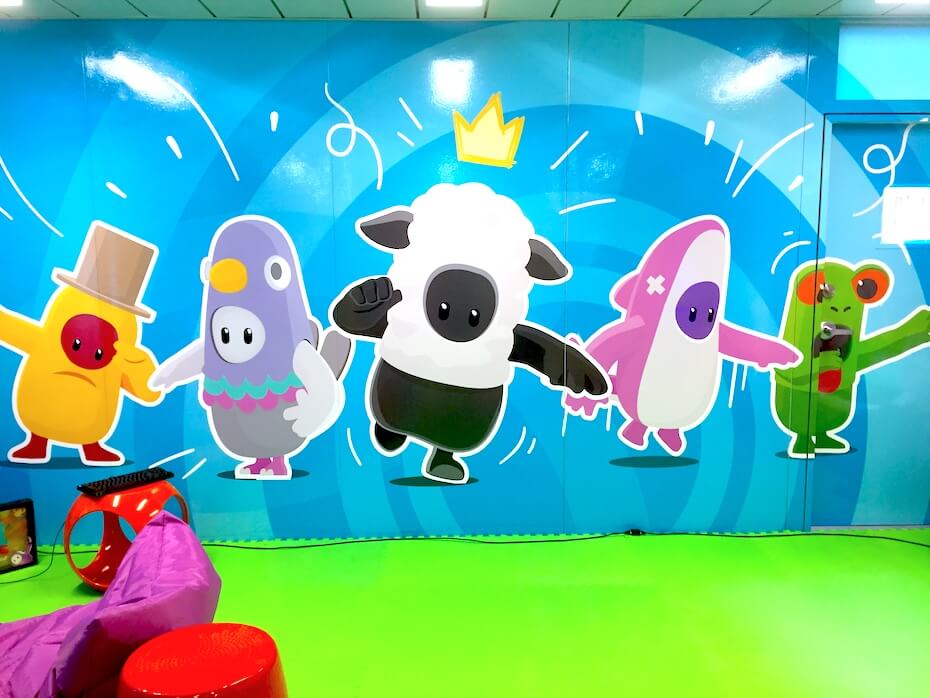 But after actually playing the game at Devolver Digital's lot outside E3, I'm even more convinced that it'll take over the gaming scene next year.

Fall Guys by Mediatonic combines the elements of an obstacle course game show with battle royale eliminations, ending with a single winner. Think Wipeout or Ninja Warrior, but with adorable creatures in silly costumes, and with up to 100 players at a time.

In this game, simplicity is key. You can run around, jump and do a hilarious dive move, as well as grab items or ledges. Every single action is delightful to watch, and I could barely see them toddle and bounce around without feeling a smile creep across my face.

I was able to get hands-on with the game, playing against three folks from Mediatonic, as well as 60 AI characters, to take on three challenges and see who might finally take first place. I began by selecting a character dressed in a costume resembling a cheerful watermelon. The characters can also be named, but since each of the name fields were already pre-populated with funny names like "Alex Applehat," I decided to leave that be. 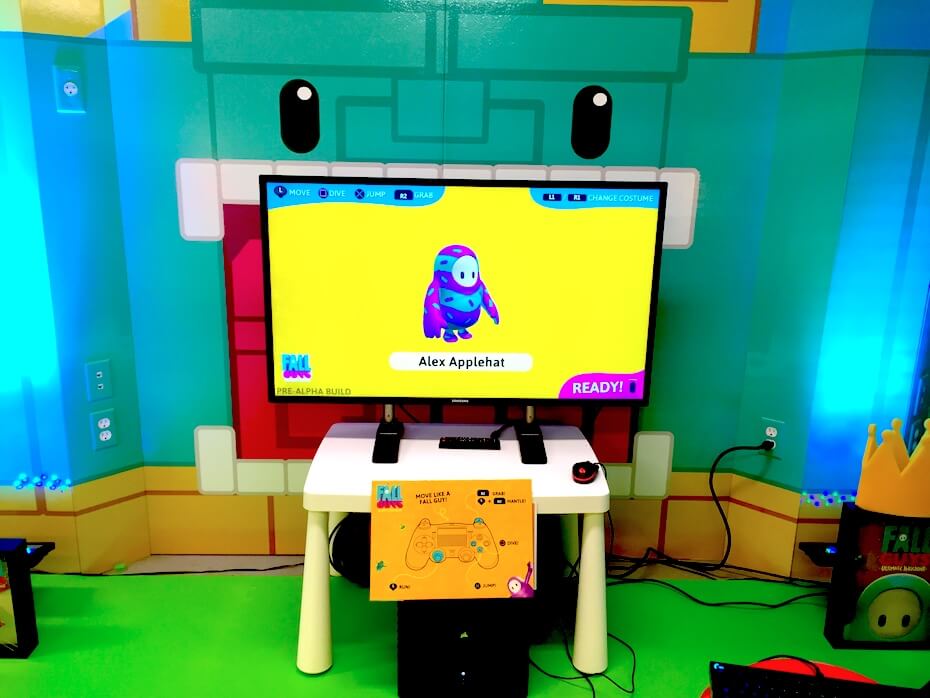 The first game was a simple race to the finish, except standing in our way were a series of wide walls decorated with "faces." To get through to the next area, the contestants had to try their luck, slamming into the mouth section of each face to see if it would conveniently break away or stop them cold in their tracks, forcing them to try another path. These "good" doors and "bad" are randomly generated every time, with more bad ones appearing at each new wall, so luck and strategy can play a huge role in being one of the first to make it to the finish. Once the race was complete, the bottom quarter or so of contestants were kicked out, and the rest of us were allowed to move on to round two. 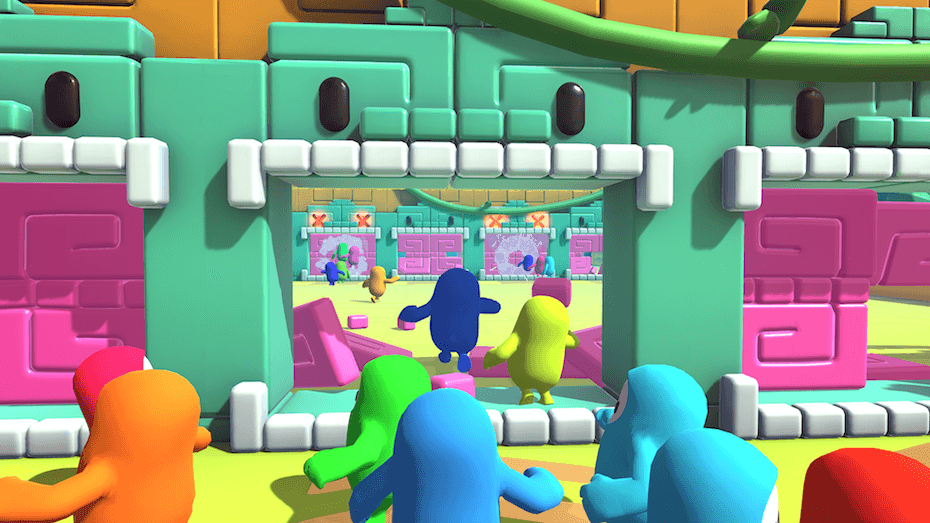 The second round was basically a capture-the-flag game, except instead of flags, everyone wanted to possess a valuable tail. It took place in a large room full of platforms and giant swinging mallets, with half of the players starting with tails, and the other half starting without. I began with a tail, so for the entire two-minute round, I ran around wildly, trying to evade the tailless foes who attempted to snatch the tail off my backside. When it did get snagged, I made sure to recover another as quickly as possible. When the time ran out, I was still tailed, so I got to progress while the half of us without tails got eliminated.

The third and final mini game was a mad dash up a mountain, with spinners, mallets and falling boulders working against the players' progress. At the very top was a floating crown, and whoever could make it up first and grab onto its edge would be the overall winner. During my first run through these three minigames, I just barely lost, with one of the creators of the game skirting ahead of me at the last second and grabbing the crown. However, when we played a second round, I managed to take first place. I had a ridiculous amount of fun in the process, and victory was sweet. 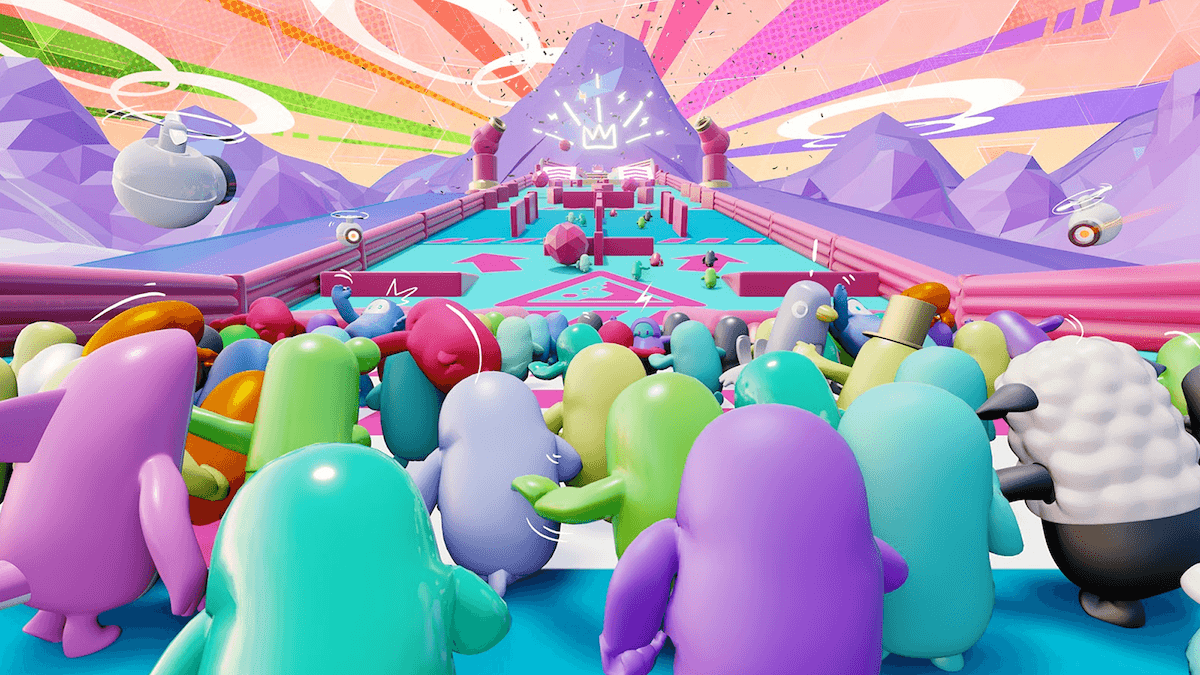 While I only had the chance to play three thrilling minigames during my time with Fall Guys, I was told there are plans to create 30 games or more in total so that every game feels fresh and exciting. They'll also be randomized every time, so that even those with more experience will always be on their toes.

And though I played against a lot of computer-controlled characters, I was told that in the final version, competitors will always be the real deal. At the Mediatonic offices, they've played with groups of up to 60, which sounds as chaotic as it does wonderful. It's set to release on PlayStation 4 and PC when it comes out in 2020, and I hope to continue my winning streak when that happens.

If you'd rather learn more about a competitive game you can play right this second, click HERE to learn about one of my favorite games from E3, Squish.