Given how easy it is to take amazing photos with your phone, you might think taking a big group photo with the whole family wouldn't be too much of a challenge. You'd be wrong.

If your family has ever had a tough time capturing a cute photo that represents every member, we bet you'll relate to each of these 10 struggles.

1. We're convinced it's impossible to capture an image of more than four people at once and to not have at least one set of closed eyes in the photo. Snapping a shot of the whole family? Forget about it.

2. If everyone manages to keep their eyes open, then someone will probably be making a weird face. It's likely that someone will also have an oddly untucked shirt, or their hair completely in their face or a big ketchup stain on their dress to ensure that the picture is just a little off.

3. In theory, taking a nice picture of everyone standing cozily in the living room should be a piece of cake. Everyone looks so nice in person— but unfortunately, that rarely translates to camera. There's never enough space for the photographer to back up and capture the group shot, making it a cramped fit for everyone in the frame.

4. For whatever reason, the urgency of taking a group photo seems to make people completely forget how to line up for one. As tall folks push to the front, the shorter ones find themselves tippy-toeing to even see the camera. Getting everyone back into a logical order then takes an extra couple of minutes—if that happens at all.

5. Someone short will inevitably find themselves behind someone who blocks them completely. Their unfortunate placement means their posing and smiling was in all in vain.

6. Getting every single family member in your pic is some kind of miracle. Usually, the person who insists on sitting out on the photo so they can take it is exactly the warm, kind-hearted person everyone wants to be in the shot with them. And even when you can convince the group to use a timer, someone will have randomly wandered off so that they're conspicuously missing. 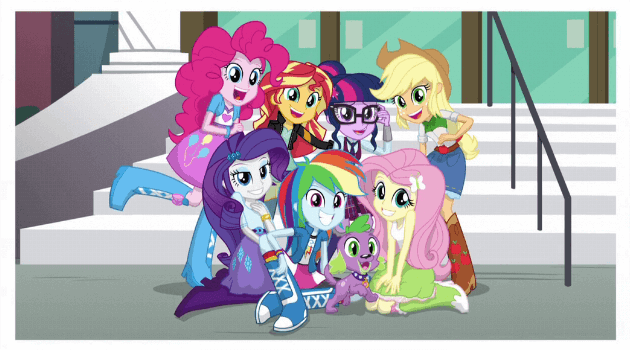 (My Little Pony: Friendship Is Magic via Discovery Family)

7. Using the timer on a phone's camera presents its own unique set of problems. Three seconds is rarely enough time for anyone to push the button before running into position, while 10 seconds provides so much time that no one is exactly sure when the photo will actually be snapped, resulting in confused expressions and open mouths. Not to mention that phones will inevitably fall down if they're propped up against random household objects.

8. More often than not, multiple people will demand to take their own versions of the same photo, despite the ease of sharing pics once they've been taken. Without fail, this will result in multi-camera confusion. With more than one person snapping away at the same time, each person in the photo will be looking every which way, and no one will get a single photo of everyone looking in the same direction.

9. Lightning is hard. Chances are, wherever your family is gathering for your special celebration, it isn't lit for picture-perfect photos. Things don't get any simpler when you take them outside. If everyone in the photo is facing bright sunlight, they'll all be squinting (or have their eyes closed) with dark shadows crossing over their faces. With their backs to the light, they'll appear washed out and dark against the vibrancy of the sun. Once it starts getting dark out, the photog will need to use their flash, and that's rarely flattering.

10. Even after it appears that every piece has fallen together and you've finally taken a successful photo, the image is never what you'd anticipated. In all likelihood, it'll look like everyone was posing for a different type of photo. You'll have neutral expressions among the smiles and silly faces next to somber ones. But at least you have the photo?

Just because your pics aren't flawless doesn't mean you shouldn't share them. Click HERE for the best Insta captions for pics from your family reunion.