You might think you know Albus Dumbledore, but there's still so much to learn about the beloved Harry Potter professor.

With Fantastic Beasts: The Crimes of Grindelwald bringing a young version of Dumbledore into our lives, we're rediscovering the character. Fortunately, we have the help of Jude Law, the actor who plays him. Jude recently chatted with Entertainment Weekly and revealed an intriguing piece of Dumbledore's past.

Harry Potter fans got to know Dumbledore as the headmaster of Hogwarts, a wise and warm mentor for the series' titular hero. Before that, though—long before Harry ever arrived at the school of witchcraft and wizardry—Dumbledore taught Transfiguration. And, it turns out, he once taught yet another subject, as we'll see in The Crimes of Grindelwald.

"At this stage in his career, he's not [teaching Transfiguration]," Jude told EW. "I'm not sure I'm allowed to say what he teaches…" 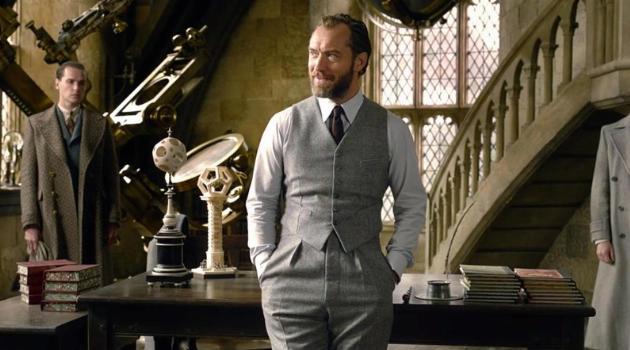 (Fantastic Beasts: The Crimes of Grindelwald via Warner Bros. Pictures)

Ooh, mysterious! The actor kept the secret on lockdown, but we have a theory: The subject in question could be Defense Against the Dark Arts. Dumbledore was an expert on the topic in his later years, after all, so he likely knew plenty about it during his early teaching, too. We don't have any guesses as to why he'd have moved over to Transfiguration, but the Defense Against the Dark Arts teaching position is known for having high turnover, so it could have happened.

Jude got to learn a lot more about Dumbledore than just what jobs are on his resume. The actor was lucky enough to sit down with the series' author, J.K. Rowling, after he was cast, and she made sure he was an expert on his character.

"She gave me a very good sense of Albus' life journey and who he was and what was happening in his head and his heart and his world for this particular story," Jude told EW.

We wish he'd spill a little more of that, but we can wait till the movie comes out since we have to. Fantastic Beasts: The Crimes of Grindelwald opens Nov. 16.

If you're looking for more magic in your life, click HERE to find out which beast from Fantastic Beasts and Where to Find Them you are.