Fantasy Life for Nintendo 3DS lets players choose their own destinies! The role-playing game immerses players into the land of Reveria, where they can live out their roles through 12 different Life Classes, slaying monsters on the path to solving a crisis that threatens the region! 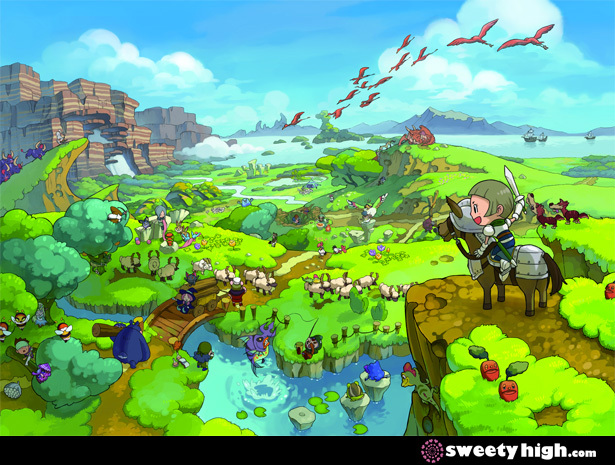 The game begins with your character arriving in the bustling castle city of Castele. After customizing your character, you quickly befriend a golden, talking butterfly, who'll aid you in your mission.

It rapidly becomes apparent that something is awry in Reveria. Mysterious stones fall from the sky, causing strange behavior in anyone, or anything, they touch. It's up to you to discover why!

Unlike most RPGs, Fantasy Life doesn't force you to be a fighter. Instead, players can pick from 12 different Life Classes that make for different gameplay experiences.

First are the four Life Classes that revolve around battle: Paladin, Mercenary, Hunter and Magician. While Paladins fight with one-handed swords and a shield, Mercenaries deal with two-handed claymores. Hunters utilize bows, while Magicians handle magic wands, summoning fire, water and air attacks, and healing themselves with earth magic.

Next are the gathering Lives. Anglers use rods to catch fish around Reveria. Woodcutters chop down trees to gather wood. Miners mine gemstones and precious metals from the earth.

Last up, five Life Classes focus on the creation of items. Cooks use gathered fish, meat and veggies to cook delicious and life-restoring concoctions, and Alchemists use various items to make valuable medicines, bombs and more. Blacksmiths work collected ore into weapons and armor, while Carpenters use wood to make fishing rods, magic wants and furniture. Lastly, the Tailor class creates clothing that boosts various stats, also giving players their own unique looks!

Along the way, you can choose to stick with one Life throughout the game, or switch between them. While playing as just one will allow you to quickly level up within that class, balancing them all will open up much bigger opportunities for stat growth.

As a Miner, you can mine for ore, which you can then work, as a Blacksmith, into a weapon, which you can use as a Paladin or Mercenary. Each Life Class is intertwined with the others. Ss you're adventuring, having licenses as an Angler, Woodcutter and Miner will help you collect all the resources you need!

Undergoing Life-specific quests will help you level up within each Life Class, which then grants you stat bonuses that will help in battle!

Throughout your adventures, you'll want to collect as many different items as you can, and accumulate as much of the Reveria currency, Dosh, as possible, easing your travels.

On your journey, you'll also run into many characters with specific requests. You can fulfill them, getting Dosh and goods in return.

To the south of Castele lies the East Grassy Plains, where you'll have your first battles. The land outside of the city is full of monsters, from massive dragons to howling wolves and animate vegetables. As you move into further areas, bad guys get harder to beat, and you'll have to improve your skills in order to defeat them.

Tougher baddies, as well as some ore deposits and special trees, also drop "bounties" which can be redeemed for Dosh, as well as useful items.

To progress through the game's storyline, fulfill the quests presented by your butterfly companion. They'll not only bring you closer to the next chapter, but  award you with Bliss, which unlocks handy features like the ability to upgrade your bag to hold more items, or the chance to own a pet!

One of the wonderful things about Fantasy Life is that you don't really need to play along with the story to enjoy the game. It allows you to choose your own adventure, and there are countless hours of gameplay in side quests, though certain areas can only be unlocked by progressing through the storyline.

The game comes from Level 5, the creators of the Professor Layton series, and they've done something really innovative with this title. It manages to blend elements from Animal Crossing, Harvest Moon and Final Fantasy titles into something entirely new, with an addicting quality that will keep fans playing for hours even after they promise to do "just one more quest…"

Though the dialogue, particularly in some of the Bliss quests, is sometimes overlong, the lines are well-written and engaging. The game features some beautifully animated cutscenes, and the normal gameplay's graphics are colorful and full of quirky and memorable characters.

We highly recommend the game to RPG fans of all ages, as it offers a gameplay experience that just keeps on giving, even once you've completed the main plot. If you're looking for something that you can play for hours and hours at a time, Fantasy Life is exactly the game for you!

Fantasy Life released across North America today, October 23! For even more game reviews, click here. You can also share your own favorite games and reviews with us at Sweety High!