Faye Carey is a teen from New Zealand with a passion for helping animals in need. Earlier this year, she even started her own pet adoption service called Animal Re-home Waikato, which finds dogs and cats new homes. 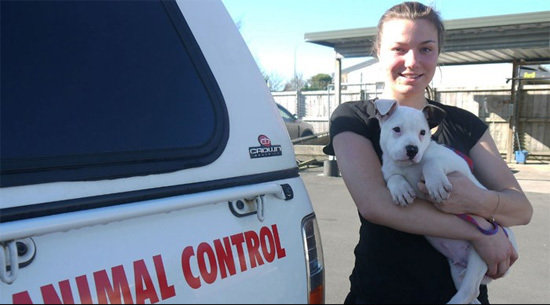 We chatted with Faye about how she first got involved with rehoming animals, and how she continues to evolve her organization to help even more animals who need homes!

Faye has always been a big fan of animals, and her family has always owned dogs. She and her twin sister also ride horses competitively.

At the end of last year, Faye's mother suggested that she go to the Waikato District Council Animal Control for some work experience.

"I originally had no idea what I wanted to do," Faye said.

During her first week of work experience with animal control, the center picked up a small puppy named Bruno.

"He was in the pound for a few days and I felt so sorry for him." Faye said. "I decided to advertise him on the Trade Me website and he got a lot of interest!"

Trade Me is a New Zealand website designed to help people trade, sell, and buy everything from clothing and tractors to livestock. Faye also found it was a good place to advertise puppies that need homes.

"He went to a lovely family a week later, who have a big section in Auckland and still love him to pieces," Faye said.

Faye deeply enjoyed her time at animal control, and ended up learning a lot from the staff about the needs of pets and other animals.

"I am very grateful for the time they have spent with me and I enjoy dealing with the community whist enjoying the time I spend with the dogs at the pound," she said.

Though Faye found that it was difficult to give Bruno away, she gained a valuable life experience from the event.

"The first puppy I re-homed was very hard to let go of, as I build quite a strong relationship with the dog," Faye said. "He would do anything for me and I would do the same for him."

Bruno is now the face of Faye's organization, Animal Re-home Waikato. He appears in their profile image on Facebook alongside Faye's friend, Emily.

Now, Faye understands how important it is to find homes for these dogs, and that makes it a little easier to say bye to them when they are being adopted.

"The reality is that they are all going to suitable loving homes that love them all as much as I do," Faye said. "I am constantly receiving updates on our Facebook page from the families of the dogs that have been adopted, which is really awesome and makes everything worthwhile.

After her work at the animal control center, Faye knew immediately that she wanted to keep re-homing pound dogs.

"It felt so good knowing that I had achieved something which had made such a big difference," she said.

The dogs that Faye finds homes for have usually been dumped, surrendered, or picked up by the animal control team and never claimed by their owners.

"They come from the pound, so it is up to me to train and look after them until they find their forever homes," she said.

These adopted dogs get spayed and neutered, registered and micro-chipped, and treated for worms and fleas when they find a home.

Since November 2012, Faye has re-homed 89 dogs and puppies, and about 20 kittens. These numbers are constantly on the rise.

"The most rewarding part is when I see each puppy or kitten being adopted and going to a new, loving home—an opportunity they may never have had otherwise," Faye said.

Besides re-homing animals, Faye also enjoys shopping, horse-riding, and sports. She manages to keep her volunteering for animals going, despite her busy lifestyle.

"It can get a bit stressful trying to juggle schoolwork, chores, my own animals at home and the work I do for the pound, but somehow I manage it," she said. "I think it is easy for me to do my work as I am so dedicated to helping these animals!"

Faye plans to continue Animal Re-home Waikato, but was also recently accepted into Unitec Institute of Technology at the Mt. Albert campus in Auckland, where she plans to get a diploma in animal welfare and investigations.

She then plans to pursue a career in animal control.

"I look up to the animal control officers that I work with because they have to deal with some pretty difficult situations, which can be quite unpleasant," Faye said. "It isn't an easy job but is very rewarding when you see the dogs go into nice homes."

She said she was also thankful to family, friends, the Waikato District Council, and many more for great support and advice that made her animal re-homing center possible.

"I do hope to expand Animal Re-home Waikato into a charity within the next year, that way we can save more animals!" she said.

Check out Animal Re-home Waikato on Facebook and show your support by clicking here!