While my diet is the furthest thing from gluten-free, over the years, I've been seriously impressed with some of the GF alternatives to my favorite foods. In fact, I'd say that some gluten-free options manage to be even better than the originals.

Still, in my experience, pizza remains a challenging nut to crack, so when the team behind Feel Good Foods reached out to me and asked if I'd be interested in trying their new gluten-free, Detroit-style frozen square pan pizzas, I had to give them a fair shake. After trying all three flavors, I can say they're the best gluten-free pizzas I've had—and maybe some of the best frozen pizzas I've had, too.

Feel Good Foods specializes in chef-inspired, better-for-you and gluten-free frozen foods that are just as tasty as the classics. They were developed after co-founder Vanessa was diagnosed with celiac disease and she made it her mission to craft recipes that would allow her to enjoy all of her favorite foods, minus the gluten.

Their products are always preservative-free with no artificial ingredients. They're also certified gluten-free and made with antibiotic-free proteins, cage-free eggs, and they work hard to include vegetarian and vegan options whenever possible.

Their pizzas are a recent addition to the line, sharing a gluten-free take on Detroit-style pan pizza. They can be purchased online or at local retailers, including Walmart, Safeway, Sprouts and more for around $10 each.

I usually start off a taste test with the most traditional version on offer, which is why I began this trial with the Four Cheese pizza. It came in a special sleeve to help it crisp up in the oven, and immediately I noticed that the tomato sauce wasn't under the cheese, like in a traditional pizza, but in two thick stripes down its surface. That seemed interesting, but I was more than happy to try it out. 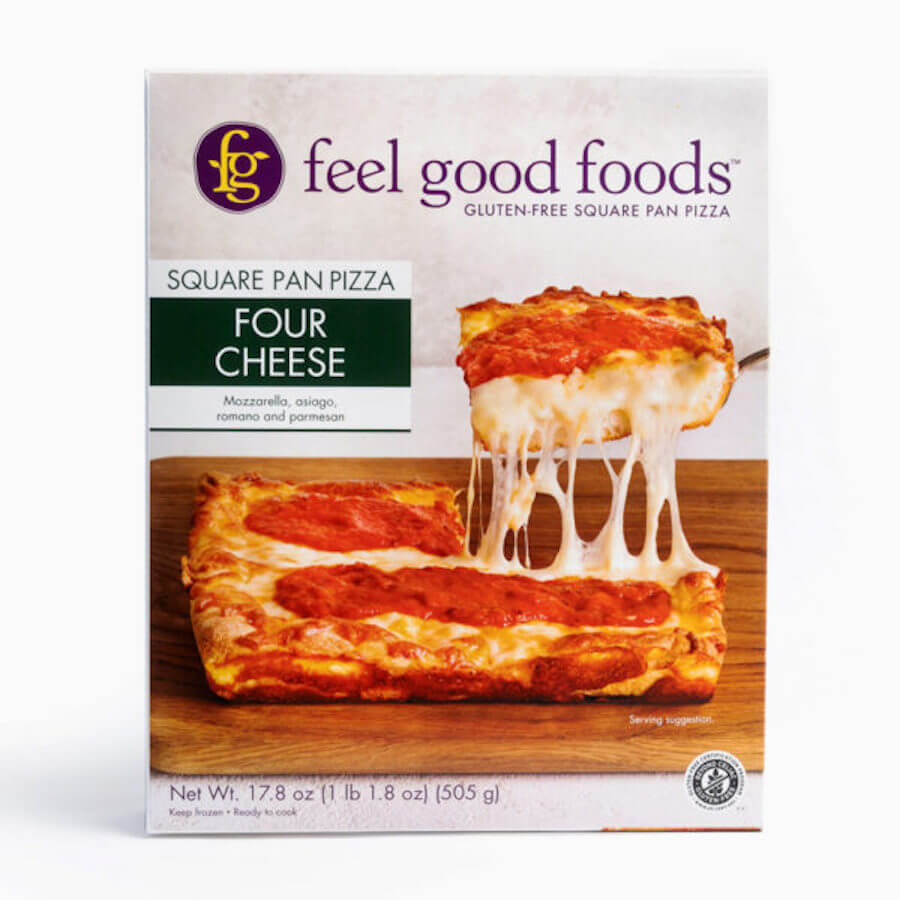 I preheated the oven to 425° and popped it in when it was ready before letting it sit for 26 minutes—after all, I like my pizza extra crispy, so I always leave it in for the maximum amount of time. When the pizza came out, it looked perfect. The crust on the outside looked thick and fluffy, and the cheese blend looked deliciously melty and gooey underneath the layers of tomato sauce.

I have to say I was shocked when I first bit in. The edges were crispy, while the interior of the crust was ridiculously buttery and fluffy, and the cheese blend and minimal sauce complemented them both so well. They were also thick and satisfying, making this a very generous size (technically four servings), at more than a pound of pizza per box. Even by sharing slices with family (who couldn't tell at all that it was gluten-free), I had leftovers. Lucky for me, they taste just as delicious reheated in the oven or air fryer the next day. 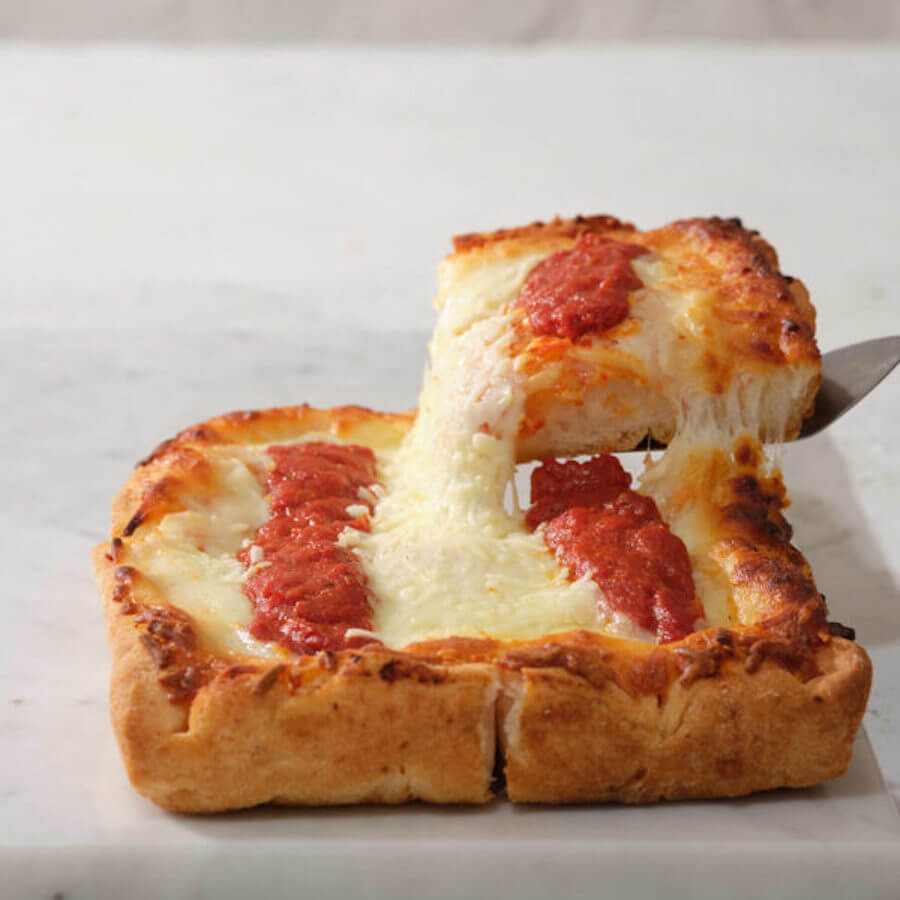 Next up, it was time to try the Margherita pizza. Margherita is typically a very simple pizza, topped with just tomatoes, mozzarella, basil and olive oil, so I wondered what Feel Good Foods' take would be. When I opened I box, I noticed the dollops of green pesto on top of the pizza and realized I was in for a treat. 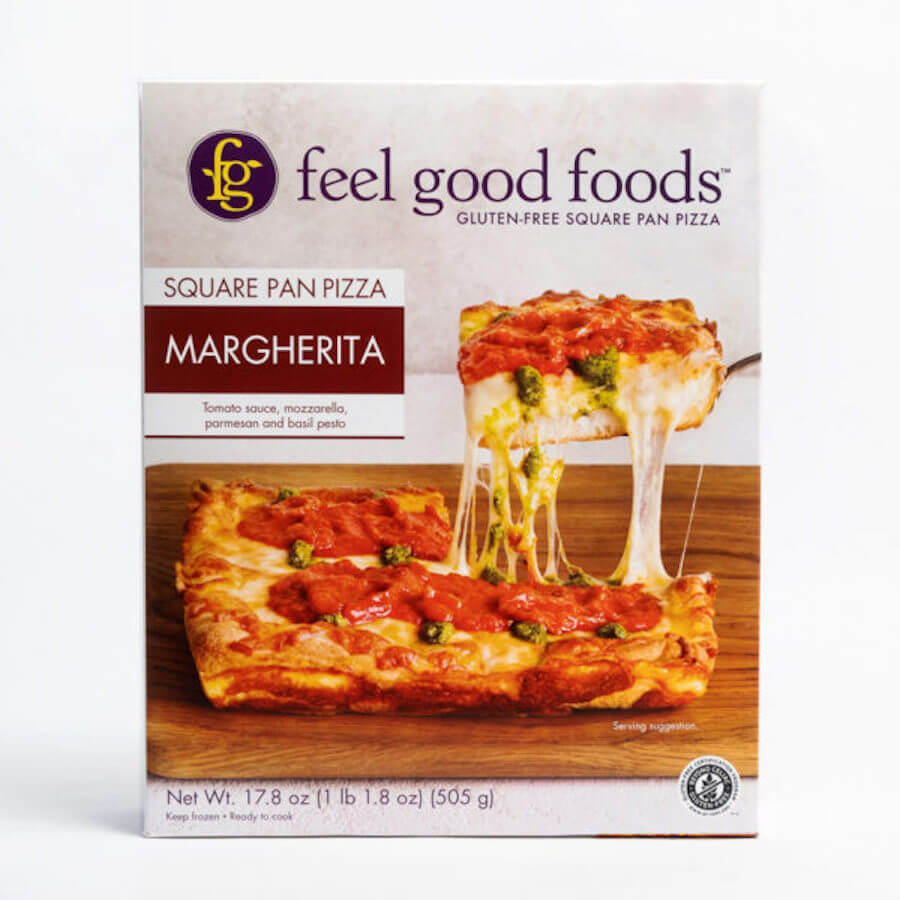 After this pizza's time in the oven, it came out just as crisp, airy and delicious as the previous pizza, but with the added benefit of the pesto, which took it above and beyond in terms of flavor. That pesto really did it for me with its bright, rich and herby taste. I thought that I'd been won over by the Four Cheese, but after eating this pizza, I decided this was the one I'd buy again and again in a heartbeat. 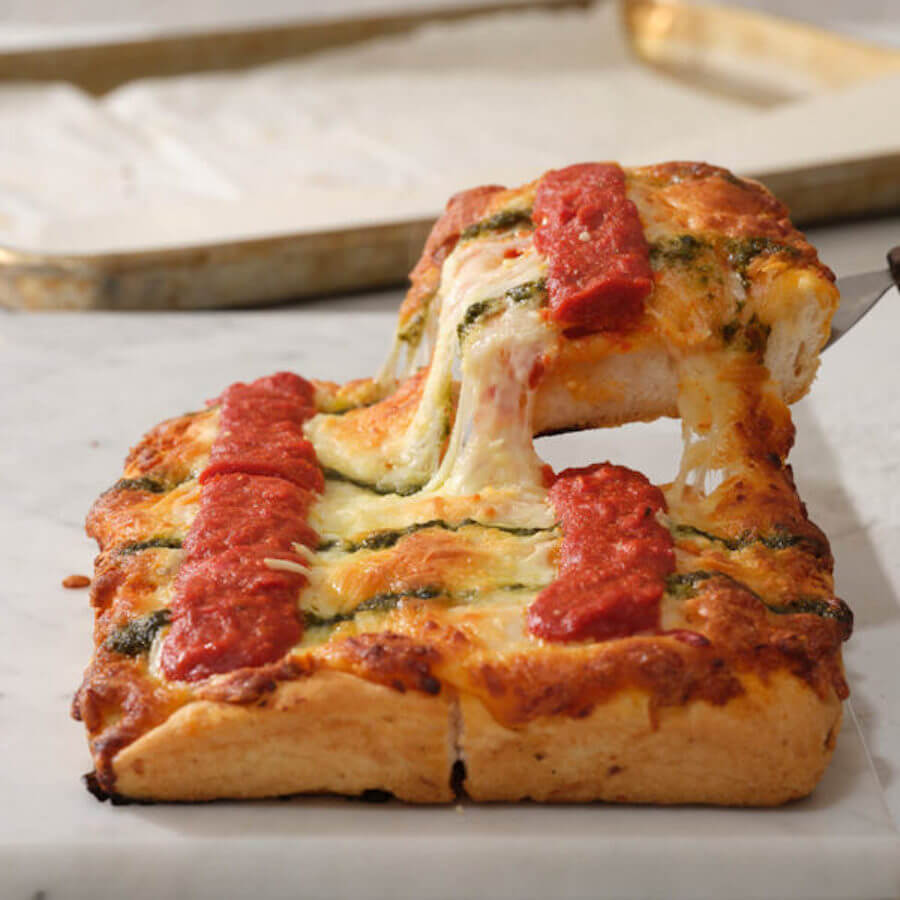 Last but not least was the Truffle Mushroom pizza, which definitely offered something a little bit different. Unlike the others, this one didn't have any tomato sauce, and was instead all about the cheesy topping, with a coat of very finely diced mushrooms. 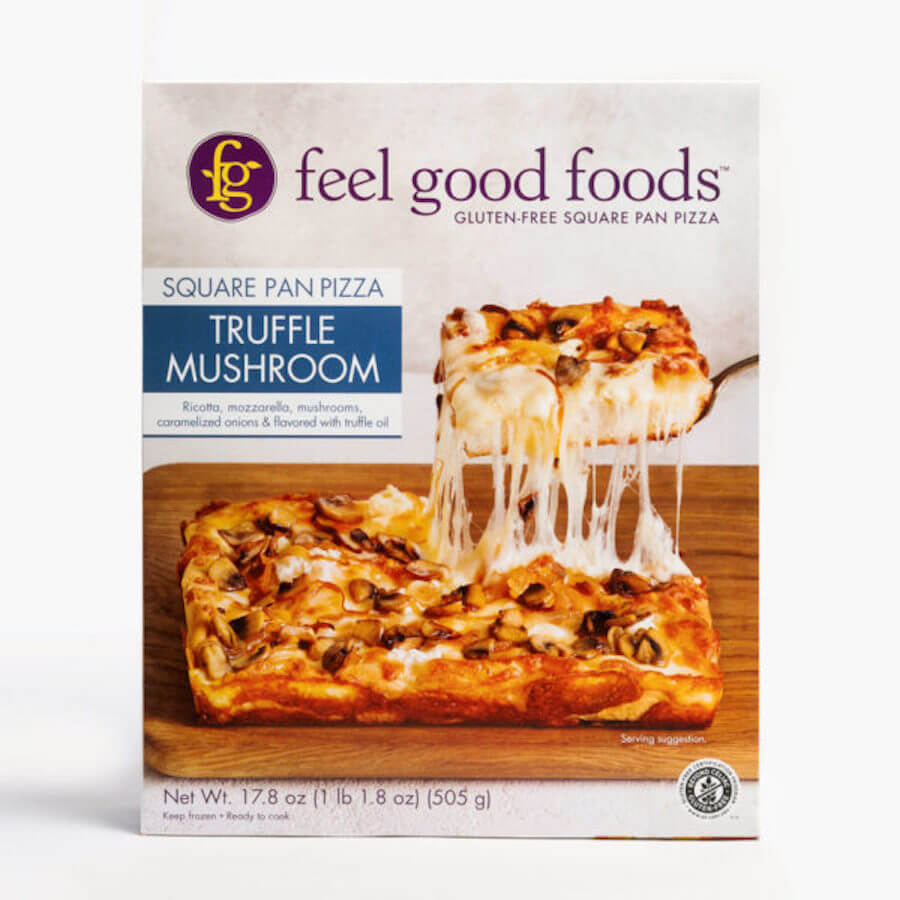 And while the puffy, fluffy and crisp crust was the same, this one offered an entirely unique experience. For one, the cheese was made up of a blend of both mozzarella and ricotta, making it extra rich with a thicker texture. The cheese itself also had a pungent mushroomy tang to it from the inclusion of truffle oil, which I loved—though if you find truffle oil overwhelming, I can't imagine you'd like this pizza too much. The flavor wonderfully complemented the bits of mushroom and caramelized onions also embedded in the cheese, and while the Margherita remained my favorite, this one came in at a close second. 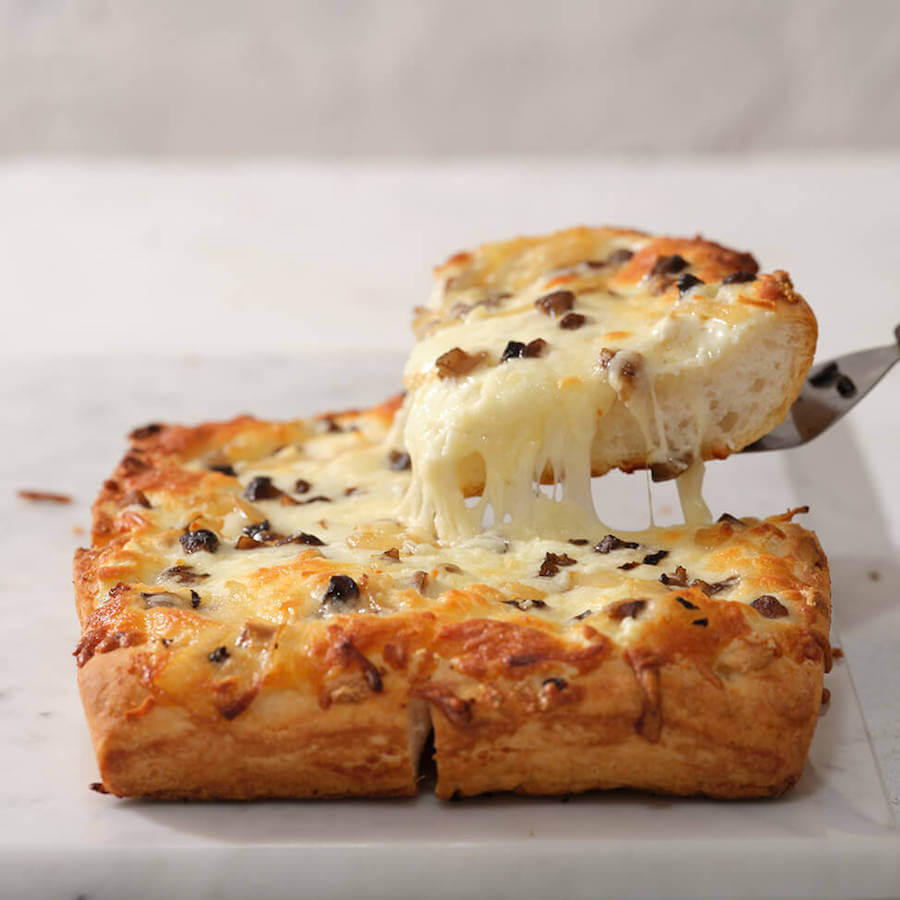 Whether your diet is gluten-free or not, I highly recommend Feel Good Foods' pan pizzas. You'd never guess from the flavor or texture that they're gluten-free, and the three vegetarian varieties each offer something a little different for pizza lovers of different tastes. Texture-wise, they're better than any other frozen pizza I've had. I just wish they had an option for meat-lovers, too. And at about $10 per pizza, with more than enough to split between two people, they're quite the deal, too.

Love frozen pizza in all its forms? Click HERE to find out why we're so obsessed with Snow Days pizza bites