A New Team Of All-Female Avengers Is Almost Here!

Big things are happening in the Marvel Universe, people! Marvel has assembled an all-female Avengers team. The female super group may just be a thing in the A-Force comics, but we have a feeling we'll be seeing them on the big screen sometime soon. Of course, we went ahead and cast the perfect girls for the job. Are you ready to get this film made, Disney? 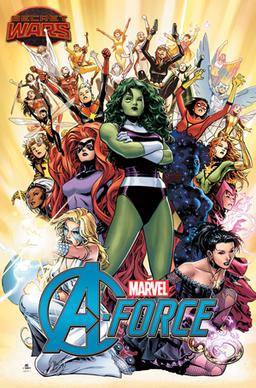 America Chavez is the headstrong female version of Captain America. Hunger Games actress Amandla Stenberg would be perfect for the role.

She-Hulk, the Hulk's way cooler cousin, is the leader of the A-Force team. This powerful lady could only be played by the butt-kicking Shay Mitchell.

Dazzler is a 1980s disco queen who gets her power from sound vibrations. Ashley Benson could bring all the fierceness to this super heroine.

Medusa is the Queen of the Inhumans (and totally wins the hair game.) How rad would Shailene Woodley look rocking those gorgeous red locks?

Nico Minoru is one magical girl with a ton of attitude. Only Katy Perry could bring this character to life.

Are you excited for the female-led Avengers? Share your thoughts with us in the comments below and don't forget to tell us who you would cast as the A-Force characters at Sweety High.