9 Things to Expect at Your First College Football Game

College football season is officially upon us!

Whether you're in college, high school or none of the above, no one's out of place at a good ol' college football game. They're an energetic, all-ages experience perfect for bonding with friends, family, alum—you name it.

But if you've never entered this crazy environment (filled with even crazier fans), you may be a little nervous. Fear not, as we're breaking down nine things to expect at your first college football game.

1. Everyone Has a Side

Not everyone who goes to the games eats, sleeps and breathes football, but even if you're only there to socialize with friends or because someone in your family dragged you out, you absolutely need to pick a side. No one at an Oregon Ducks/USC Trojans game, for example, is showing up wearing jeans and a pink tee. No matter your level of interest in the sport, you must pick a side—and make it known by matching your outfit to that preferred school's colors.

You know how you feel when you're playing a sport and you make an error that plays a big role in the turnout of a game? Imagine feeling that way when you're not playing! Win or lose, college football games are very emotional experiences. If your team wins, it's almost like you're the one who led them to victory. Whereas, if your team loses, everyone close to you knows to steer clear for the next 24 hours, because you're mad at the world for doing you so wrong.

3. Tailgating Is the Best Part

Especially if you don't care about the actual sport, tailgating, my friend, is where it's at. What's more fun than firing up the grill, blaring music, and mingling with friends and strangers who are all in a good mood? This is the part that goes down before the actual game, itself, and it's a great way to let loose before things get serious.

THANK YOU to everyone who made the #Trojantailgate a success!!! We got that juice????⚫️ #trojansontop

4. Fans Can Get Rowdy

Remember No. 2, about how people take these games so, so seriously? Well, it's no laughing matter to many, and these fans can get volatile. Don't be surprised if you have to close your ears a few times because of the profanities being hurled in your direction by some old dude behind you who feels his favorite player was wronged.

5. You Can Make New Friends

Above all else, college football games really are a social experience—more so than many other sports (especially college ones). Even cliquey people are friendly and easy to mingle with. At the end of the day, everyone rooting for a team is there for the same reason, so it's a really easy way to bond with others. 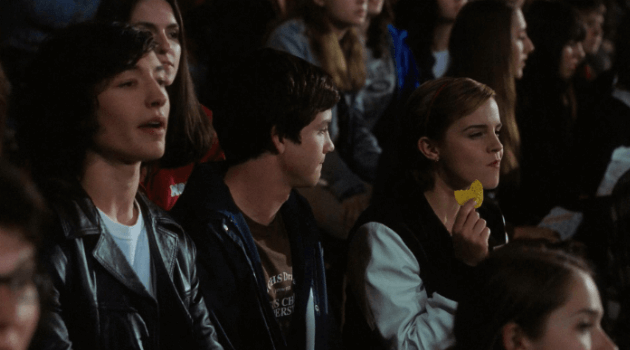 (Perks of Being a Wallflower via Summit Entertainment)

6. You'll Be Hated on If You Root for the Visiting Team

If you plan to confidently wear colors of the opposing team, you need to go into it expecting some backlash. People are passionate about their home schools (and rightfully so!), so if you go in rooting against them, it will cause a stir. Just be sure to sit on the correct side, because if you sit on the same side as the team you're rooting against, bad, bad things can happen!

7. A Lot of the People There Don't Actually Know What's Going On

If your hesitation to attend a game stems from not knowing anything about football, don't stress for a second. Truth be told, a lot of the people there are uninformed and only go to hang out with their crush, meet new people, or simply try to embrace school spirit. Now, of course, there will be actual diehard football fans, but just because you aren't one of them doesn't mean you'll be banned from the bleachers. Just be sure to clap and get excited when your team scores.

8. Halftime Is Your Time

If tailgating is our fave part of the college football experience, place halftime in 2nd. You have 20 minutes to catch up with pals, vent about the game, grab a refill on that lemonade, and make the necessary bathroom trip. But lest we forget, you'll also get to watch some pretty awesome cheerleading moves—we love a good stunt!

Don't let the warmish daytime weather fool you—by early evening, things are bound to get chilly, regardless of where you live. Come prepared with at least a sweatshirt, if not a scarf as well. Worst case scenario, you don't end up needing them. Schlepping them around, however, sure beats freezing and hating every moment of your experience.

If you aren't into sports but you are into fitness, HERE's the workout you should try, based on your zodiac sign.