When it comes to work, our parents tell us it can kind of be a drag, there are good days and bad days, days will be long, be sure to fall into a career you love and so on and so on…

But when it comes to landing our very first high school job, we are not thinking long-term. We are thinking "I'll finally have a paycheck, I'll make new friends and I'll get free (or heavily discounted) stuff."

In other words, anything with the word "job" associated with it sounds exciting—until it isn't (well, at least in my particular case). 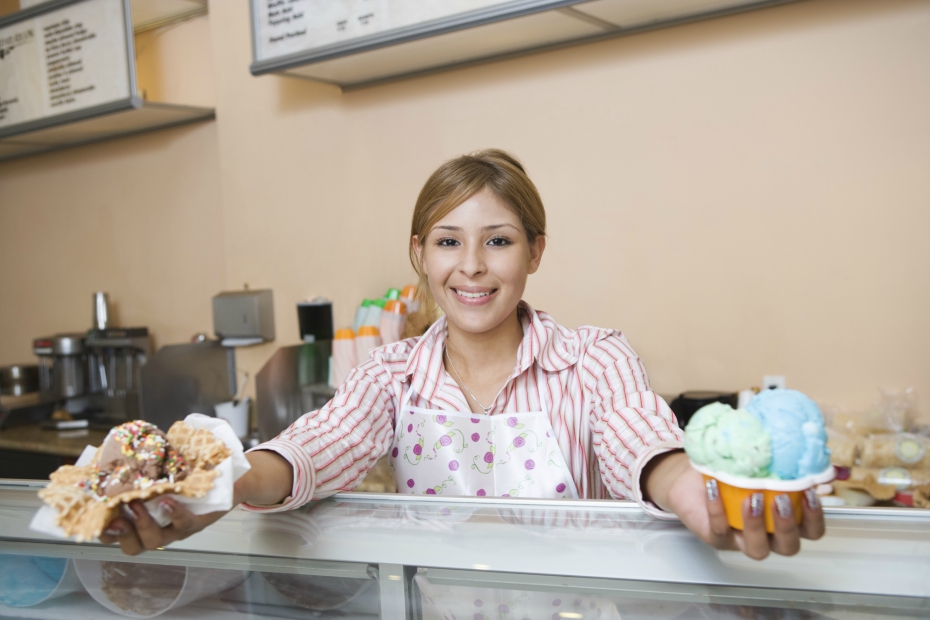 Having your first part-time job requires a work permit for anyone under 18. Most people who start working before the legal age usually begin at 16 or 17. I was 16 and a junior in high school when I first got behind a counter for pay.

My parents never pressured me to start working, but as I noticed more and more of my peers scoring their first-time gigs, the concept kind of sounded fun—almost like a hobby, even.

You see the same people at school day after day, which can get a little tiresome. Why not mingle with a fresh set of folks? New friendships can develop—heck, even new crushes. And I liked the idea of being able to potentially say, like, "Oh yeah, I work at *insert place of employment here*."

Luckily (or maybe not so luckily), my mom always had her rotation of regularly visited food joints, grocery stores and shops, and it just so happened she was pretty friendly with the owner of an ice cream shop 20 minutes from our house. After some back and forth discussion, my mom said the owner *Wayne wanted to meet with me about potential employment. The place is a well-known chain, so it sounded kind of exciting to have my first job be somewhere common that everyone would know.

Wayne and I chatted after school one Tuesday afternoon, I filled out an application and the rest is history. 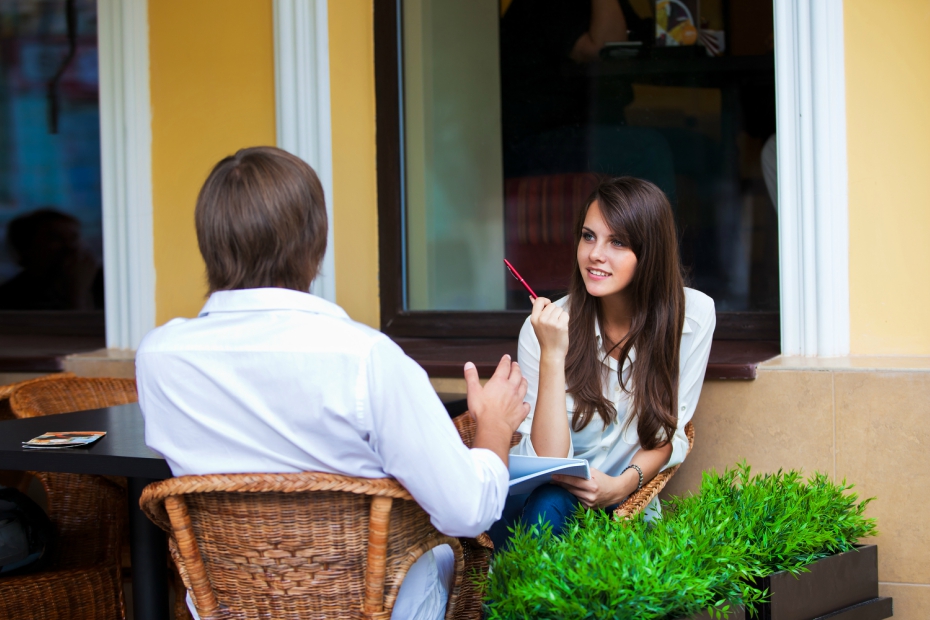 And So Began My Life As a "Trainiee"

My first day on the job was basically the last day of my social life.

The excitement leading up to throwing on the heavily soiled, thin, two-piece known as my uniform faded incredibly fast.

The good news: There was a really cool girl on staff with me named *Cathleen who I became friends with in no time, and there were a few troublesome-yet-entertaining boys from my school who worked there as well.

The bad news: Everything else.

Once I filled out any additional necessary paperwork and threw on the ever-so-unflattering ensemble, I was also handed a name tag with big bold letters that read "TRAINIEE." Not only was "TRAINEE" spelled wrong, but the said title implied that I had not passed the necessary "training" required to make minimum wage. Yes, you read that correctly. I did not make minimum wage. This was not an internship. This was a legitimate part-time job that required me to do everything any "non-trainee" had to do—I just had the luxury of making $1.75 an hour less than them.

As if the absurdities weren't already enough, within a week of employment, I was scrubbing floors and getting my bare hands into the depths of the toilets to make sure they were crystal clear. I mean, there are photos my best friend would take while cruising through the shop's parking lot, capturing me on my hands and knees, not missing a single little crevice in this terribly dirty tile. Sure, ensuring ice cream was appropriately applied to a cone was part of the schtick, but that wasn't necessarily any easier because Wayne was sure to catch our every move on video tape.

If a cone was filled even a centimeter over the "guidelines," we were taken into the back room of the store for a talking-to. One thing that cheapskate clearly didn't need to spend money on was glasses, because he sure had a way of spotting everything on video, eagle-eye status. That being said, you can only imagine how things went down when we took advantage of the discount we were allotted as employees. We were only allowed a very specific serving of toppings—and again, if the ice cream went even slightly over the cone, another talking-to came in no time.

Aside from the grueling work responsibilities, the hours were bewildering. By law, minors can only work a certain amount of hours per week. You better believe on a weekend, we did not get out of our chilly little shack until anywhere from midnight to 1:30 a.m. I was always so grateful for shifts I covered alongside Cathleen because by the time we'd get off, we would at least have each other if we still had the energy to hang out. 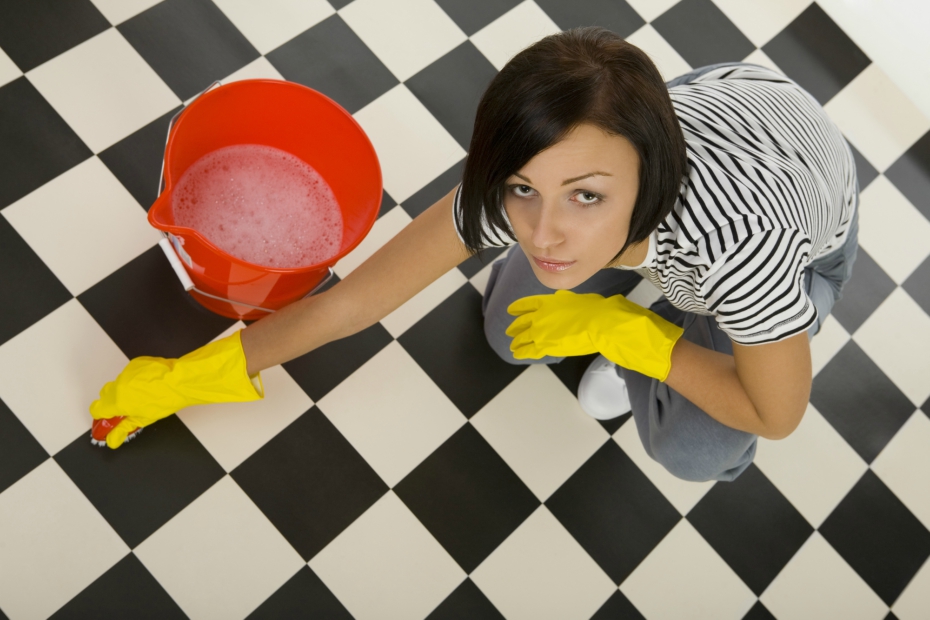 Sometimes It's Okay to Be a Quitter

With vacations and other time off included, I probably worked at this place for a total span of six months. Sounds like an eternity, right? Sure felt like one, too.

While times with Cathleen and some of the other employees made for good laughs, I finally got to a point where I craved greener pastures. Everyone says the grass is always greener on the other side, but I knew for sure nothing could be worse than this. And so the day came—I quit.

I don't remember if there was one specific moment that set me off. I do remember that I just started senior year at this point, and I kind of wanted to shed myself of this horrible job cloud looming over me. I finally got my license and I kind of felt like a different person.

I left Wayne a note one day at the beginning of my shift that simply stated I was putting in my two weeks notice. He approached me once he got in that day and I straight up said, "I think I want to do something else." He asked why, and I said, "Well, I'm not even making minimum wage here." He shrugged in agreement. I mean, what else could he do?

As soon as we were clear on my future intentions with the store, he immediately took away all my pre-scheduled shifts. It was an immature move on his part, but quite frankly, it was a blessing in disguise. By that point, I was totally O-V-E-R it!

In a way, I felt like this so-called "job" was holding me captive and the day I was able to say goodbye felt incredibly freeing. As for my next "career" move, I knew I needed a moment before hopping back into the workforce, and that was okay. 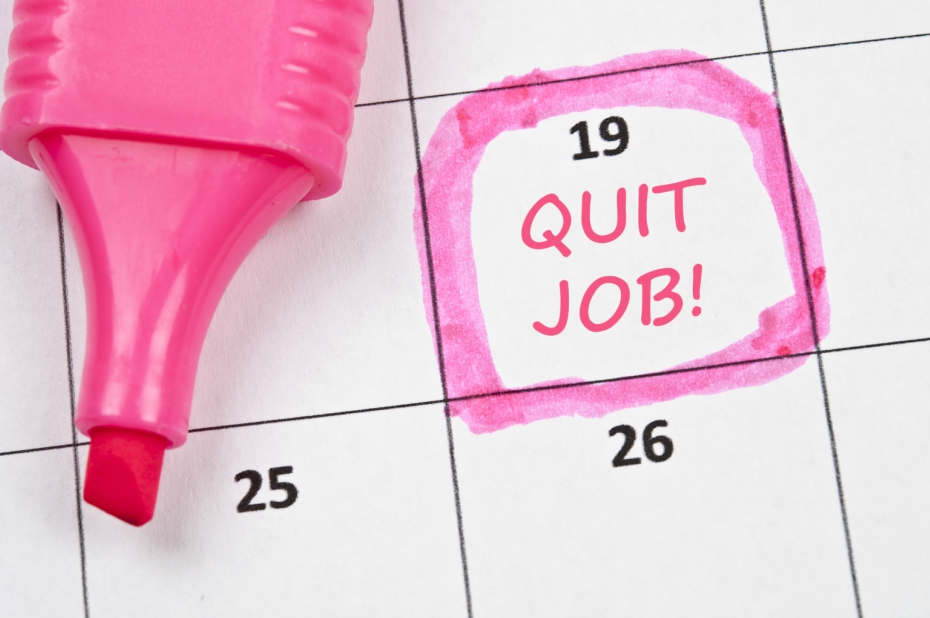 The only time I reflect on this miserable era in my life is basically to laugh. And that's kind of all you really can do in these instances.

Do I regret working under these undesirable conditions? Absolutely not. I wanted a job at the time, I had some memorable (for better or worse) experiences during my time there and it really allowed me to appreciate future job opportunities that came my way once I decided to get back out there.

I feel like having a terrible first job is kind of a rite of passage in a way. You'll always remember that experience and then someday, when you're legitimately doing what you want in life, you can look back on your humble beginnings (always thinking with the glass half full over here ????).

But on the flip side, do I regret quitting? No way. I was being treated poorly and unprofessionally. I gave the experience adequate time to really make up my mind, and then came to the conclusion that this situation was only bringing me down.

Why I stayed so long is the better issue to address. When you're in the midst of your first job, you don't necessarily know any better. I got pretty comfortable quickly and having Cathleen by my side definitely softened the blow of my intense work conditions.

Bottom line: Don't stress your first job. You may love it, you may hate it, but just know that these are only temporary conditions and you should never feel obligated to stick around. Trust me, 10 years from now, your first job—along with a slew of other silly high school sagas—is something that will totally not matter. So go on and live your best life, girl. It's only just beginning.

If you're anything like me, you've probably experienced THESE eight scenarios that demonstrate first job expectations vs. realities.